Scouting report of the Houston Texans based off the study from their games against the Dallas Cowboys and Indianapolis Colts for tonight’s contest against the Pittsburgh Steelers.

– Ryan Fitzpatrick shows the ability to navigate within a muddy pocket but that might be his best trait. His arm is just average and while he threw a couple pretty back shoulder throws to Andre Johnson, I don’t get too excited about his accuracy. There wasn’t much on tape to change the perception Fitzpatrick has.

He has the elite vision required to make Houston’s zone blocking scheme work. Finds the whole and explodes through it.

I love his balance. Able to keep plays alive, even when you’re positive he’s going to the ground. Look at the angle of his body here. 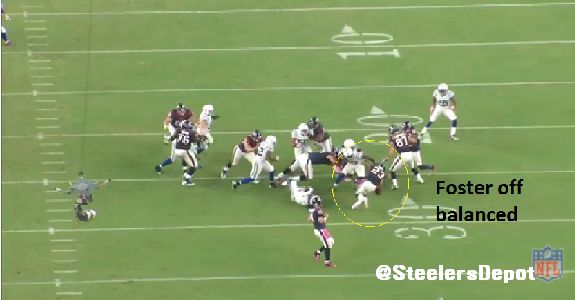 But he regains himself and takes off for a gain off the right side. 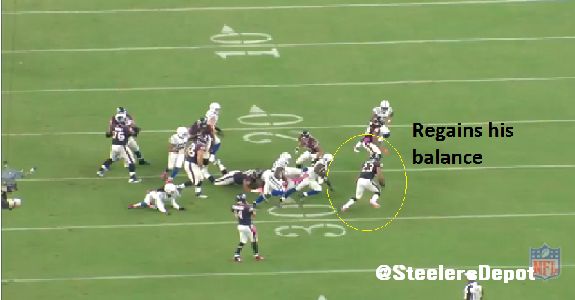 The fear with him, as there is any runner in a ZBS, is the back getting to the second and third level untouched and with a full head of steam. Foster is a severe problem for safeties trying to run downhill or cornerbacks trying to contain. He makes them all look silly. An example below, working against Dallas’ Barry Church. 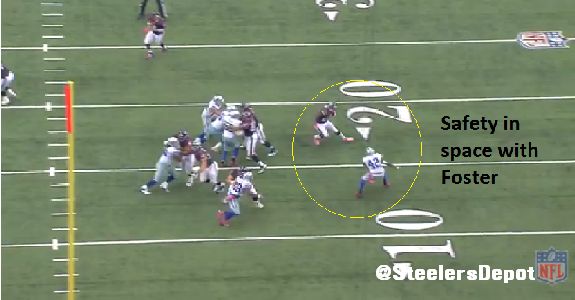 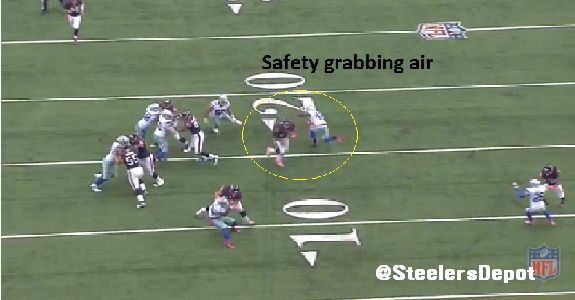 I’m not sure how good of a run defender Brice McCain will be but that could be a second level reason why Cortez Allen was benched. His run defense has been poor and that won’t cut it against Houston. Everyone in the secondary will have to rally and be capable of bringing Foster down in open space. Odds are, Foster is going to see an open field multiple times tonight.

For the negatives, there was one sack against the Colts that could be blamed on Foster, who didn’t check for a blitz and left on his route too early. Six rushers with only five to block. 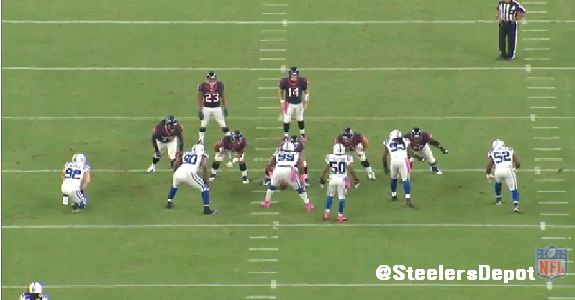 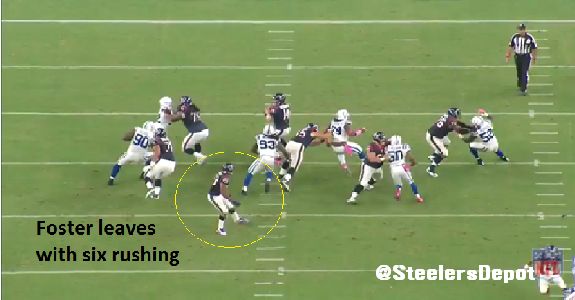 Not much use of a fullback. Rookie Jay Prosch has seen some time but he’s also been used as a third down back in shotgun and even occasionally split out wide. But it’s largely a single back offense.

– The Texans’ receivers don’t do a whole lot for me, either. Andre Johnson is sure and strong handed. Allows Fitzpatrick to throw him a couple “go get it” balls, even with contested coverage. But he’s clearly been on the decline.

DeAndre Hopkins is a YAC threat who can make defenders miss in open space but I wasn’t blown away by his game. Of course, he had just one catch against the Colts so perhaps I picked a bad game. I know he can be a vertical threat with the ability to make circus grabs.

The alarming statistic is how much of the passing games runs through Johnson and Hopkins. If you look back at my study I did on the top two receiver production, where the Steelers finished 4th, Houston led the league with 85.5% of WR receptions from those two. 59 of 69.

Demaris Johnson has eight with Keshawn Martin picking up the other two. The tight ends don’t get involved either. Garrett Graham has 14 grabs for a paltry 98 yards. Despite playing 205 snaps, CJ Fiedorowicz has one catch in 2014. Targeted only three times.

Fiedorowicz is a solid blocker and can stick in space. Helps create a big run for Foster with his blocking downfield. 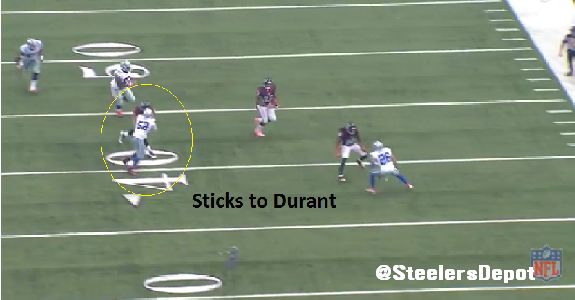 As I mentioned, Foster is the team’s third leading receiver with 16 receptions. And that’s with him missing a week.

– The Texans’ offensive line doesn’t blow me away either. Chris Myers is a veteran center who can move in space. Right guard Brandon Brooks doesn’t fit the ZBS mold at 335 pounds but is an asset. He’s got a strong punch that works well when asked to combo block. Able to knock the backside defender he’s chipping off-balanced, letting the backside lineman reach and secure his block.

However, left guard Ben Jones is a limited athlete that didn’t impress me. Derek Newton is ok but fails to do anything well. Even left tackle Duane Brown didn’t look that great. Houston is very lucky Brooks is expected to play this week. Fill-in rookie Xavier Su’a-Filo looked overwhelmed against the Colts and consistently had difficulty sticking to his blocks.

It’s true of any offense but they can be confused by interior blitzes. Some of them exotic, some of them simple tackle/linebacker stunts. The latter here. Houston opened up in empty against Dallas and it allowed the Cowboys to get pressure on Fitzpatrick. 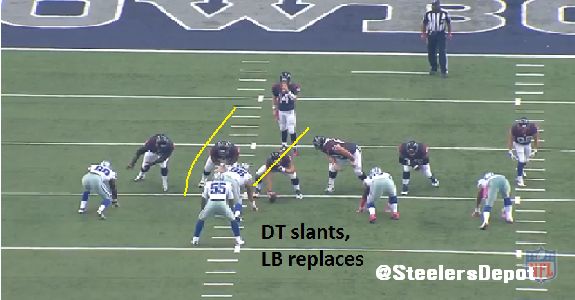 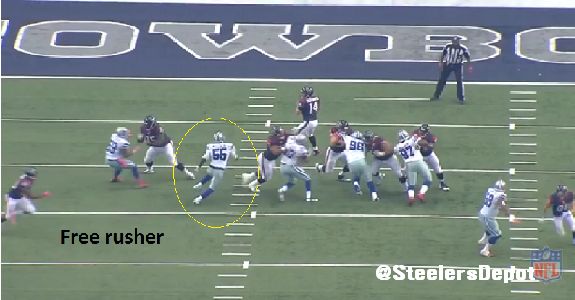 Here’s a 3rd and 8 overload blitz from the Colts. The Texans don’t pick up a single defender. One of the ugliest showing I’ve seen a line put together on a singular play. I can’t even draw up on the screenshot how ugly it is. 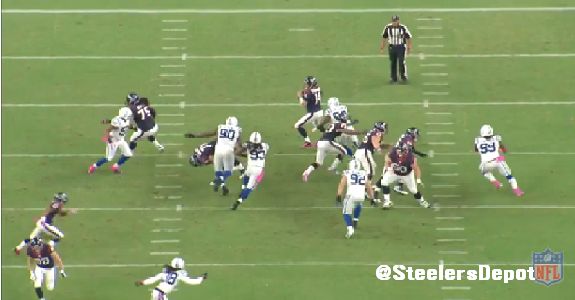 – It all starts with JJ Watt. The picture below sums up the only way you can slow this guy down sometimes. A triple team in pass protection while everyone else is solo’d. 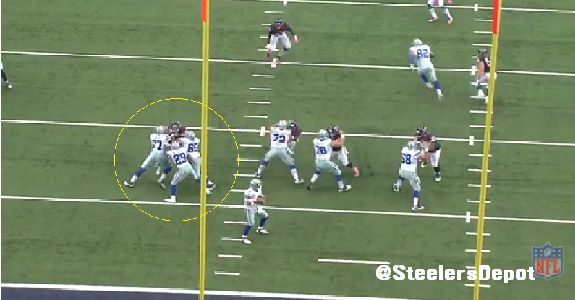 He’s a terror who moves around the line, playing both end spots. It’s not just one lineman that has to gear up for him. It’s a five man mission.

His length creates a headache of quarterbacks even when he’s not sacking them. Here’s him swatting this Andrew Luck pass down. Taking into consideration his height, arm length, and the foot he’s jumped off the ground, it’s safe to say he batted a pass that was nearly ten feet in the air. 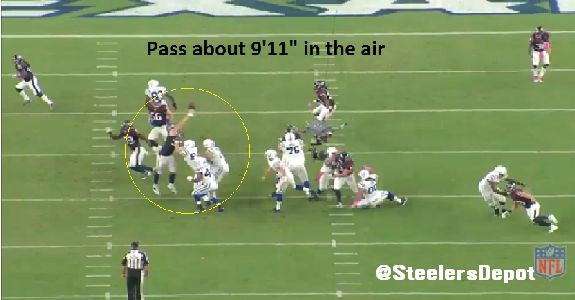 Against the run, he absorbs this double-team by going to the ground, gets to his feet, and knifes inside the tackle to bring down Trent Richardson. 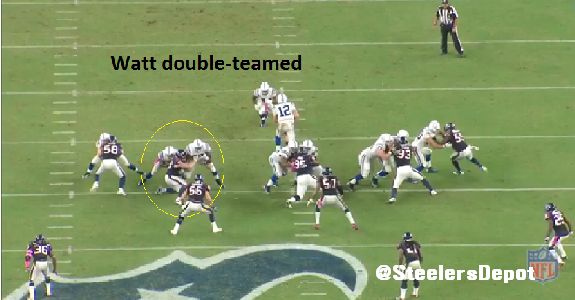 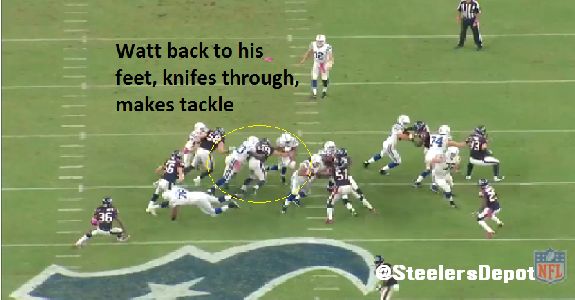 And as you’d expect, he can make you look downright silly in pass protection. 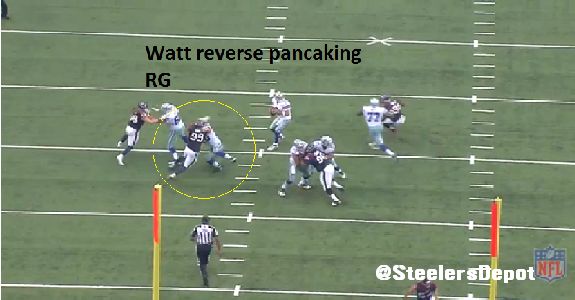 Don’t fantasize about getting a break from seeing 99, either. He’s played on an absolutely absurd 92.3% of the Texans’ defensive snaps. Watt is the only defensive lineman in the league to play 90%+.

It’s a good thing they have him too. The rest of the Texans’ pass rush is anemic. Coming into Week Seven, they were one of three AFC teams with just one player having two sacks or more. Jared Crick is second with 1.5.

On 678 snaps, Whitney Mercilus and Brooks Reed have combined for one sack. Yikes.

The Texans’ defensive line features a rotation. It’s hardly even worth calling anyone “ends” or “tackles” because they all play everywhere. The only lineman to play 50% of snaps are Watt and Crick. There’s a lot of size up front; Jerrell Powe weighs 331, newly signed Ryan Pickett goes 340 (his jersey barely fits him), and though seldom used, rookie Jeoffrey Pagan is a squatty 310.

Brian Cushing missed a few more tackles than I expected to see but still anchors the linebacking core. There’s not a ton else to get excited about. We’ve already mentioned the woes of Mercilus and Reed.

The weakside inside linebacker, the Mack spot, is a serious issue for the Texans. Justin Tuggle replaced an injured Mike Mohamed and dominated the snap count last week with 51. Tuggle lacks functional strength and is a slow-footed linebacker who takes bad angles in the run game. He’s a player worth who should be targeted as the weak link along that front seven.

Here’s Tuggle taking too sharp of an angle on this toss, trying to compensate by going wide, and then getting sealed by the lineman. 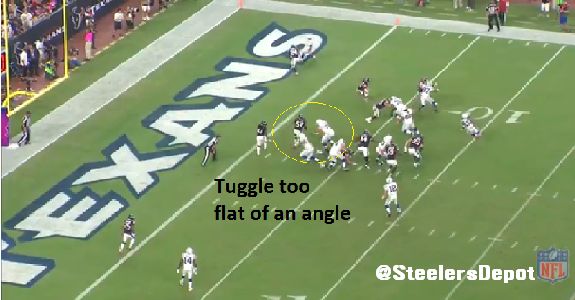 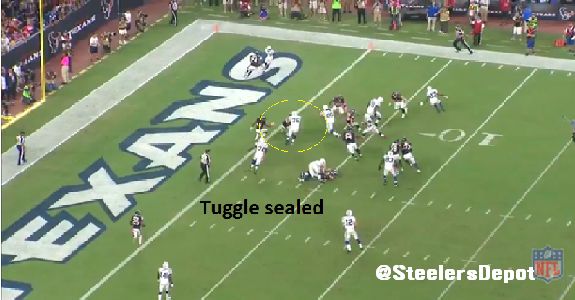 Tuggle is a second year kid out of Kansas State who played QB until the start of his senior season. Ran a 4.86 at his Pro Day. Below average linebacker that should be expected to struggle. Run at him and call tosses his way. Force him to make plays.

– Jonathan Joseph is talented enough to match up against #1 wide receivers. DJ Swearinger is a big hitter that will be placed in the box when the Texans go to dime personnel. He has three forced fumbles in 2014. Certainly not a number to scoff at.

Kareem Jackson reminds me a bit of William Gay. A player that’s received a lot of criticism but a sure tackle willing to support the run.

It appears they’re trying to find an identity to an identity of a nickel corner. AJ Bouye, Daryl Morris (who has been injured) and Andre Hal have all seen 100+ snaps. No one has stood out.

– As a whole, it’s a defense that is vulnerable to the big play. In each of the Texans’ six weeks, they’ve allowed at least one 40+ yard reception. Even to the Oakland Raiders. Oakland.

It came last week in the form of a 49 yard catch by TY Hilton. Swearinger bit on an out route, opening up the post. 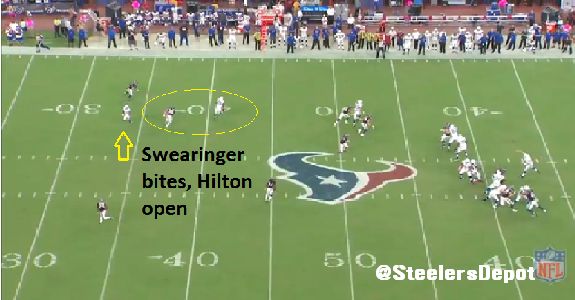 It’ll be a disappointment if the Steelers can’t cash in tonight.

– Schematically, it’s a unit that will run some simple stunts on its linebacker blitzes. Slant the end and have the linebacker replace through that gap. Example below. 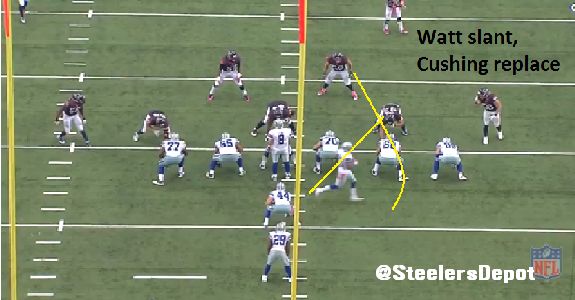 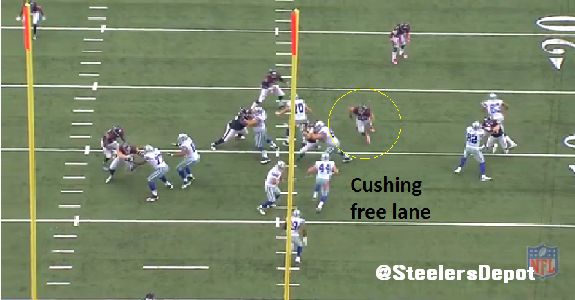 It’s not relatively difficult to pick up but puts the onus on Le’Veon Bell and LeGarrette Blount to be solid in pass protection should there be a free rusher.

One interesting note stems from an audible by the Colts in the red zone. Luck flips the formation from a two back, pistol look to a traditional shotgun with Dwayne Allen motioned to split out wide.

The Texans try to check in response but there’s obvious miscommunication pre-snap and it shows during the player. Coby Fleener is up wide open for an easy six. 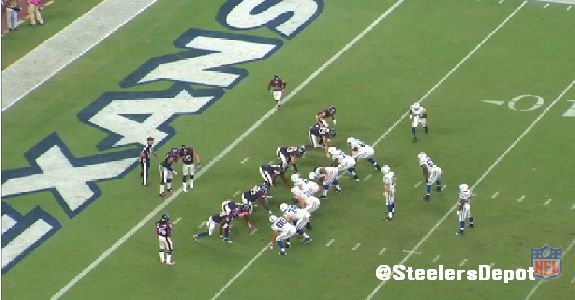 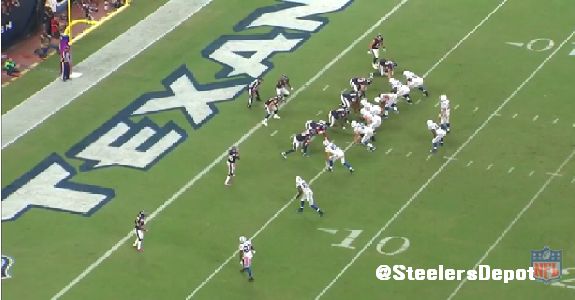 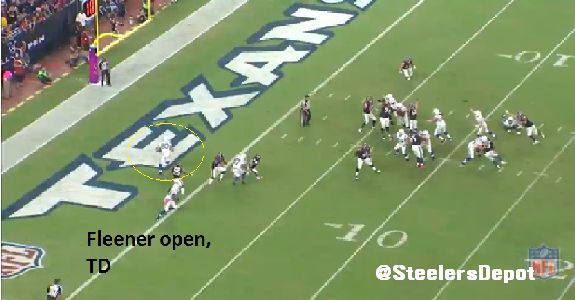 I’d try it again if presented the chance tonight. Especially given the Steelers’ red zone woes.

– Added this category to point out three things.

Linebacker Jeff Tarpinian has two forced fumbles on seven special teams tackles, both against the Cowboys. Watch out for him running down kicks and punts. Core special teamer. Had brain surgery a few years ago and came back. You know toughness isn’t an issue with this dude.

– Punter Shane Lechler is a former quarterback who threw for over 5,000 yards in high school. He’s thrown three passes in the last three years, including earlier this year against the New York Giants. It was a ten yard pass on 4th and 1 form the Texans’ 39 on their first series.

The tell? Upback Alfred Blue didn’t take a step to the inside off the snap. He does on every other play. It’ll be important for the Steelers’ left end man (typically Terence Garvin) to watch Blue on every punt on the off chance of another fake.

– The Texans’ kick return unit differs from the Steelers. They have six in their front row and effectively works as a 6/1/2/2 return unit. The Steelers have 5/2/2/2. 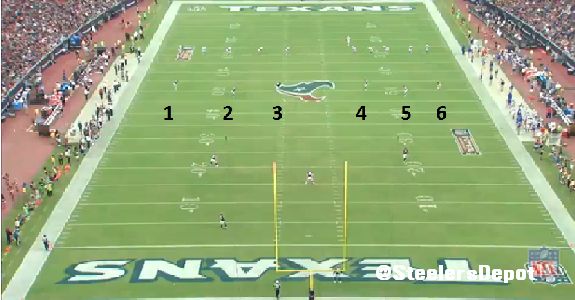