Scouting the Cleveland Browns during their comeback victory against the Tennessee Titans Sunday. It’s just one game, coupled with what we know about them from Week One. As I’ve always said, a little bit of knowledge is a dangerous thing. Just keep that in mind throughout the report.

– Brian Hoyer is still the real deal. Hasn’t regressed and I doubt he does very much the rest of the year. Feels the rush well and can climb the pocket. Strong arm who can throw the deep out on the money. Arm doesn’t limit the playbook one bit. Shows accuracy and can fit passes into tight windows. Stands tall in the pocket and will take a shot to make a throw. Accurate on the move. Not much about his current game I don’t like.

Led the Browns on a nine play, 90 yard drive in 2:25 while using just one timeout at the end of the first half, culminating in a touchdown pass to Jim Dray. Cut the Titans lead to 28-10 before the break.

Love the ball placement on this 31 yard completion. Outside shoulder, no chance for the CB to make a play on the ball. Money. 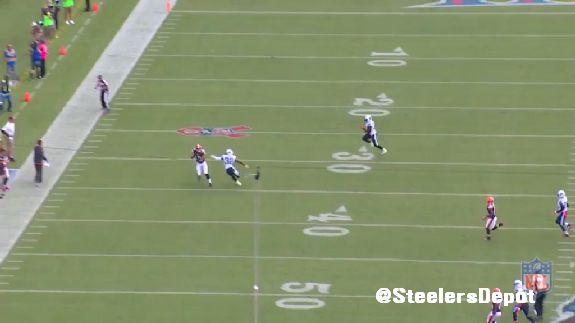 And on the Browns’ final, game-winning drive, Hoyer comes off his unavailable first read, has his eyes/feet connected, and finds his next read. Laser between two defenders for a 23 yard pickup. Brought Cleveland to the Titans’17 and in prime position to win. Which they did. 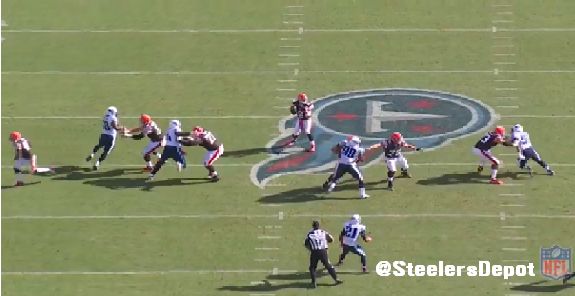 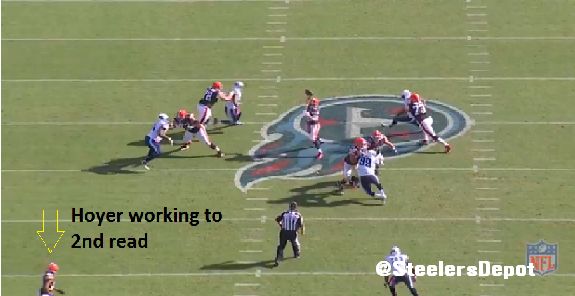 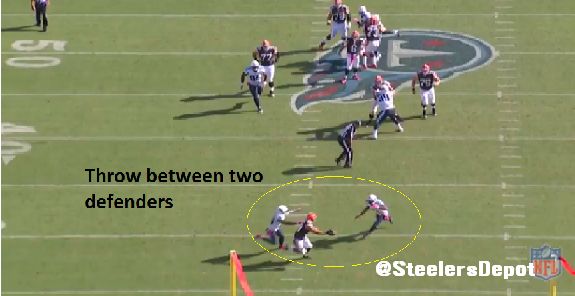 – Their running backs are fun to watch…as long as you’re not playing them. As Mike Tomlin noted during his Tuesday press conference, Ben Tate, Isaiah Crowell, and Terrance West are averaging at least 4.4 YPC.

Tate leads the way, picking up 124 yards on 51 snaps last week. Difficult to bring down and capable of making something out of nothing, he’s an obvious threat.

However, he does have a tendency to be careless with the football. Nine fumbles in less than 500 carries. Probably because he does things like this… 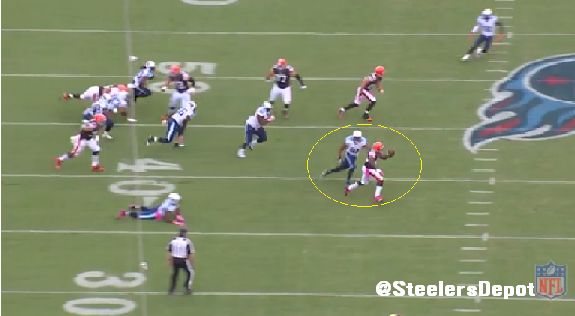 Goal here is for the first player to secure the tackle while the rest of the defenders rally and try to punch it out. Make Tate pay for his carelessness.

Crowell and West are a couple of five year olds on a sugar rush. They run around like crazy. But they’re slippery and can wear you out. Crowell played 15 snaps with West playing 11.Both backs are still learning when they need to plant their foot in the ground and get upfield once they reach the second level. Predictable growing pains there but overall, a good problem to have if you’re Cleveland.

Neither see a lick of time on special teams, meaning they’ll get their touches on offenses to justify giving them a helmet. You will see all three Sunday.

Crowell is the more talented of the two rookies. Heck, in terms of just talent, he might be better than Tate. Don’t forget he was a guy who started his career at Georgia. Not Alabama State.

Ray Agnew is something out of a football comedy movie. Short, squatty fullback from a small school – Southern Illinois – who waddles when he runs. But he’s an effective lead blocker and sees plenty of snaps. Used on about one-third of the Browns’ snaps in 2014.

– As Tomlin also pointed out, Travis Benjamin and Taylor Gabriel are coming on strong. An UDFA who had more than 3,000 yards at Abilene Christian, Gabriel had six catches for 95 yards last week. Benjamin did serve on the punt return team but muffed one and was promptly replaced by Jordan Poyer.

Benjamin, Gabriel, and Andrew Hawkins all look like the JV squad- none taller than 5’10, none heavier than 180 pounds – but they’re high effort players who get their nose dirty as run blockers. Surprisingly effective and the team uses angles to help them win against DBs.

– Not much to note at tight end. Jordan Cameron is still a matchup problem. Even though Norv Turner is gone, pretty sure I saw at least one of his classic “Bang 8’s” to Cameron.

Gut feeling but Jim Dray is probably going to have one red zone/third down catch that is going to make every Steelers’ fans scramble to figure out who the heck he is. Always how this seems to go.

– Offensive line is generally unchanged. Although Alex Mack had his hands full with former Steeler Al Woods last week, he’ll likely bounce back Sunday. Joe Thomas is elite while Joel Bitonio looks better and is a second level threat. Mitchell Schwartz is still a liability and a position the team must address during the offseason. Upper and lower body don’t work in sync. Jason Worilds is playing better and needs to dominate Schwartz tomorrow.

– Philosophically, not much has changed. Though that doesn’t make it any easier to defend.

I swear Coach Boone is running the show. Feels like the Browns have only five different plays with just a million variations. It’s crazy frustrating to defend. Like Novocain.

Zone runs abound. Inside and outside zone. Split zones that have huge cutback lanes. Safeties being able to come down and fill will be critical. Looking at you, Mike Mitchell. One obvious tell for a split zone. In 13 personnel with a TE in a three-point stance but off the line, as shown below, is a near guarantee, for a split zone.

Means that TE is pulling and kicking out or cutting the EMOL. Usually get a toss with the back countering to the pulling tight end’s side. 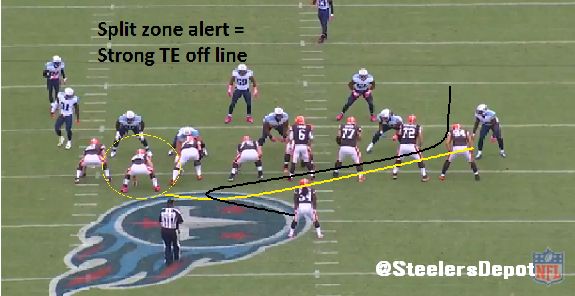 They can dress it up a couple different ways. Motion the wide receiver to behind the offensive line and have him block. 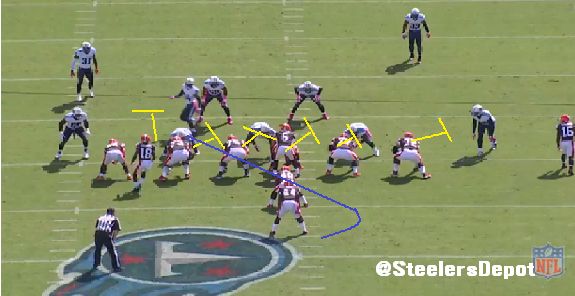 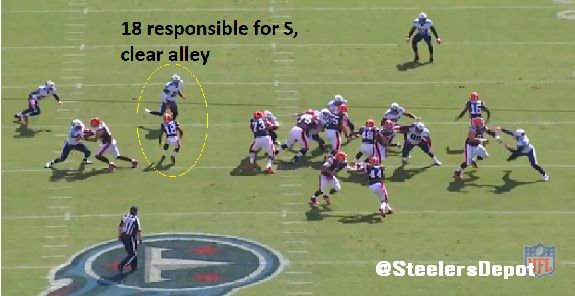 And times where they’ll line up in 21 personnel while still running split zone. Use the fullback as window dressing to get the linebackers to bite, thinking it’s Lead Strong.

They’ll use those staples to set up their boot game. If I remember correctly, Cleveland ran nine boots against the Steelers Week One.

One alert are both receivers lining up in tight splits. Between the numbers. They’ll often boot right and have the weakside No. 1 bend his route to the QB.

When defenses start bringing that safety in the box to fill against the run, the bend becomes very potent. Receiver will find any soft spots in zone coverage while corners can’t drive downhill in time to make a play in man coverage.

It’s a mess to try and defend. They’ll boot off zone stretches as well as those split zone blocks. Difficult to discern what is run or pass. That’s what makes playaction effective. It’s one big magic trick.

We see it here below. 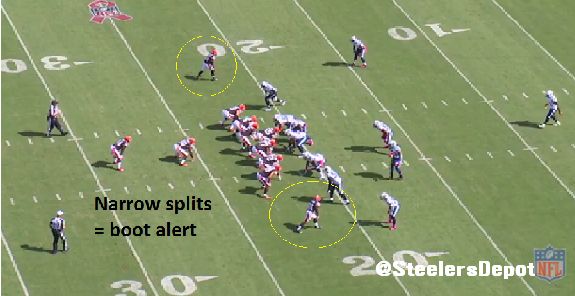 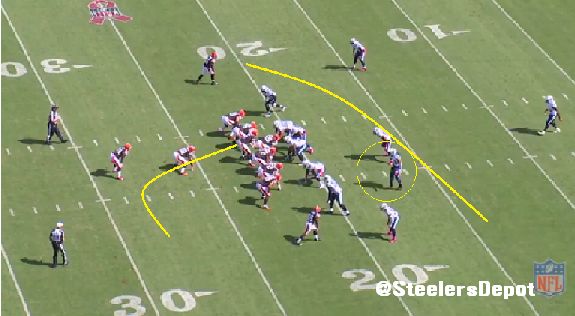 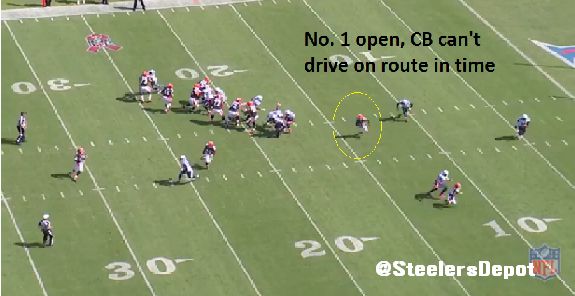 When that safety comes into the box, he loses sight of the receiver. Taken out of the play. That No. 1 becomes impossible to cover.

Bottom line, you can either play two high and get gashed against the run or play single high and lose against these boots.

The most valuable Steeler on Sunday is Jason Worilds. Assignment wise, he’s going to have his hands full. Will need to spill playside runs. Will have to hold backside contain on runs away from him. And defend these boots. Tennessee did a nice job against it and it came via the bootside defender. Being able to pressure Hoyer and not let him be able to drive the ball downfield.

– Luckily for them, the Browns came into the year with a ton of depth along the defensive line. It’ll be tested Sunday. Phil Taylor and Billy Winn are out (Winn also sees time on special teams, an underrated loss). Ahtyba Rubin is questionable. What’s left is: John Hughes, Desmond Bryant, and Armonty Bryant. Desmond didn’t come off as particularly impressive. Armonty is essentially another rush linebacker. Listed at 264 pounds but extremely fluid with a plus motor.

The defensive line will have unconventional shifts and isn’t stagnant. Will adjust versus motion. Have a zero tech, a one tech, and a three tech in this front below. 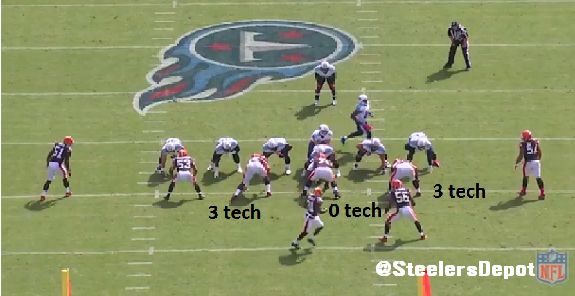 – At linebacker, Jabaal Sheard will line up at LOLB and ROLB. He’s a handful. Understands leverage and has violent, active hands. Marcus Gilbert and Kelvin Beachum must be prepared.

Barkevious Mingo hasn’t been asked to rush much the last two games and truthfully, I see him as a more valuable special teamer than defender. Unknown Eric Martin could get some playing time, especially if Paul Kruger is out. Kruger and Sheard are a dangerous combination.

Rookie Christian Kirksey played about two-thirds of the snaps at ILB alongside Karlos Dansby last week. Craig Robertson picked up the rest. Dansby is a heady player who finds the runner quickly and overall, is a sure tackler.

– Two players to attack in the secondary. Buster Skrine should have a huge target on his back. Allowed two touchdowns last week against the Titans. Corner route in the back of the end zone and bit on a nasty double-move from Justin Hunter that resulted in a 75 yard score. 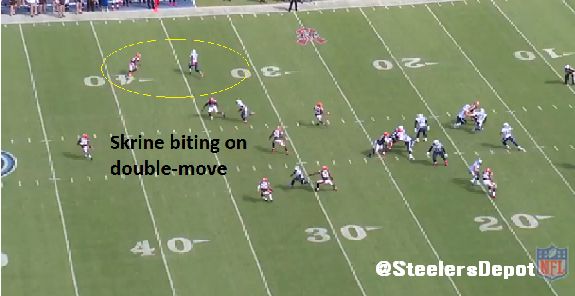 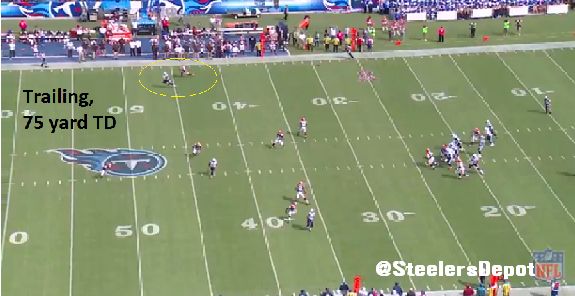 Should have allowed a third two after biting on a double-move against Dexter McCluster early in the game but Jake Locker overthrew his receiver in the end zone. Locate #22 each play and attack him. 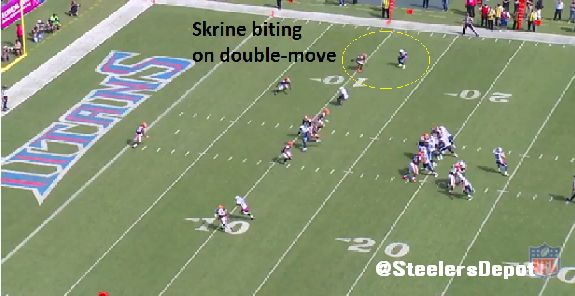 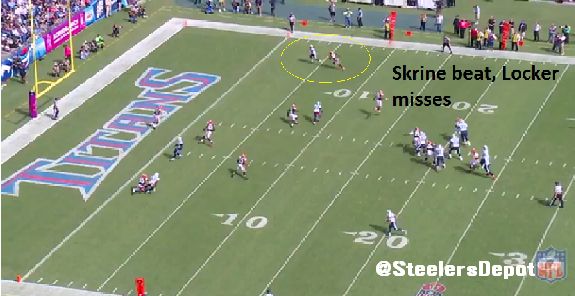 Although he wasn’t terrible last week, K’Waun Williams is probably playing more snaps than the Browns would like. 36 (also his uniform number) last week and that was with Joe Haden active. Got beat deep down the left sideline and would’ve allowed the catch had the receiver not lost possession going to the ground. 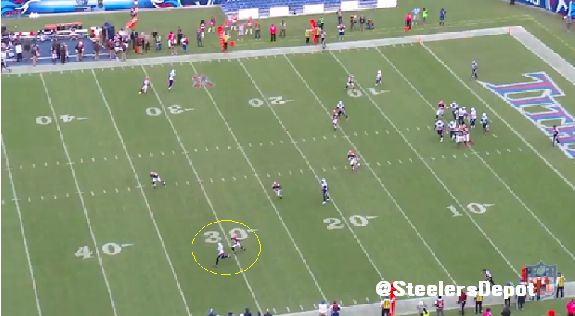 Philosophically, I don’t have much. But on two 3rd and 15s, the Browns played an extreme prevent defense. Forced both throws underneath and well short of the sticks. 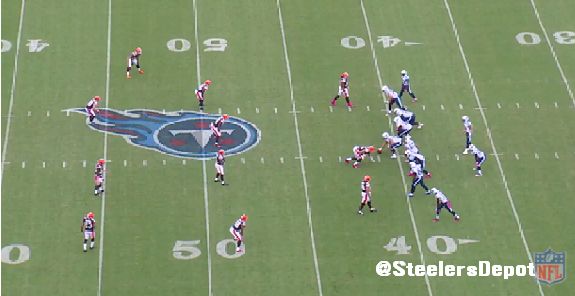