If you were like me, you were quite surprised to see the Pittsburgh Steelers throw the football on the fourth and inches from the Indianapolis Colts eleven yard-line with 5:21 left in the fourth quarter. The play worked, however, as quarterback Ben Roethlisberger hit tight end Heath Miller in the back of the end zone for a touchdown.

On that play, the Steelers rolled out their 22 personnel grouping that included running back LeGarrette Blount, fullback Will Johnson and two tight ends, Miller and Matt Spaeth. Even wide receiver Antonio Brown was off of the field for that play as Marcus Wheaton was the lone receiver. This looked and smelled every bit of a run.

After the snap, Roethlisberger fakes the fullback dive to Johnson and as you can see in the pictures and gifs below, that effectively sucks in the Colts inside linebackers. Blount flairs out to the right flat and while it might be hard to believe, he’s the primary receiver on the play and this is evident by Roethlisberger staring him down as he rolls out to the right. 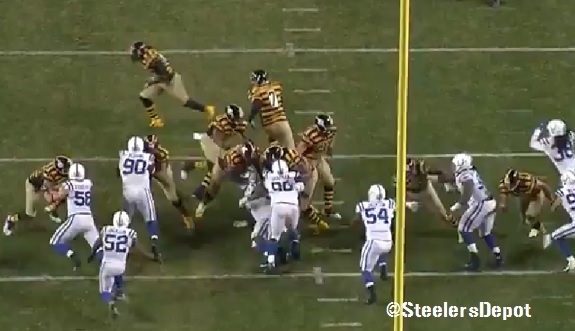 Colts safety Mike Adams (#29) is not fooled at all by the dive and he has Blount blanketed enough that Roethlisberger doesn’t want to chance the throw. 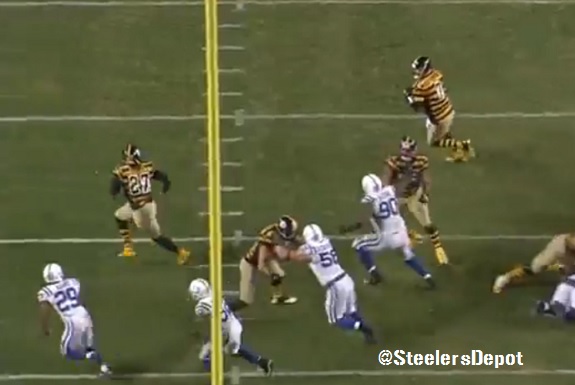 While this is a three man route, it’s obvious that Roethlisberger’s second read is Miller. You can see this to be the case as Wheaton hasn’t finished his post-corner route. That route’s purpose is to take Colts cornerback Greg Toler (#28) completely out of the play. 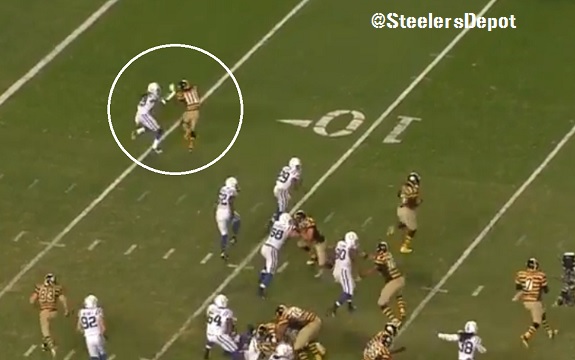 Being as both of the Colts inside linebackers have run stop duties, that leaves outside linebacker Bjoern Werner as the one responsible for Miller. Look at how well Miller sells the run block initially in the pictures below. Once he releases into his over route, it even looks like Werner tries to grab him in order to slow him down. 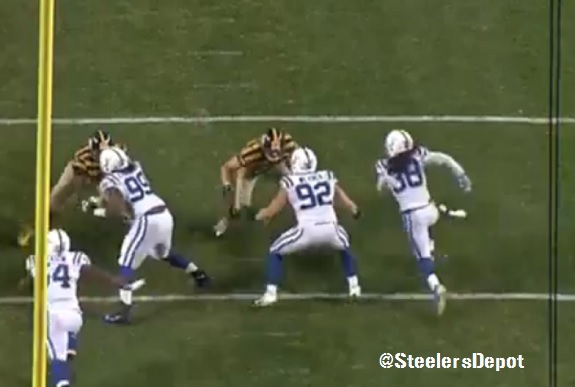 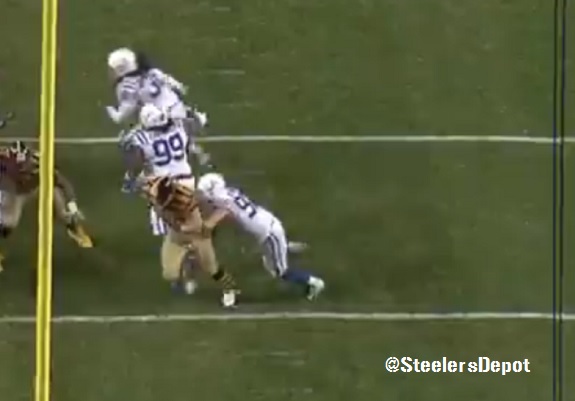 All that’s left for Roethlisberger to do once he comes off of his initial read to Blount is for him to make a good throw to a wide open Miller. Roethlisberger did just that and he had his sixth touchdown pass of the game as a result.