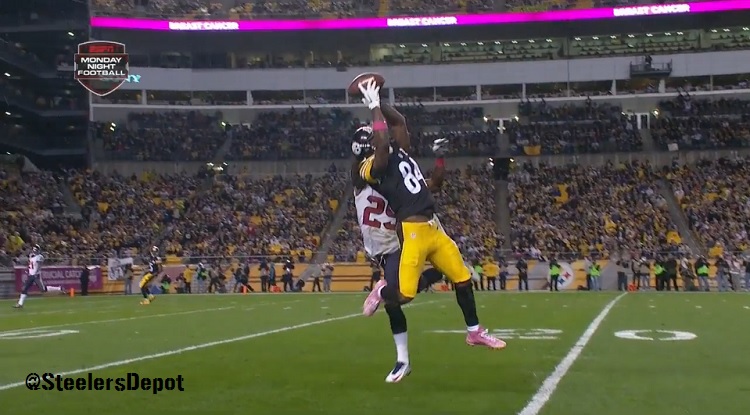 On a recent edition of “America’s Pregame” on FOX Sports Live, former NFL linebacker turned analyst Kirk Morrison said he believes Pittsburgh Steelers wide receiver Antonio Brown shouldn’t be considered underrated as he merely is a product of the system that he’s in and the quarterback that he plays with.

“Antonio Brown is the benefactor of the Ben Roethlisberger system,” said Morrison, who played eight years in the NFL with three different teams. “We don’t have to worry about Todd Haley or Bruce Arians, it’s the quarterback that’s able to elude rush and throw the football down the field .

Morrison should perhaps watch more Steelers tape as Brown is a great route runner who possesses a huge catch radius. His ability to stop on a dime after the catch was also on display Monday night against the Houston Texans as well.

I’m guessing that the 43rd ranking that Morrison is referencing to as it pertains to yards after the catch is based on yards after catch per reception. Last season Brown finished tied for 12th in that stat when compared to other wide receivers in the league and he was 23rd in the league in 2012.

When asked if he considers Brown to be one of the top-five wide receivers currently in the league, Morrison said he doesn’t.

Sam Monson of Pro Football Focus gave several reasons Wednesday as to why Brown should indeed be considered one of, if not the best, wide receivers currently in the league.

Here is a sampling of what Monson wrote about Brown.

Brown has more than that in his arsenal however, and despite a relatively diminutive stature is still able to make the kind of plays that are usually reserved for much larger receivers. The great thing about being 6’5 is that you have a natural built-in advantage over most defensive backs in terms of wing span and catch radius. All that does is increase your margin for error, but the ability to actually high point the football and adjust to it correctly in flight isn’t dependent on that kind of superior size.

Monson also went on to call Brown a “modern day version of Jerry Rice” and that certainly is high praise. Me thinks Morrison better get back in the film room.