The Pittsburgh Steelers didn’t use Darrius Heyward-Bey often in last week’s games, though he did manage to log 16 snaps between the two. He played nine snaps on Thursday night against the Baltimore Ravens, the majority of which came toward the end of the first quarter and into the second quarter of the game.

Of the nine snaps, only four of them came on running routes. The other five occupied Heyward-Bey as a blocker, which is what helped get him on the roster.

Four of those runs came on wide receiver end arounds, though on one occasion he was on the field to block for a wide receiver screen pass. While there’s little to be said for his performance in the passing game—receiving zero targets—he found mixed success as a blocker.

Early in the game, midway through the Steelers’ opening drive just inside their own 40-yard line, Todd Haley broke out the first of five wide receiver end arounds, which went to Antonio Brown on a first and 10 play.

With Heyward-Bey lined up on the left side, Brown motioned from the slot left to tucked behind the tight end on the right side. On the snap, he spun around as Ben Roethlisberger used a play action and pitched the ball instead to Brown. Heyward-Bey was able to get downfield to block down on Jimmy Smith, though Heath Miller’s efforts stopped the play after a nine-yard gain.

The Steelers began their next possession on the last play of the first quarter, which was a designed screen for Markus Wheaton. Prior to the snap, the Steelers had three receivers on the right side before Justin Brown motioned to the left. Wheaton was at slot right, with Heyward-Bey far to the outside.

This time, Heyward-Bey didn’t find as much success working against Smith. After Wheaton received the ball and looked to set up his block, Smith was able to drive Heyward-Bey back to nearly level with Wheaton, and made the stop himself for just a one-yard gain. 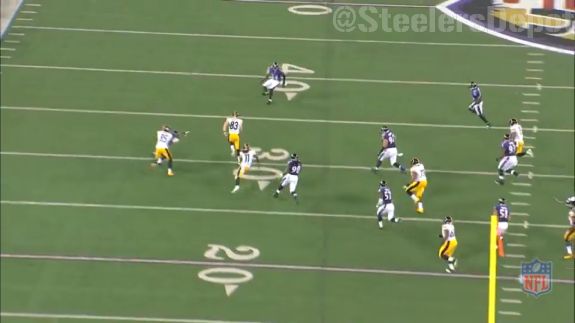 On the very next play, Heyward-Bey was blocking downfield on an end around for Wheaton when he was flagged for holding against cornerback Asa Jackson. The play went for 21 yards, but because of the hold, 12 yards down the field, it turned into just a two-yard gain and a re-do of the down. 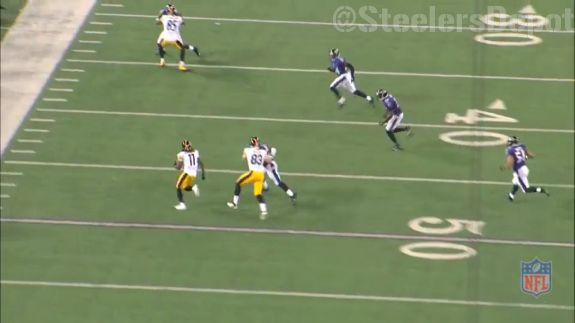 Prior to the snap, Wheaton began motioning to the left, with Roethlisberger pitching to him in the backfield. The cornerback Smith was running with Heyward-Bey down the field, getting turned around only five yards past the first-down marker, and by that point the veteran receiver was in position to neutralize him as Wheaton picked up 10 yards on the play.