Pittsburgh Steelers cornerback Cortez Allen was signed to a new contract on the eve of the start of the 2014 season in a move no doubt prompted by the very real concern that they had virtually no cornerbacks signed through the 2015 season.

Both Ike Taylor and William Gay are in the final years of their contracts, and no other cornerback on the team outside of Allen has any meaningful experience with the team. Allen also has the most upside of all the cornerbacks in question.

You might not know that watching his play so far through the first two games of the season, however.

2014 was supposed to be Allen’s breakout season, during which he came into his own as a legitimate starting cornerback in this league. That was supposed to be the case last year as well after a promising first two seasons, but he’s seen only mixed success since then.

The fourth-year corner was benched last season after coming back from injury due to poor play, and he has been struggling early this year as well. His performance against the Baltimore Ravens in particular left much to be desired.

As a matter of fact, he was hit with a double dose of failure on the Steelers’ first play of the game on defense. Playing 10 yards off the ball in coverage of Steve Smith, Allen started in to tackle the catch, but the veteran receiver had already turned.

Allen was able to get an arm around him, but ended up grabbing his facemask as Smith slipped from his grip. He gained 14 yards on the play, and a facemask penalty on Allen gave the Ravens an extra 15 yards, moving the ball from the 15 to the 44-yard line. 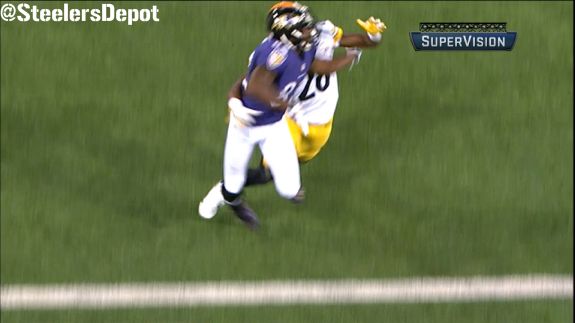 Later on the same opening offensive drive for the Ravens, Baltimore had first and 10 from the Steelers’ 26-yard line when Joe Flacco decided to test Allen deep, in tight one-on-one coverage on Smith at the line. The 6’1” corner was flagged for pass interference, and spotted on the three-yard line, a net gain of 23 yards. In all, Allen was flagged twice on the opening drive for a total of 38 yards.

Early in the second quarter, with the Ravens already across midfield, Allen was working on the perimeter of a run off right tackle by Justin Forsett. After making one tackler miss, Allen was caught flat-footed and slow to pursue, hardly mustering an attempt at an arm tackle that the running back easily avoided.

Toward the end of the drive, Flacco looked Smith’s way in the end zone again, and the veteran was able to slip behind Allen, but fortunately for the cornerback, the ball was overthrown, and Smith could only get a hand on it. A better throw could have been six.

On the first play of the Ravens’ second possession of the third quarter, Jacoby Jones was able to manhandle Allen down the field on another run off right tackle. Allen wasn’t able to make a play on the runner, and the play went for 10 yards. 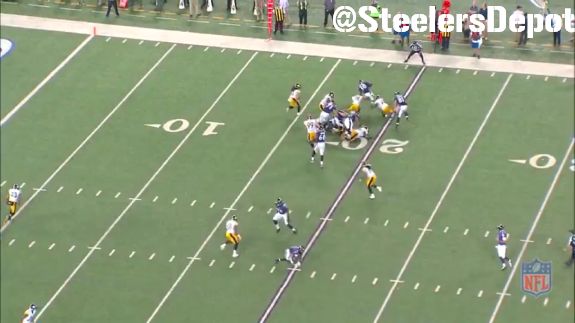 Early in the fourth quarter, Allen had a shot at making a tackle in the run game against running back Bernard Pierce, coming in unblocked, for just a two-yard gain. He lowered his head too quickly, however, and Pierce was able to stiff arm him to get by before being forced out of bounds by the safety.