The Pittsburgh Steelers lost three starters on defense last Sunday night against the Carolina Panthers. While they may have won that battle, it’s yet to be determined if they still have the fighting force to win the war.

Perhaps none of the replacement troops will play as significant a role as Arthur Moats, the low-budget free agent acquisition who is coming in to replace Jarvis Jones, the second-year outside linebacker who suffered a wrist injury while registering his second sack of the year, and will miss at least the next eight games.

While the Steelers did re-sign James Harrison last week, it’s certainly unlikely that he sees much playing time today after being so recently retired.

More than that, Moats joined the Steelers not conceding that he would be destined for a backup role. He’s being given his chance to start now, but he already got off to a good start filling in for 30 snaps a week ago.

One thing he managed to do with reasonable consistency throughout the second half, which the Steelers have been struggling to do, is generate pressure on the quarterback, or at least get into the backfield. Moats was able to get around left tackle Byron Bell on the play highlighted above and get to Cam Newton, but not before the quarterback released the ball. 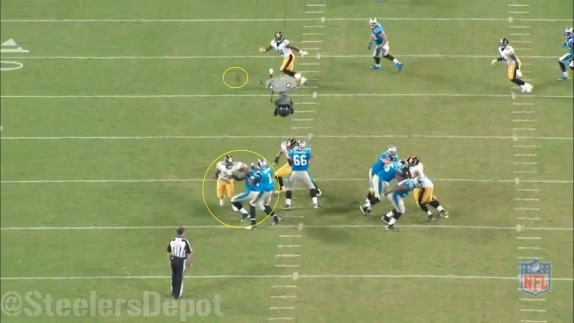 Newton looked for Kelvin Benjamin deep on the next play, targeting him in the end zone, but the 5’9” Antwon Blake was able to get under the arcing pass. This had something to do with Moats for sure, who bull rushed Bell back into Newton’s face, influencing the elevation the quarterback had to put on the ball.

On the following play, the free agent signing got to Newton for a third straight time, this time evading the pulling right guard for the pressure. Moats knocked the quarterback down as he threw incomplete to his right, off his back foot.

By the end of the third quarter, he was really starting to get the hang of this whole pass rushing thing, and finally broke through for the sack. Moats inched inward at the snap before rushing inside and catching left guard Amini Silatlou, driving him backward before managing to turn him. The linebacker then was able to get a hand on Newton’s jersey, eventually riding him down for the sack.

On the following Panthers drive in the fourth quarter, Moats lined up on the left side in an unconventional formation, doing the same thing to the right tackle that he did to the left guard for the sack, only this time it took a bit longer, and Newton was only able to get the ball away as he was brought down.

Back on the right side late in the game, Moats came in unblocked with the left tackle on a double team and the running back failing to provide even a chip. The result was another quarterback on the ground, only this time it was Derek Anderson after Newton had tasted the field one too many times on the drive before.

Although the Panthers’ offensive line is not the most daunting task the Steelers will face, Moats was arguably the team’s best pass rusher on the day, along with Cameron Heyward. Granted, by the time he came into the game, Pittsburgh was playing with a significant lead, and he spent much of his time in the game pinning his ears back and rushing.

But if the Steelers can balance his pass rush with Harrison’s run-stopping ability, I believe they should be able to weather this storm. Moats may even be their top option on the right side for this season, regardless of injury.