Pittsburgh Steelers quarterback Ben Roethlisberger had a rough game Thursday night against the Baltimore Ravens as he was 17-of-31 passing after starting the 5-of-6 on the opening possession.

While he did have 14 incompletions in the game, not all of them were on him. Below is a break down of all of the incomplete throws.

Roethlisberger’s first incompletion of the game came on his very first throw as he was short to wide receiver Antonio Brown with a back shoulder throw down the right sideline. 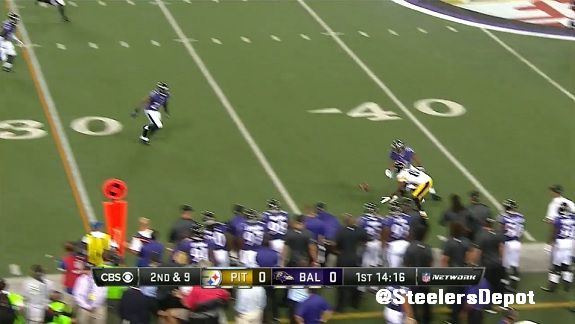 Roethlisberger’s next incompletion didn’t come until the Steelers next possession when he threw behind a wide open Justin Brown on third down and one. 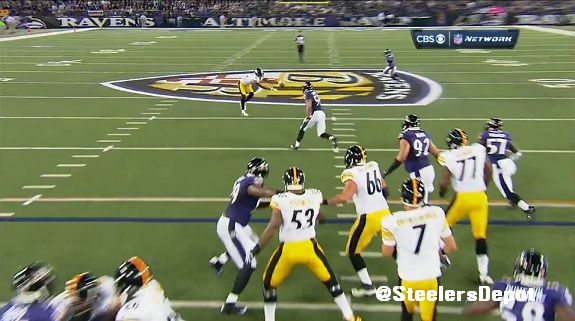 Roethlisberger’s third incompletion in the game was a throw away pass. His fourth one came deep in Ravens territory on second down and it was wide to Justin Brown on an out right. It’s hard to know for sure, but the television angle makes it look like the second-year wide receiver hesitated coming out of his break instead of continuing on to the sideline. Here is a bad shot of the miss below. 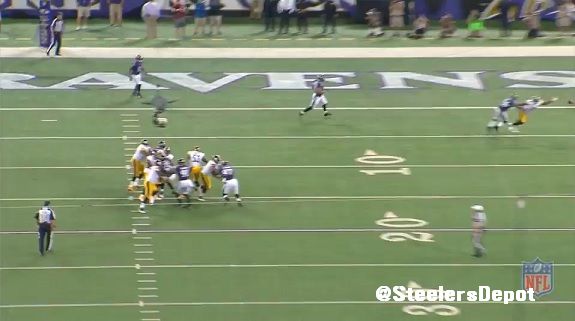 The fifth incompleted pass appears to have been all on Roethlisberger, who sailed one way over the head of tight end Heath Miller in the middle of the field. I have a gif of this throw below. It was a third down play as well. 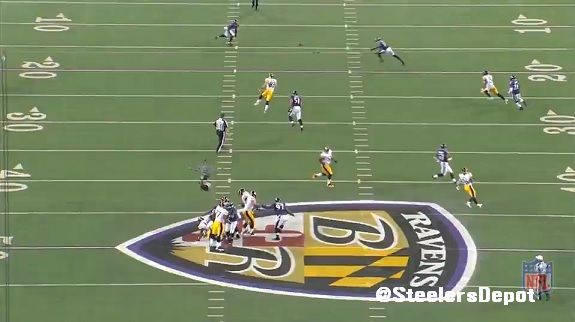 Roethlisberger’s next incompletion didn’t come until late in third quarter on second down with his team trailing 17-6. The animated gif below shows Roethlisberger getting rid of the ball before Markus Wheaton comes out of his break. Being as where the ball landed, I’m almost certain that Roethlisberger was expecting Wheaton to break out t the first down marker. 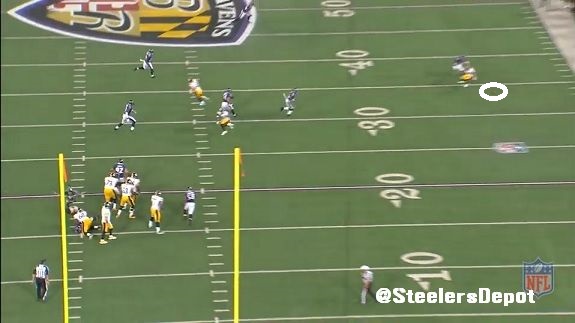 On the very next play, Roethlisberger was incomplete to Antonio Brown, who was tightly covered on the play. The ball just barely cleared the helmet of the Ravens defender and brown couldn’t locate it in time. 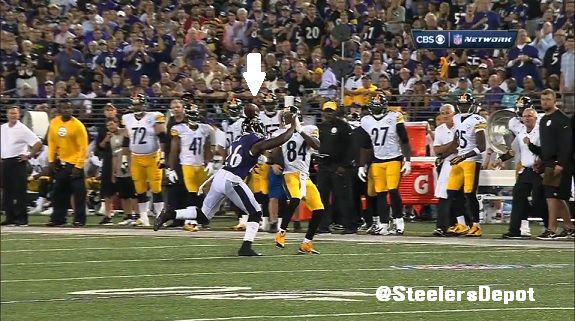 With 10:41 left in the fourth quarter, Roethlisberger again missed connecting with Wheaton. While the throw was behind the second-year wide receiver, it did hit his hands. It would have been a tough catch, but I think Wheaton should be charged for a drop on this one just the same. 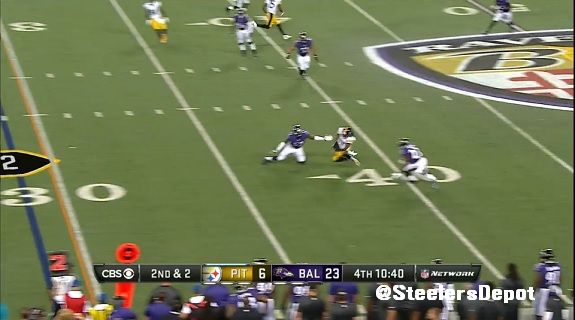 Roethlisberger would finish this drive with three more incompletions. This first was a low dump off to running back LeGarrette Blount out of the backfield that was uncatchable. In Roethlisberger’s defense, he did have a free rusher coming, but still probably should’ve connected easily with Blount. 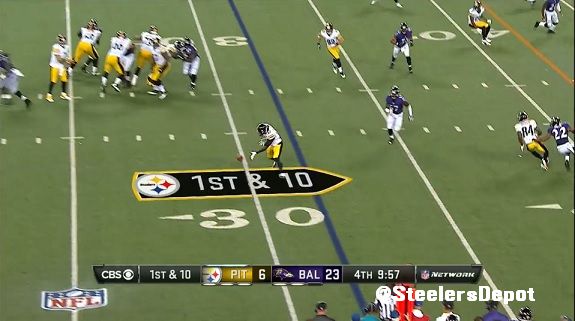 On the very next pass to Antonio Brown, Ravens cornerback Jimmy Smith had excellent coverage. However, the ball hit Brown right in the hands and it’s a pass he probably should’ve come up with. A still and a gif are below for you to judge. 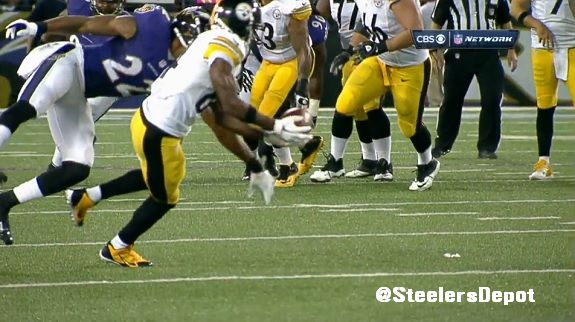 Roethlisberger had to scramble on the next play and threw incomplete to Miller. the pass was easily contested, but the veteran was able to get his hands on it. 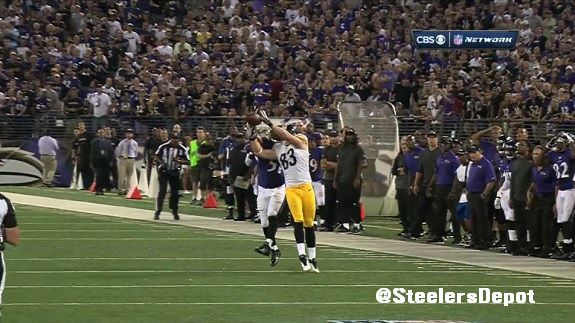 With 4:25 left in the game, Roethlisberger threw way behind a crossing Antonio Brown on first down. 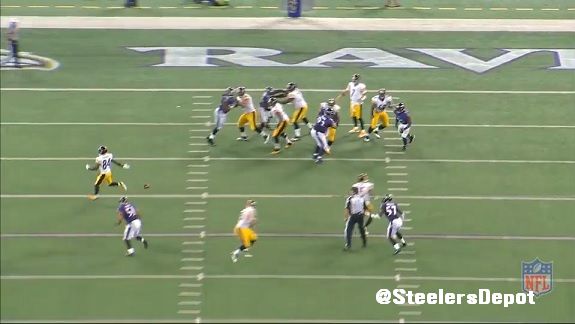 Two plays later, a scrambling Roethlisberger flipped a pass forward to Justin Brown, who was not ready for it. The ball was catchable nonetheless and the young receiver needs to start expecting the unexpected when playing with Roethlisberger moving forward. 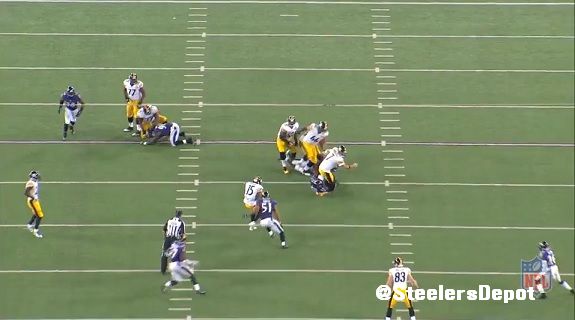 Later on in that final drive, Roethlisberger threw way wide of Miller on first down from the Ravens 26 yard-line. 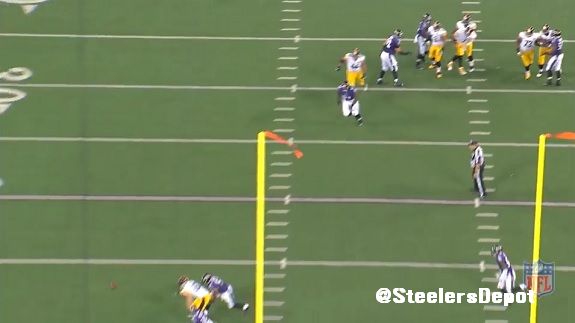 Two plays later, Roethlisberger’s final pass attempt of the game was intercepted by Ravens defensive tackle Haloti Ngata after he deflected it up at the line of scrimmage. There’s no need for a picture or gif of that.

In total, you could probably label seven or eight throws by Roethlisberger Thursday night as poor ones. A few of his incompletions, however, probably should go on the receivers. It was a bad night for both sides of the football for sure.