Second half game notes from the Pittsburgh Steelers 31-21 loss to the Philadelphia Eagles Thursday night.

– 2nd of the half. Steelers in 12 personnel, two receivers to the offense’s left. Justin Brown is in the slot next to Antonio Brown.

– Inside zone. Le’Veon Bell with a poor decision. Bounces the run outside when he obviously had a lane to plant and get upfield. 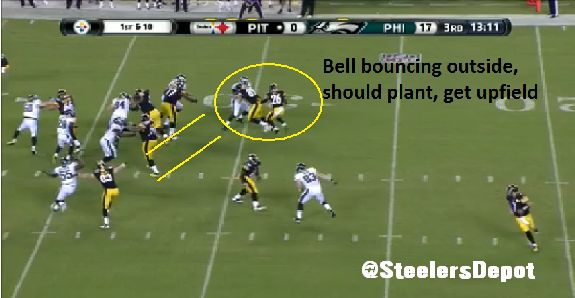 As a result, it’s only a gain of three.

– On this Ben Roethlisberger sack, Maurkice Pouncey fails to stay on his feet as he provides help to Ramon Foster. Have to stay on your feet. Otherwise, you’re blocking with four. Had Pouncey been upright, it seems unlikely the lineman would have been able to get to Ben. 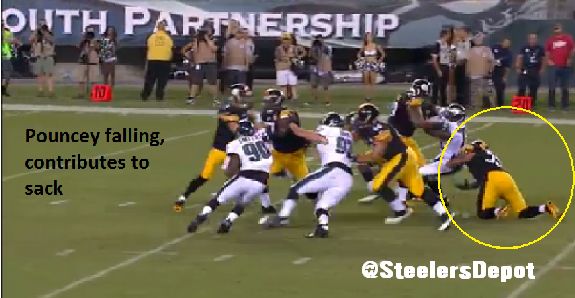 – Draw. Where is the edge protector? Jarvis Jones slants inside. Lawrence Timmons isn’t in position and ends up being cut. No one to seal the edge and force the flow inside. Another nice gainer in the run game. 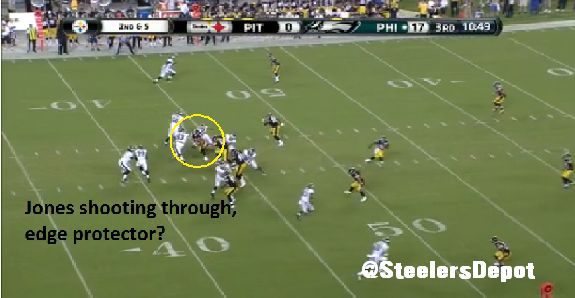 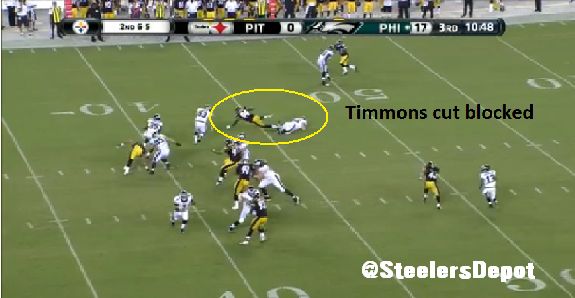 – More run defense woes. Jason Worilds slants and Lawrence Timmons has the edge. Ryan Shazier needs to fill the “B” gap. Can’t work off the block. Run goes for 15.

It’s another big run allowed with the team shifting an ILB off the edge. Have yet to see it be very effective. 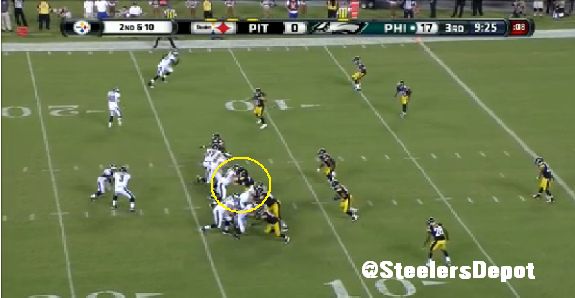 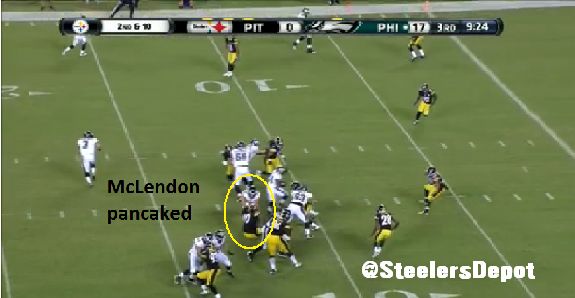 – Just the threat of the QB keeping it is enough to make Troy Polamalu respect it, letting the RB dive through the hole free. Jarvis Jones is sealed and it’s an easy six for the Eagles. 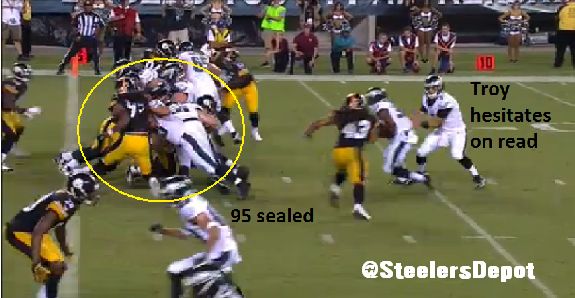 – Antonio Brown lined up in the slot against rookie linebacker Marcus Smith. BIG mismatch. Runs a wheel and Ben hits him for a solid gain.

– LeGarrette Blount had nice blitz pickup on the touchdown to Heath Miller. Roethlisberger also continued to show the ability to climb the pocket, still the most underrated part of his game.

– The Steelers don’t remove an OLB from the core of the front against this 2×2 look. Instead, Shazier covers and drops. Much more effective. Lets your edge rushers do just that. 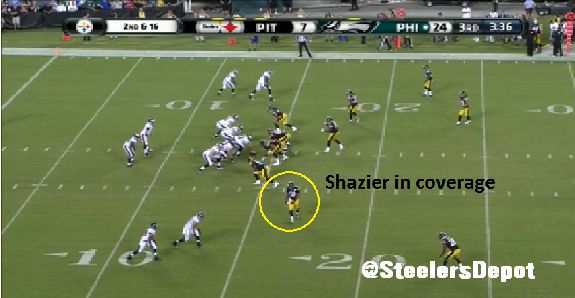 – Lawrence Timmons winning as the low man on the goalline. Records the stuff. 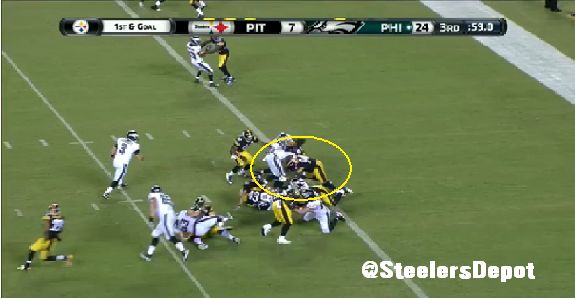 – Rob Blanchflower and Michael Palmer entered in two tight end sets. Blanchflower was the lone TE in 11 personnel. Possibly the team really trying to get a long look at a now hopefully healthy Blanchflower. David Paulson played just one snap on offense while Palmer received only four.

– 3rd and 12, early in the 4th. Markus Wheaton in the slot. Martavis Bryant and Darrius Heyward-Bey on the outside.

– Missed stunt between Whimper and Bell. The WILL slants and the MIKE loops, the latter never being picked up. If it’s BoB (back on backer) protection, Bell needs to stay in the backfield longer to ensure he doesn’t leave before the blitz. Ends up leaking out on his route. Honestly, that shows some laziness to me. Head isn’t in the game. Going through the motions. And very rarely do I accuse someone of being lazy. 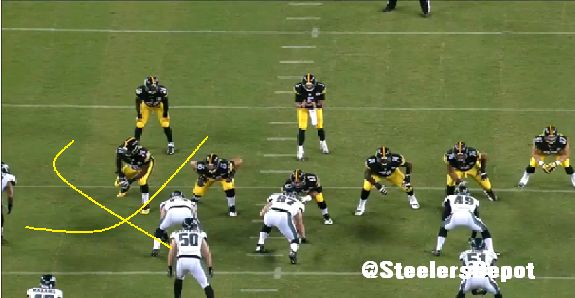 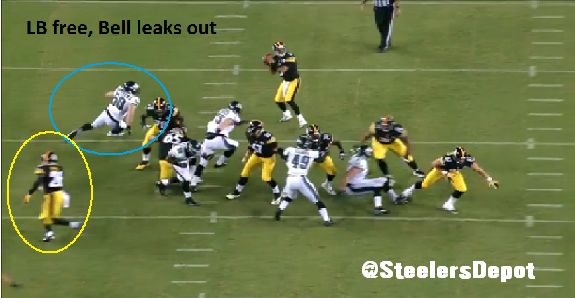 – 2nd team defense which played predominantly in the nickel. Daniel McCullers and Josh Mauro as the ends, Arthur Moats and Chris Carter at OLB, Terence Garvin and Vince Williams at ILB, Antwon Blake and Isaiah Green on the outside at corner with Brice McCain in the slot (McCain played RCB in base sets) and Shamarko Thomas and Robert Golden as your second-team safeties.

– Eagles’ 70 yard TD that was called back. Student body left. Left guard, center, and right guard pull. One of the tight ends (82) hooks and seals Carter and there’s cut blocks on Shark and Williams. Again, don’t see the presence of an edge defender.

Robert Golden misses the tackle, turning a 15 yard gain in a 70 yard score.

– Daniel McCullers didn’t have an encouraging day but he did chase down Kenjon Barner from behind on a 16 yard run early in the 4th. Big guy rallying to the ball. Still love to see that.

– Carter again hooked on this screen. Creates an open alley. 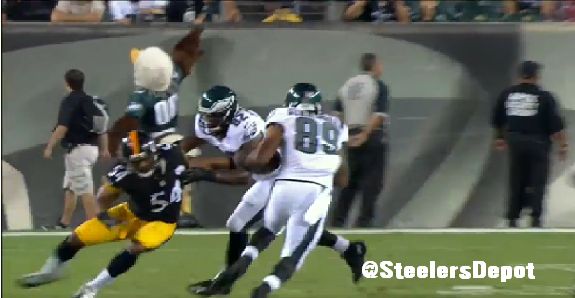 – Eagles try to run G-Lead but Terence Garvin is left unblocked and shoots into the backfield. Must be quicker though and he can’t make the tackle. Should have been a loss but it goes for a gain of three. Very disappointing.

Another ugly play by 57. This time, in confined space. No gap integrity. Leaves his run fill to chase the back, who cuts back and runs through the lane vacated by the linebacker. Garvin is sealed and taken out of the play. Six yard gain. Ugh. 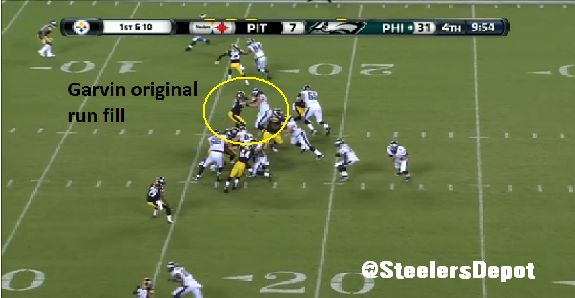 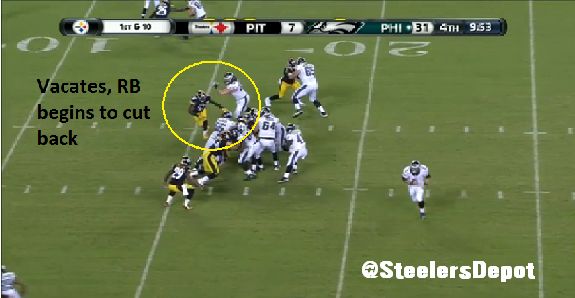 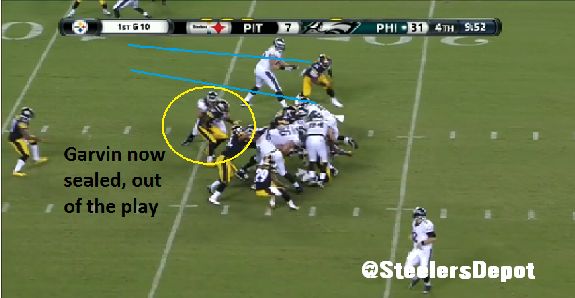 – Kudos to Heyward-Bey on his touchdown but keep in mind it came against a UDFA CB. So some perspective is needed.

– Ethan Hemer got some nickel work at RE.

– Looks like Stephen Houston strayed a little too far in pass protection. Can afford to sit and wait, letting the rush come to him. Would have been able to give help to Chris Hubbard who allowed pressure up the middle. 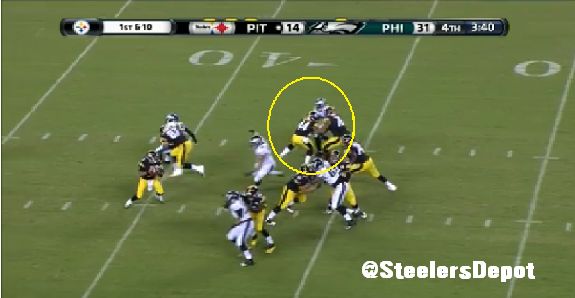 – Fades are lazy. Steelers score on a rub route after back-to-back failed jump balls. Slant to Bryant with the No. 3 stemming vertical. Creates a rub and the cornerback has no chance to make a play on the ball. 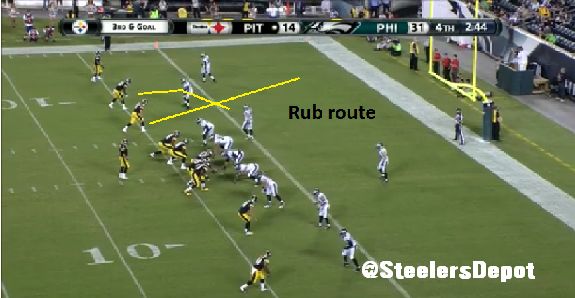 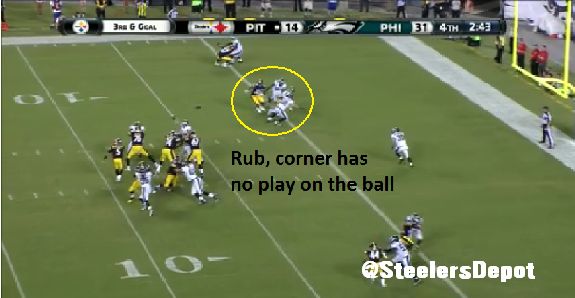 – As a whole, the issues with the run defense came down to two central issues.

1. Losing the point of attack
2. Lot of one-gapping

The Steelers were clearly out-muscled and routinely blown back off the line. You’ve seen it in the pictures and GIFs above.

The other issue, just as peculiar, is all the slanting the team did. Caused a lot of bodies to get sealed and pushed down the line. Less two-gapping with letting the play come to them, work off the block, and ake the tackle. Once you get sealed, there’s no fighting back. Battle over.

– Not really worth it to go through his position. Very little of it is good. Couple of notes though.

– Josh Harris may actually be the individual angriest at Blount or Bell. Because they were left in the game as an informal “punishment,” Harris didn’t see a snap on offense.

– Still have zero idea who is the front runner to be the #3 TE. I don’t think the team knows either. You can make a case – albeit a flimsy one – for Palmer, Paulson, and Blanchflower. Palmer for the special teams value shown in this game, Paulson for the plays he’s made in camp, and Blanchflower for his draft scholarship.

– Maurkice Pouncey is partially to blame on the sack but he had a nice game. Did a great job of working to the second level and sticking in space.

– Kelvin Beachum has had his hands full the last two weeks. I don’t hold too much concern with him but out of the starting five, he’s the one I’m worrying most about.

– Can Darrius Heyward-Bey make this team? He continues to build the case for it. Derek Moye seems out of the picture for the 53, running behind DHB in consecutive weeks.

– Not a shock but don’t think you can say anyone along the defensive line played well.

– Jarvis Jones is doing a better job of avoiding using speed rushes as a crutch. Helping to avoid getting pushed up the arc. But I haven’t seen the violent punch I saw early in camp and his hand fighting has been poor. Still not winning many battles and I have yet to see any reason to believe his flexibility has improved.

– Not going to knee-jerk the other direction on Shazier. Let’s see how he responds. But worried teams are going to throw a lot of concepts at him and he’ll be slow to process, like any rookie would.