The Pittsburgh Steelers lost their preseason opener Saturday night to the New York Giants, but not only did they give us glimpse of how they intend on using rookie running back Dri Archer this season early on in the contest, they also gave the Cleveland Browns something they will need to prepare for in the season opener at Heinz Field..

On 1st and 10 from their own 40-yard-line, the Steelers roll out a 12 personnel grouping that includes both Archer and fellow running back Le’Veon Bell. Archer is lined up in the slot on the weak side while Bell is in the slot on the strong side.

At the snap, quarterback Ben Roethlisberger looks right before throwing a little slip screen to Archer on the left. Center Maurkice Pouncey manages to slow down the Giants defensive back just enough out in space to give Archer enough room to do what he does best. The rookie shows off his great vision and top end speed.

There are two other things, however, that I would like to note in this play.

First, left tackle Kelvin Beachum does an excellent job of giving Roethlisberger a clear throwing lane to Archer as he knocks down the hands of Giants defensive end Jason Pierre-Paul. 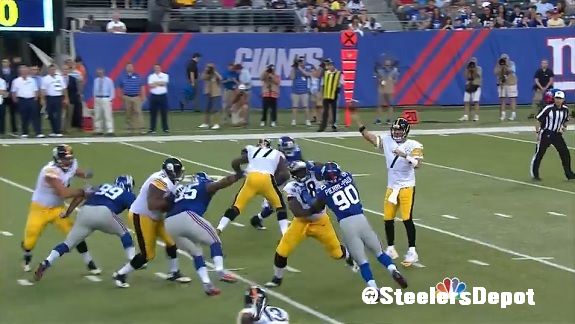 Second, Bell has the presence of mind to turn around and block the Giants defensive back that’s attempting to get back into the play. 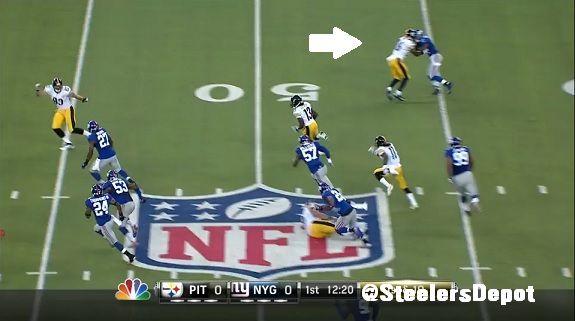 This play was pretty simplistic and while most of the credit goes to Archer, there was also solid execution by rest of the offense in addition.

I doubt that Steelers offensive coordinator Todd Haley will show us a ton of wrinkles that include Archer during the rest of the preseason, but this one play shows how explosive the Kent State product can be if he can get the ball out in space.