Breaking down the play of Pittsburgh Steelers rookie inside linebacker Ryan Shazier against the Buffalo Bills.

1. 3rd and 2, 13:41 1at. Reading his pass key (high hat), he drops into zone coverage. Like the explosion here. As you can see in this still, driving on the ball before it’s even halfway to Scott Chandler. 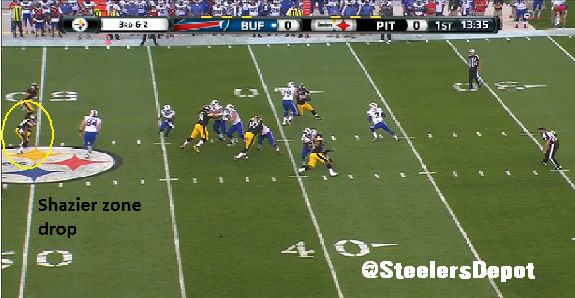 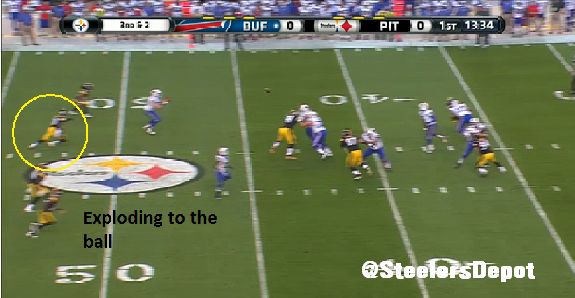 After the catch, he brings his arms up for the tackle, drives through, and makes an immediate stop. Still goes for a first down but this is the definition of “tackling the catch.” 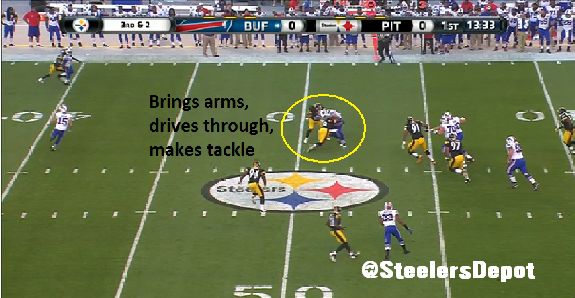 2. 2nd and 2, 12:34 1st. This time, it’s in the run game. Works off this combination block from Doug Legursky. Keeps his feet moving and he extends him arms and sheds. Other minor detail. Little hard to tell in a stillshot but look at his toes. Pointed to where he wants to run. Have to have lower and upper body working together. On this play, they’re in-sync. 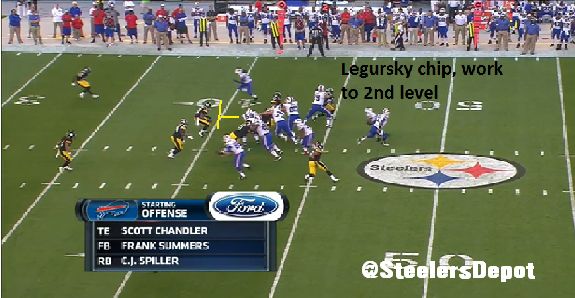 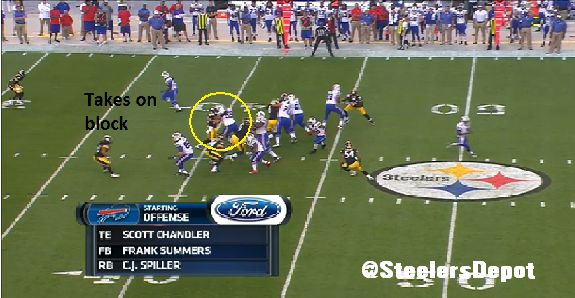 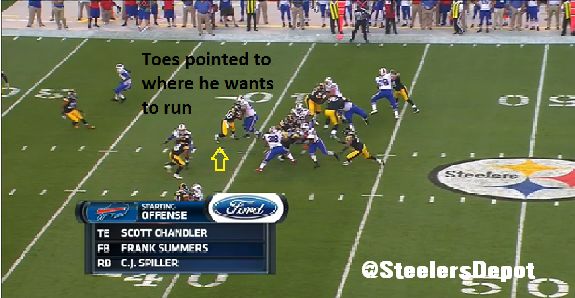 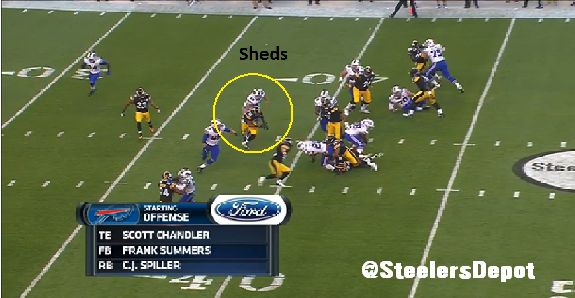 3. 1st and 10, 8:43 1st. Starts to run at an angle off the ball, probably ready to fill the “C” gap on a stretch run. As he sees the power, inside run, he gets his feet and hips underneath him and is square to the ball. 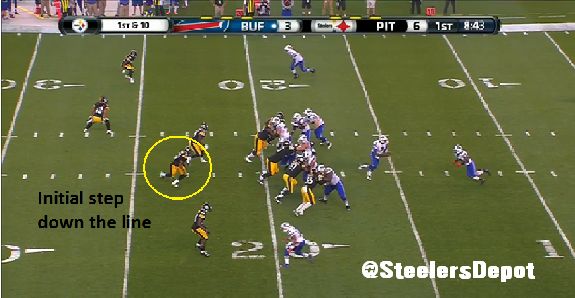 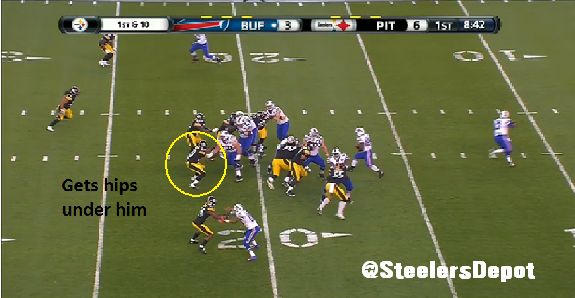 Nice hand fighting of Kraig Urbik to shed and then puts his nose in the pile to chip in on the tackle. 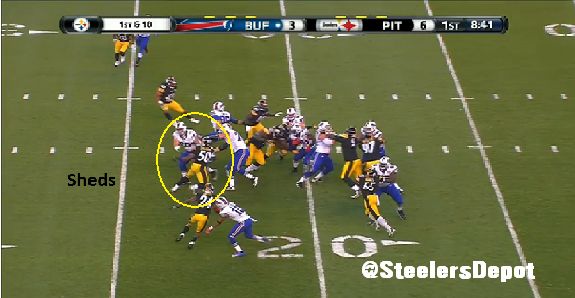 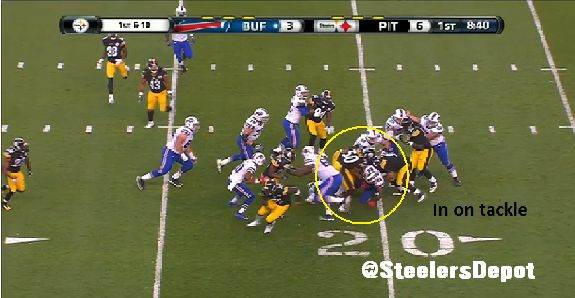 4. 2nd and 15, 6:08 1st. His interception that I’ve already partly broken down. Trail position, play to the inside hip of the tight end. Shazier gets his head around before EJ Manuel even releases the pass. Gets to watch the ball the whole way. The tight end didn’t take the rookie to the ball. Shazier’s own eyes did. That is actual, tangible ball skills. See ball, get ball. 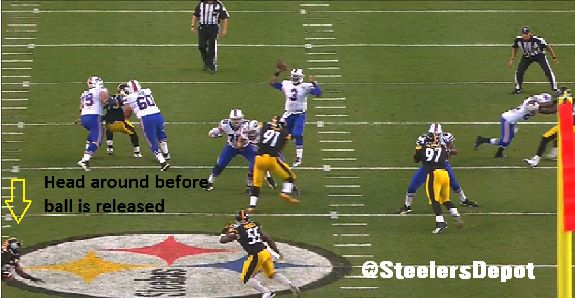 And then a nice job to high point the ball and pluck it away. 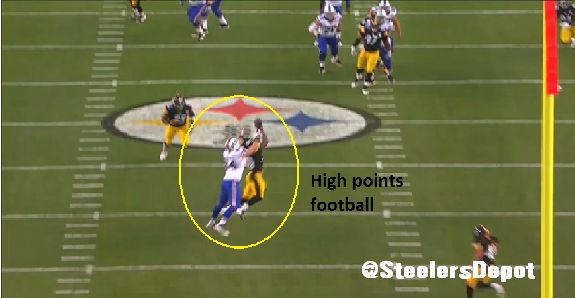 I had written way back in my scouting report of Shaizer that I was just as impressed by his football IQ as I was his speed. He can play in control, read the play, then explode. And that’s what we see here. The conversion from mental to physical.

Starts slow off the ball, reading the flow to the right. Have to protect the back “A” gap, too. For a team that will zone block, protecting yourself against cutbacks are a must.

Once he sees the RB’s decision – and it’s a power, Lead Strong run – he explodes to the hole and sideswipes the back for the tackle.

6. 1st and 10, 9:18 2nd. Also pointed out in my game breakdown. Just love the motor and chase down by Shazier from the backside. Get to see the sideline-to-sideline speed we all knew he had.

7. 2nd and 5, 6:58 2nd. Back to Shazier working in confined spaces. Works off this trap block by Legursky to make the tackle on the back. Correct technique, attack with the inside shoulder, leave your outside arm free, and then envelops the back and takes him to the ground. 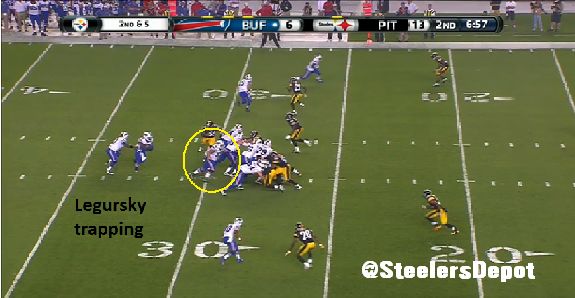 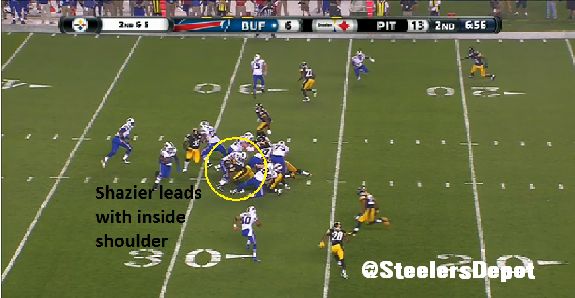 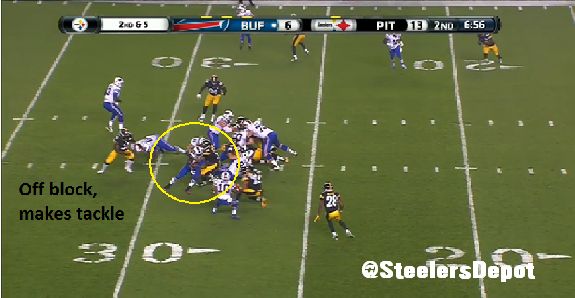 1. 1st and 10, 13:05 1st. Fullback dive to Frank Summers. Shazier starts to see the back look to bounce the run one gap over. Reacting to that, he turns and starts to run down the line. That’s the issue. Fails to stay square to the line and he’s an easy target to be sealed by one of the lineman working to the next level. Ends up being washed. 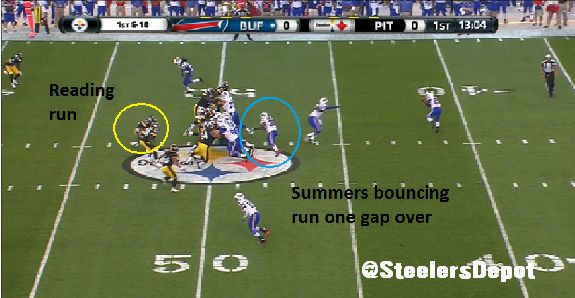 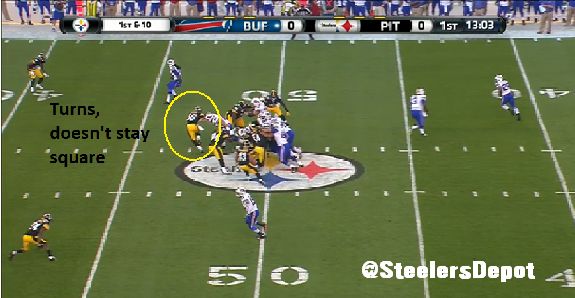 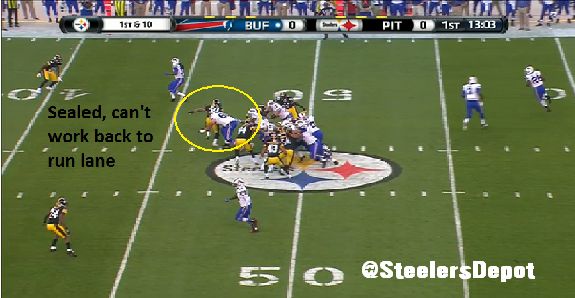 Instead of turning to run, stay square and strafe down the line. Lets you use your hands and have a better sight line on the runner. Can’t make it easy for NFL lineman to seal you. They will.

2. 2nd and 5, 10:20 1st. Screen. Shaizer a little too aggressive here with a pretty harsh angle. Once the runner cuts back, Shazier is out of the play, easily pushed down the line by an OL. With Chris Carter dropping into coverage, Shazier doesn’t need to protect the edge like that. 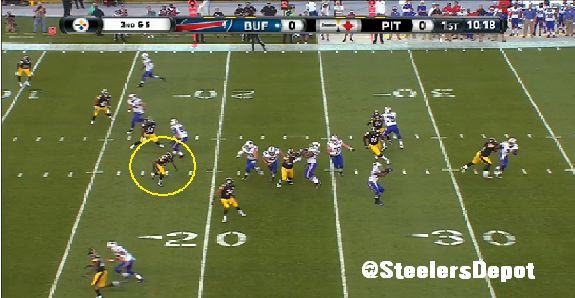 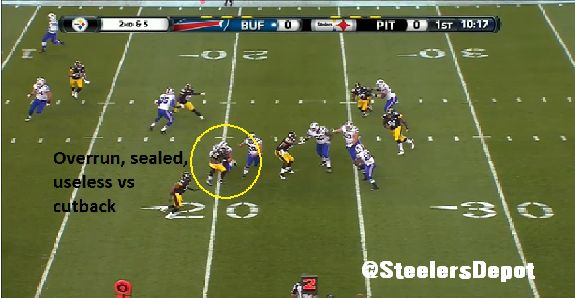 Just learning the speed of the game is the issue here. Nothing that should be too surprising or concerning. In college, Shazier was probably able to immediately close on those screens. Not in the NFL. Lesson learned.

3. 2nd and 6, 15:00 2nd. Shazier had his way with average/below-average starters like Urbik and Legursky but the talented Eric Wood works to him and drives him out of this play. Shazier is stuck and ends up having his back turned to the ball. Non-factor on this run. Body was never in position to see the ball and work off the block. 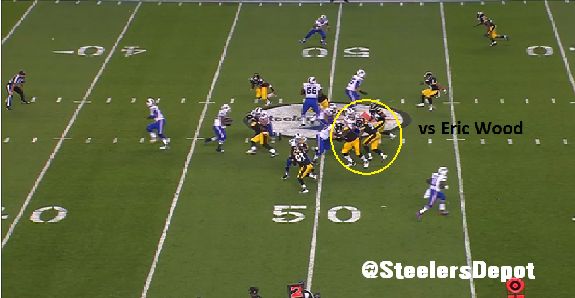 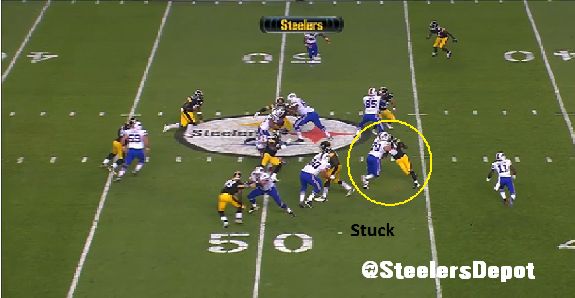 4. 3rd and 27, 14:14 2nd. Scott Chandler’s 24 yard reception which Shazier already admitted was poor technique. Considering the down and distance, it’s fine to play softer coverage. Let them have the 10 yard out route, tackle the ball, and force the punt. Shazier a little too aggressive, taking too flat of an angle, and is out of position when Chandler turns to the inside. Bills wind up getting a field goal out of it. 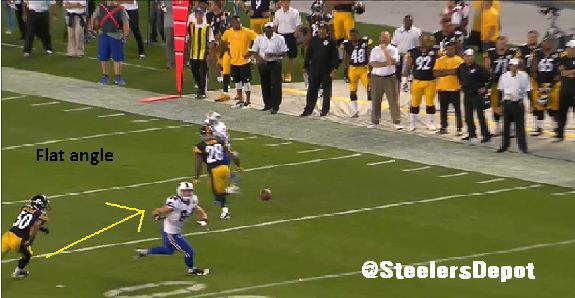 You don’t need me to break the news but it was a great first step for Shazier. You saw the speed, the motor, and the ability to shed blocks in tight quarters. Tack on two tackles on consecutive kick coverages and you’d be hard-pressed to draw up a better first start.

Some of the aggressiveness is to be expected. First game, adrenaline pumping, all while adjusting to the speed of the game. As I wrote, minor mistakes he’ll certainly learn from. Just needs to make sure he stays square so he can work off his blocks.