With Thursday being the Pittsburgh Steelers dress rehearsal, the defense became more complex than usual. Factor in a Philadelphia Eagles exotic offense and it forced the Steelers to show a lot of new or rare looks. We’ll break down some of these below. Things to file away for during the year.

1. 1st and 10, 9:19 1st. Eagles are in a 2×2 look, two receivers stacked to each side. The Steelers are in their base 3-4. Troy Polamalu is rolled up close to the line of scrimmage at the bottom. Ike is five yards behind.

Although initially confused of where to line up, Ryan Shazier is removed from the core of the formation to provide help at the top. Allows the linebackers to still set the edge or rush the QB. 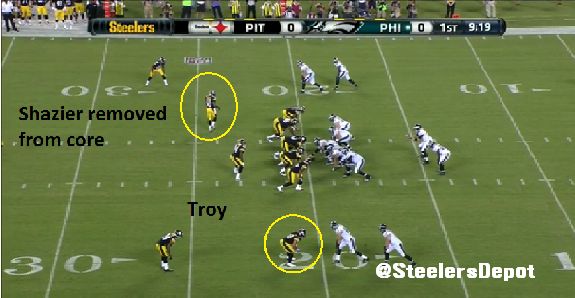 Eagles run a zone read, Nick Foles on the keep. Steelers scrape – as I pointed out in my game breakdown – and the run goes for no gain.

2. 1st and 10, 7:14 1st. Just a small wrinkle here. Steelers trying to find ways to stay in their base against 11 personnel. Man-free with Troy Polamalu rolled into the slot. 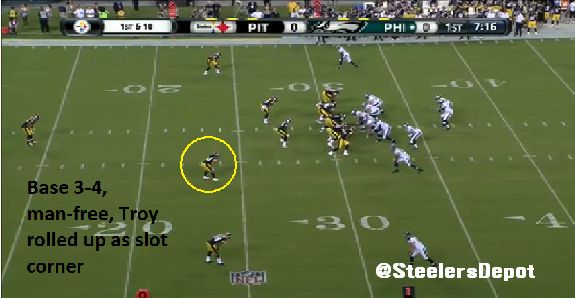 Pass is incomplete into the right flat.

3. 3rd and 10, 6:20 1st. Jarvis Jones lined up at inside linebacker. Jason Worilds and Lawrence Timmons as the outside linebackers. 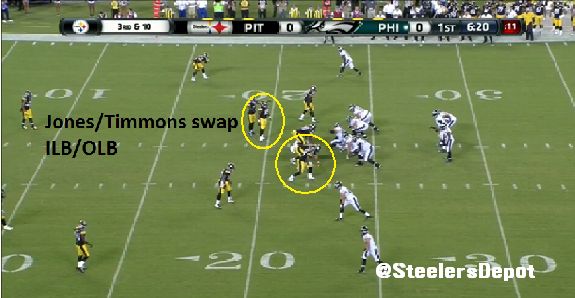 Unfortunately, this is the touchdown screen to Lesean McCoy. 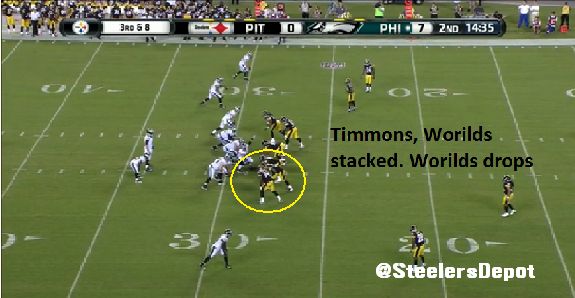 Timmons comes off the edge while Worilds drops on a “hug” blitz, covering the back as he releases into the flat. 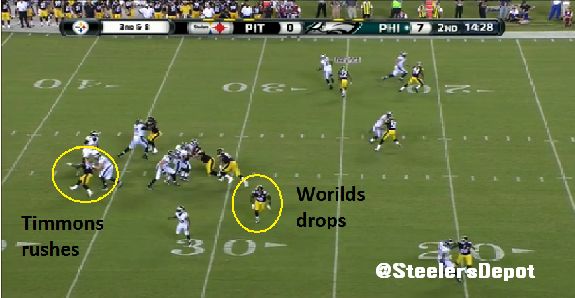 Pass is complete to Zach Ertz for a 12 yard completion.

5. 1st and 10, 2:32 2nd. Nickel vs 21 personnel, the TE lined up in the slot. Again, remove Shazier from the core of the formation. William Gay moves into the box as a hybrid linebacker to replace Shazier. 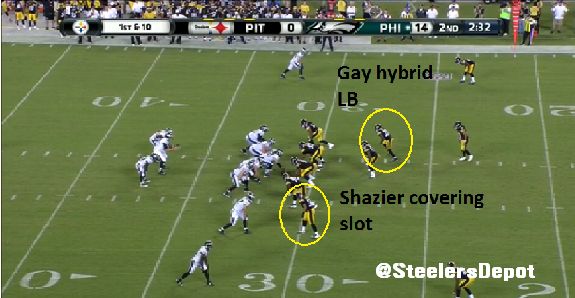 Play results in a nine yard pickup to Jeremy Maclin.

6. 2nd and 10, 1:25 2nd. Lot going on here. Jarvis Jones and Lawrence stacked at LOLB. Lawrence Timmons shifts from the Buck to ROLB. Stephon Tuitt lines up as the zero tech and Cam Heyward appears to be the four, an “under” shift due to the linebackers stacking. William Gay again moves into the box. 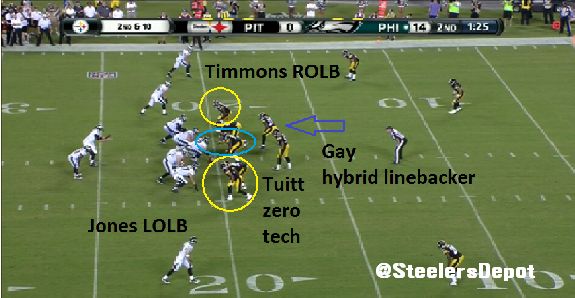 Pass on the play falls incomplete.

7. 3rd and 10, 1:20 2nd. The next play. Now Lawrence Timmons is stacked with Jason Worilds at LOLB. Same under front but with Cam Thomas replacing Stephon Tuitt.

Troy Polamalu appears to be playing “Robber” coverage with William Gay really taking on more of a free safety role. 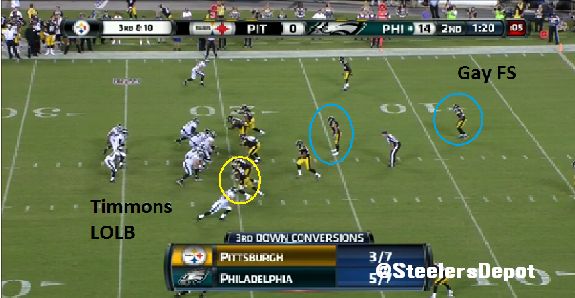 8. 3rd and 4, 2:58 3rd. Most of the examples are plucked from the first half. Took the first one I saw but some of these variations were repeated in the second half. And once the Steelers’ second-team came in, things became more vanilla.

Jarvis Jones and Jason Worilds acting as the LOLBs. Ike Taylor lines up in the slot and rushes on a cat blitz. Troy Polamalu rolls over to be the mock right cornerback. 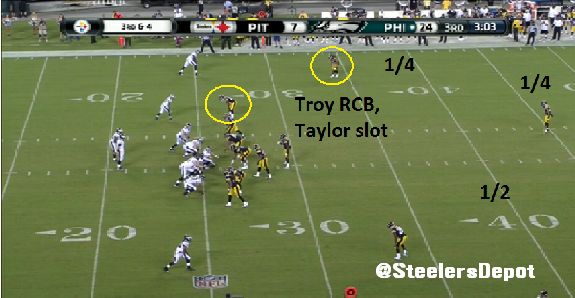 Ike Taylor gets a free lane to the QB but Mark Sanchez fires a dime to Trey Burton down the seam.

9. 1st and 10, 11:47 4th. Eagles in a 3×1 look. Steelers counter by moving all three corners to that side. Antwon Blake is still the LCB but Brice McCain and Isaiah Green are in the slot. Shamarko Thomas acts as the right cornerback. 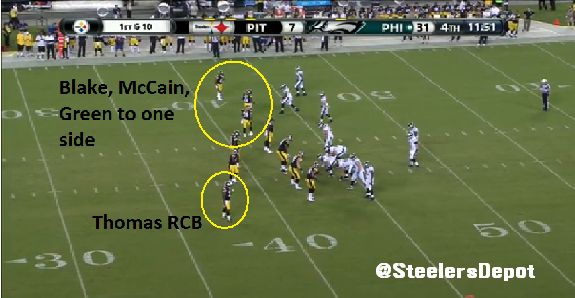 Eagles know what they’re doing though, running student body left. It results in Kenjon Barner being able to hit the edge and rack up 16 yards.