With training camp just hours away from beginning and games soon to follow, there will be hours of film to pour over, picking out concepts and explaining why they did or didn’t work. As a preview, we’ll pick apart three concepts from each side of the ball that could be used most often, or be most effective, in 2014. Some are newer while others are already staples of the Pittsburgh Steelers.

For this article, three defensive concepts to keep a close eye on this year.

The Steelers are a predominantly a zone, off coverage team, but showed the ability to switch schemes and run a more physical, man coverage defense. It often came on third and long but in this example, it’s run on 1st and 10 versus the Buffalo Bills.

The coverage fools rookie quarterback E.J. Manuel. Pre-snap, the defense shows a single high look, suggesting Cover 3. The curl at the top of the screen, where Manuel wants to go with the ball, seems to be available. In Cover 3, cornerbacks must protect the deep third against anything vertical, allowing underneath routes. 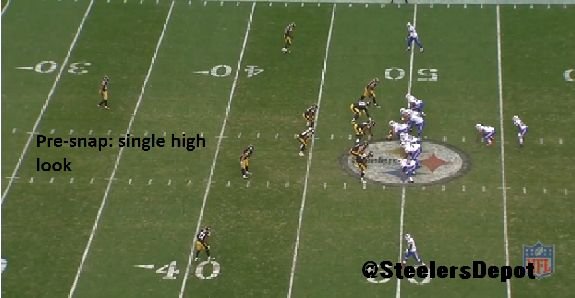 But on the snap, the Steelers’ rotate to a two deep shell. That’s the luxury Troy Polamalu gives the team. He possesses the unique athleticism to cover the deep half despite lining up within ten yards of the line of scrimmage. 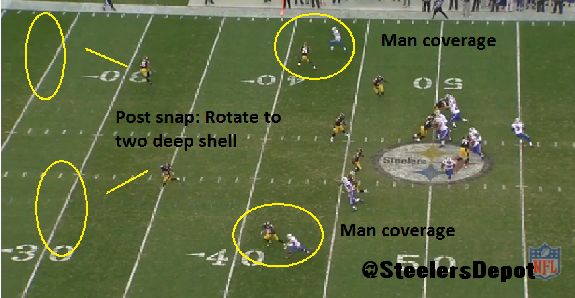 With help over the top, Ike Taylor doesn’t have to turn and run the same way he would as if he was on an island. He can read Stevie Johnson’s route, watch him chop his feet, and drive on the ball. Once he sees Johnson turn back to the quarterback on the curl, Ike knows where the ball is going. 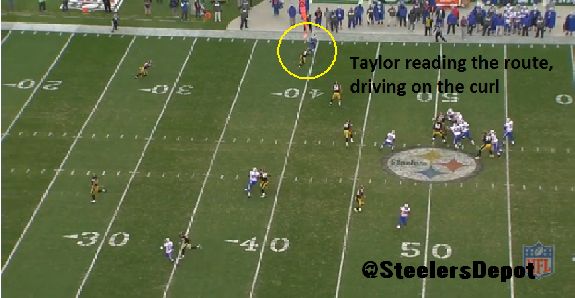 The potential interception is disappointingly dropped, but Steelers’ fans have long accepted the fact Taylor has two frying pans for hands.

Keep in mind that cornerbacks will play a “trail” technique versus anything vertical. Play to the inside hip and protect against any inside breaking routes (i.e. dig). The help over the top lets them worry less about fly and post routes. 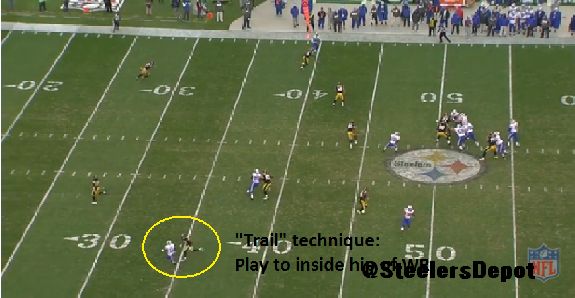 Cover 2 man is a “go to” coverage on those aforementioned third and longs. Tightens up the window for quarterbacks that are used to throwing against the Steelers’ normally passive coverage. And for a rookie like Manuel? He’ll go back to the huddle with his head spinning.

Again, focusing on the cornerbacks. The trouble I alluded to earlier with playing soft zone is the tendency to allow offenses to nickel and dime you down the field. Throw the smoke screen, the shallow crosser, the curl. All those short to intermediate routes that can infuriate fans.

The reason for that has already been stated. The cornerbacks are protecting against anything vertical. Avoid the splash plays. Keep everything in front and tackle the catch. That’s what LeBeau teaches.

But there are situations where you want the corner to close quicker on the ball. We’re talking about third and medium, 4-7, where offenses are happy to throw the curl and move the sticks.

Instead of having the cornerback immediately backpedal off the snap, he makes a “flat foot” read. He doesn’t start into his backpedal, using the 7-8 yard cushion he has because of his coverage to buy time. He reads the receivers “three step” routes, those short routes mentioned above that come off of a QB’s three step drop. If the corner sees the receiver chop and break, he’ll drive on the route and attempt to make a play.

Perfect example of this on 3rd and 3 against the Green Bay Packers. Based on the down and distance, it’s safe to assume the Packers’ West Coast offense is going to get the ball out quick.

Cortez Allen, the left corner at the bottom screen, doesn’t start into his pedal off the ball. He sits down – the flat foot read – and watches Jarrett Boykin’s route. As Boykin, running a simple flat route, turns back to the QB, Allen drives on the ball. 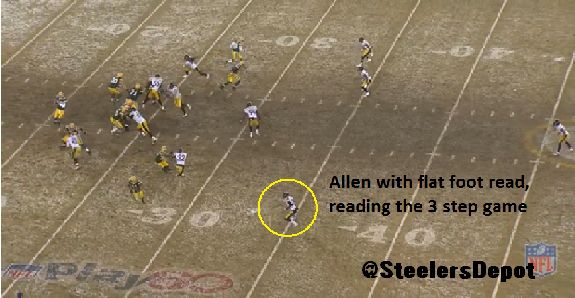 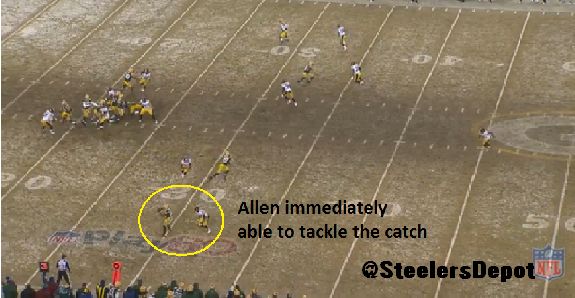 Boykin does make the grab and converts the first down, but Allen is able to prevent any YAC. But if the pass is off target or the receiver body catches the pass, Allen is going to have a great opportunity to play the pocket and break the pass up. Avoiding his pedal and having to make up that ground saves precious moments.

I bring this idea up because earlier in the game, when Allen was asked to pedal, he was late getting to the ball and the receiver racked up YAC. Allen does slightly slip as well, but if he didn’t have to pedal, he’s likely to make the play.

Of course, I recognize this can only be used in certain situations and based on an opponent’s tendencies in film study. Play flat-footed long enough and you’re bound to get burned over the top. The Steelers’ don’t exactly have shutdown corners who can get away with gambling either, although my hopes for Allen remain high.

But it’s a play that can be sprinkled in when your defense needs to get off the field. And maybe it’ll turn into one or two more interceptions.

These are the types of plays that make offenses fear Dick LeBeau. With Ryan Shazier’s explosiveness, the Fire X should make a triumphant return after its seldom use used in 2013 due to the team being forced to play more subpackage.

Early in the contest against the New England Patriots, Vince Williams “sugars” (lines up over) the weakside “A” gap. On the snap, Steve McLendon moves down one gap to occupy the right guard’s attention. With Williams blitzing, the center slides to pick him up. Brett Keisel slants a gap to the outside to hold the left tackle. 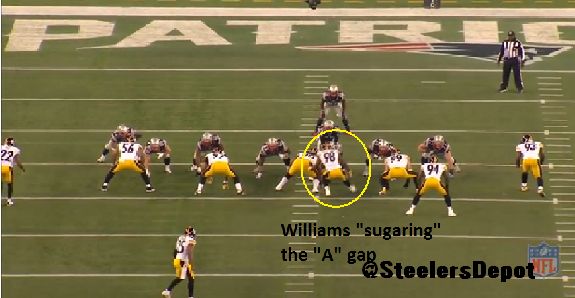 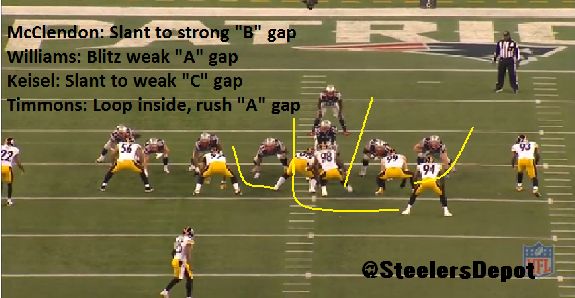 This is all done to free up Lawrence Timmons, blitzing the “A” gap between center and right guard. The Red Sea parts leaving Timmons to have the cleanest shot on Tom Brady you could hope for. Brady is forced to throw the ball well before he wants to. the pass harmlessly falling incomplete. 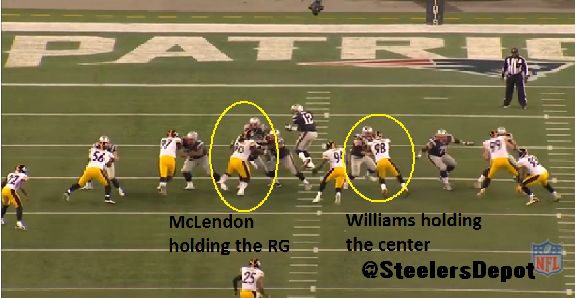 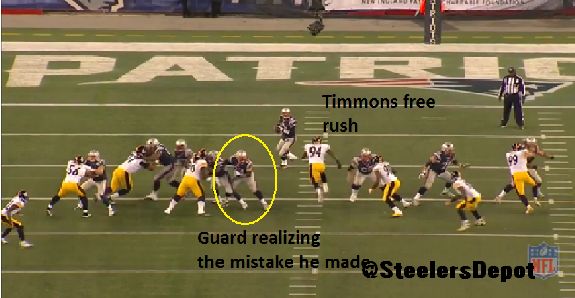 Timmons gets the added bonus of drilling Brady into the turf. A rite of passage, as far as most Steelers’ fans are concerned.

Shaizer is going to present countless opportunities to stunt and blitz him in conjunction with Timmons and the rest of the defense. His first step and speed will allow him to be moved around pre-snap meaning opposing offensive lines’ should have their hands full in 2014.