– Fantastic change of direction, maintains speed through his cuts

– Speed to win to the edge most backs don’t have

– Fluid as a route runner, gets out of his breaks in a hurry

– Goes down too easily, lacks strength to run through contact, has to make you whiff

– Weak, doesn’t have much leg drive

– Poor runner between the tackles, tends to put his head down on first contact and goes down too easily

– Questionable vision, will run too East/West, trusts speed a little too much

– Poor receiver, too many drops and a body catcher

– Third Team All-MAC as receiver and kick returner in 2013

– Missed the 2011 season due to being academically ineligible

– Injured ankle early in 2013 and missed time or was limited

– Over 1800 yards of offense senior year

You don’t need me to tell you how good of an athlete is. 4.26 40 at the Combine and a 1.46 ten yard split. Rare to see anyone post numbers of those caliber.

Dangerous in space. Put him one on one and he’s likely to win.

Plays like that show how well he could fit into the Steelers scheme. Team that loves to throw smoke screens against off coverage and bank on them making the corner miss. Archer can do that.

Rare speed and second gear to get to the edge. Also see the ability to accelerate after giving the corner a shake.

Third and ten run against Rutgers in 2012. Linebacker driving downhill and looks to have the angle on Archer, who is wearing #26 after a jersey issue early in the game that forced him to change numbers. 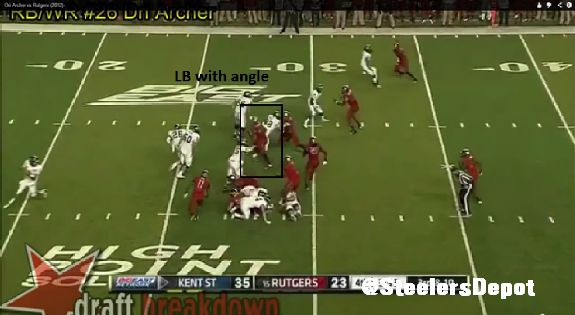 But Archer kicks in that second gear and motors past, gaining the edge, planting upfield, and picking up the first down. 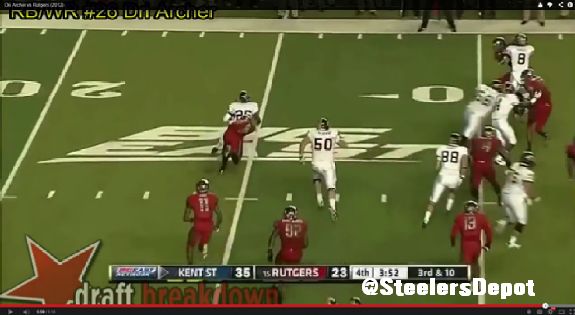 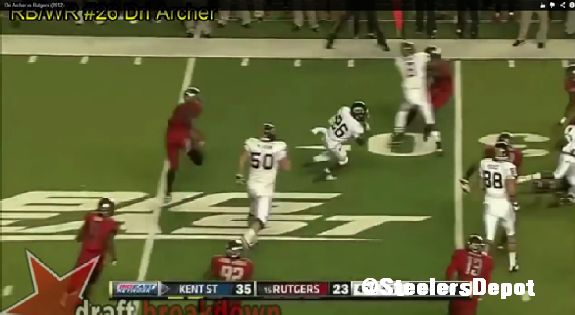 A splash play waiting to happen. Guy you get really excited about. Reason why they invented the highlight reel.

Played everywhere for Kent St. In the slot, in the backfield as a traditional back, as the Wildcat QB. Team threw swing passes to him, smoke screens, draws, option pitches, etc. Golden Flashes got really creative with him and that’s what the Steelers likely plan to do.

In the four games I watched, lined up at wide receiver 33 times. He was in the backfield another 44 times.

But he comes with his fair share of issues.

Weak runner who goes down far too easily. Arm tackles enough to bring him down.

Scared runner between the tackles. Obviously not his wheelhouse but would like to see a better effort. Chooses to put his head down in the lane and gives up on the play too quickly. 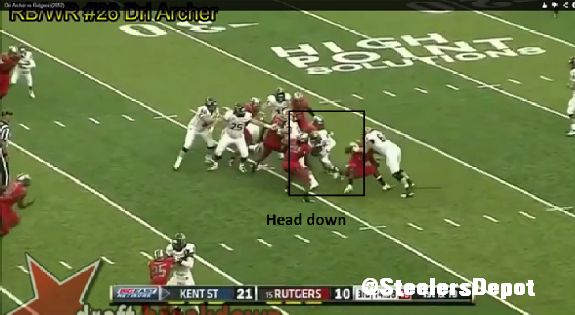 Questionable vision and loves to try and bounce plays. Thinks he can get by because of his speed. Normally worked in college because he was the unquestioned best player on the field but won’t be the case in the NFL.

Instead of cutting upfield for a modest gain, chooses to try and run down the line. Ends up getting tackled for a loss. 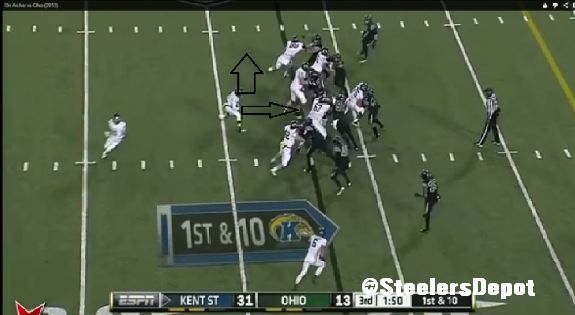 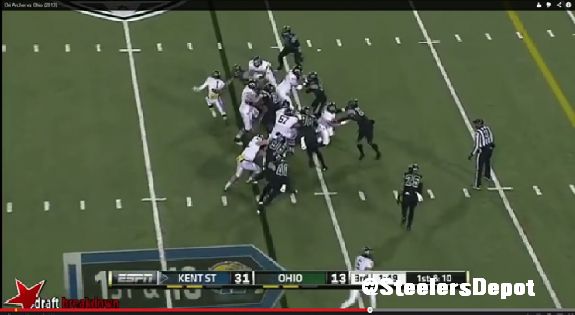 Poor hands as a receiver despite being a good route runner who can separate. Terrible drop against Ohio that would have gone for six. Not shown here but typically a body catch.

Archer is an exciting player to watch but I’m lukewarm on the selection. It has nothing to do with what happened to Chris Rainey or LaRod Stephens-Howling. Past doesn’t dictate the present.

I’m all about value and being able to contribute in multiple ways but in the third round, I’d like a player with a true, defined position. Not someone who could do a little bit of everything. Those undersized but fast players albeit not Archer fast can be had later in the draft. I’ve been talking about grabbing Roy Finch as a UDFA for a long time. Fear Archer will be the “jack of all trades, master of none” type.

Besides that, still not sold on Archer as a runner. Guy that looks to go around contact and can’t run through. Won’t have the same level of success in the NFL.

Still have to digest the selection and watch some more tape but can’t say I love the pick.

10-27-12 at Rutgers: Started game wearing #1, jersey issue forced him to wear #26. Shows second gear, can get to the edge when most backs can’t. Gifted player. COD is top notch. Great balance and can tight rope down the sideline. “Hold your breath” type of big play ability even if he didn’t break one. Did have a big 3rd and 10 run to help preserve win, showed speed to edge. 18 RB, 4 WR. Can make defenders whiff because of agility, showed it in previous games too. Used creatively, fake handoffs, options, and as a receiver. Multiple carries as a traditional runner. Poor runner inside, puts head at first sign of contact and gives up too easily. Lacks strength to move the pile. Belief in speed to get to the edge. Body caught as a WR. Two KRs. Down too easily. Can make defenders miss but when meeting them head on, not when defender is at an angle.

10-12-13 at Ball St: Svelte frame with only a tiny bit of muscle, obviously undersized. 10 snaps at WR, 4 in backfield. Multi-purpose athlete. Slot, WR, used on a couple quick hitters into the flats, smoke screens. True and wildcat RB (twice) didn’t throw. Smooth athlete who maintains speed in his cuts. Natural athlete. Speed to win to the edge. Agile, very quick-twitch. Not particularly productive, bottled up by Ball St. Lost fumble on first carry. TD catch, fluid in his breaks. Will run East/West too much. One gear? Went down too easily. Outmuscled on wheel route late in game. Jack of all trades?

11-19-13 at Ohio: Big game. 2 TDs in blowout won. 11 WR, 16 RB. Dangerous, elusive in space. As quick-twitch as they come, changes direction without losing speed. 2nd gear to get to the edge, will win one on one battles other guys just can’t. Runs around tackles, not through and displays some balance. Must be up to speed to make you miss, lacks strength to run through while not at top speed. More traditional RB, slot, one out wide in 2 WR set (smoke screen). Big play with ball in his hands. Poor receiver with ugly, wide open drop. Can separate but body catcher. Will go down too easily. Bit shy between the tackles, tends to put his head down. Can be too East/West, play out of control, able to get away with it. Will pass up open lanes to try and bounce. Head down between the tackles. Shows balance, can tightrope.