Final scouting report on the Pittsburgh Steelers’ 2014 NFL Draft class. Future articles will give my final grades for this group. But for now, a breakdown of sixth round selection and UCLA linebacker Jordan Zumwalt.

– Frame that does offer some room for growth

– Instinctive and finds the ball quickly

– Above average first step though perhaps aided by scheme

– Works to get his arms extended

– Shows some ability to hand fight and get off blocks

– Versatile, played multiple positions and has experience on special teams

– Some experience dropping into coverage

– Lanky frame without much bulk

– Speed deficient and exposed in the open field

– Had to come off on 3rd downs and subpackage football

– Will struggle to get off blocks from offensive lineman

– Lacks upper body strength and can be pushed around

– Hands must be more active

– Times where he won’t stay square, option to turn around than use his hands and shed

– Lacks any pass rushing arsenal, doesn’t offer much in that department

– At least four starts in every season, 30 in career

Zumwalt doesn’t look the part as a tall, lanky linebacker without much muscle and stubby arms. I’m guessing there was a time when opposing offensive coordinators and players thought the same. Until he gets out onto the field and does this to somebody.

That’s Zumwalt knocking Virginia Tech quarterback Logan Thomas out of the game with a head injury.

This wasn’t an isolated incident of Zumwalt playing with the adrenaline rush the final game of your career will give you. How he always plays.

Instinctive player who finds and rallies to the runner in a hurry. Good explosiveness he possesses helps him here, too.

Weakside linebacker in the below clip. First step to beat the tackle inside and work across the formation to make the tackle.

Moved around at UCLA. Played the majority of time as the MIKE linebacker but was put on the edge and some snaps as the WILL. Also played on the last line on kick returns where David Paulson and Michael Palmer spent time this season for the Steelers. 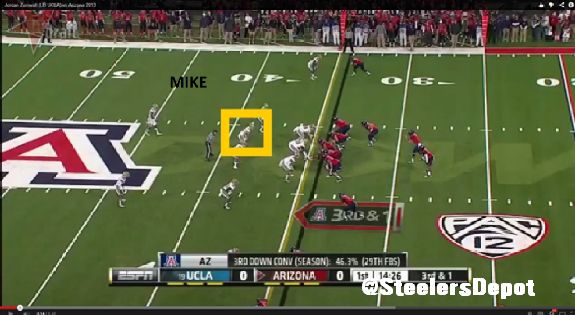 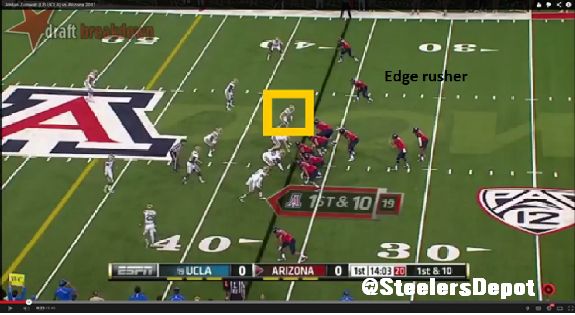 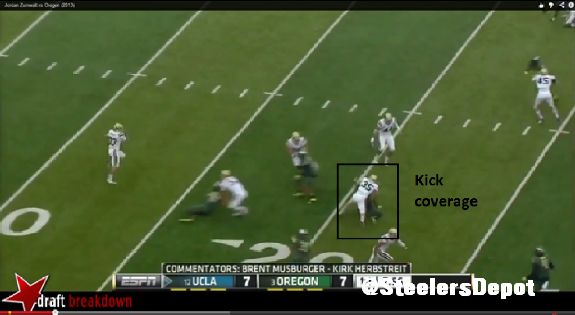 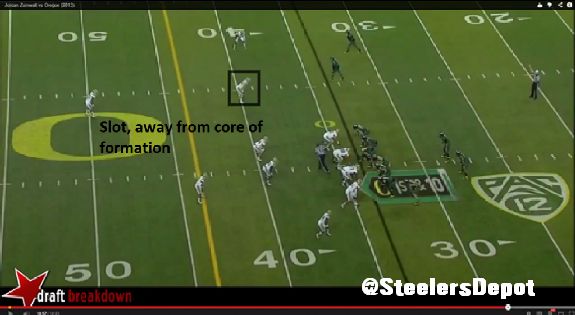 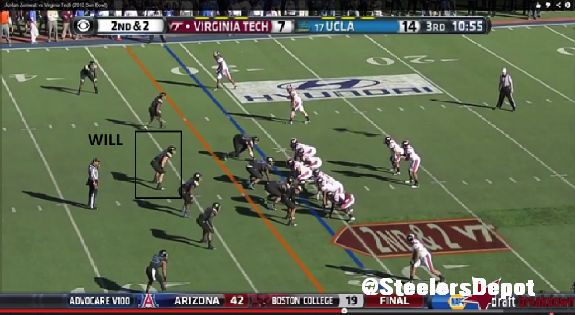 There’s an obvious size and strength deficiency with Zumwalt. On the light side at 235 for a 6’4 frame. Juxtaposed with short arms and tiny hands. Not the first undersized Zumwalt to play football. His father was a 214 pound defensive end at Arizona State.

Does make an effort to get his arms extended and there are moments where he can stack and shed but don’t see it often enough. Can get run off the ball.

My biggest issue with Zumwalt is that he’s slow. Below average athlete in the open field. Even with the angle in the clip below, Oregon’s Marcus Mariota still outruns him.

Even though he can see Logan Thomas taking off, he’s slow to flip his hips and run to him. Thomas flies past.

Both those quarterbacks are athletes but that’s the type of speed he’s going to see on Sundays. It’s a major red flag.

When I watched him against Stanford and the clip was dedicated to Yankey and not Zumwalt, it became obvious that he was getting pulled off the field on third downs and subpackages. He was also playing with Anthony Barr and Myles Jack, two of the most athletic players in the conference, but still speaks to his lack of athleticism.

Truthfully, he was not especially productive in school. Just 22.5 tackles for loss over four years and 50 career appearances. Only 4.5 sacks, three of which came during his freshman season. Just three interceptions and one forced fumble.

Granted, some of his big plays – like the knockout blows – won’t show up on the stat sheet but you’d still like to see someone be a little more dominant with more collegiate accolades. Only made the all-conference team once in his career. That was in 2013 as an honorable mention.

He’s played edge rusher but lacks any pass rushing moves and his home is most certainly at inside linebacker. Not outside.

UCLA let Zumwalt shoot gaps and run blitz a ton. Made him look quicker than he probably actually is. Difference between Zumwalt and what I saw in Ryan Shazier. Shazier had to read the flow a lot more than just flying around and hoping for the best.

But the biggest issue comes back to his speed. That’s a deal breaker. Biggest adjustment from college to the pros. A lot of traits can be masked but speed isn’t one of them. He has the first step and short area quickness to play in the box but lacks the strength. And he doesn’t have the wheels to do well in space. So where does he fit?

The physicality and aggressiveness will endear himself to Steelers’ fans, and it does to me as well, but he doesn’t have the makings of a starter. Looking at a core special teamer at best. Could fill that role out very well but nothing much more than that.

Games Watched: at Stanford, at Oregon, at Arizona, vs Virginia Tech (Bowl)

10-19-13 at Stanford: Not the best look and a nondescript game based on available footage. Credited with nine tackles though. Does try and get his arms extended but lacks strength to always hold up at POA. Mainly an ILB, dropped into coverage three times. Good first step. Overall, short-area quickness, decent athlete. Can get stuck, needs to use his hands better. Can turn from the play and get run out. Off the field on a lot of 3rd downs/subpackages. All snaps at ILB, didn’t see one on the edge.

10-26-13 at Oregon: Strong first three quarters. Nose for the ball, always around it. Reliable tackler in the open field and can be a violent, physical tackler. Good first step and snap anticipation. Works to get his arms extended and into the OL, shows some ability to shed and best when doing so in space than a box. Big hitter. Versatile, mainly MIKE but some work as an edge rusher. Little bit of WILL, split out to slow once. Played on kick returns, back line spot Paulson/Palmer has for the Steelers. 14 tackles on the day. Did seem to tire and wear down late. Got stuck on blocks, more easily washed, played slower. Speed deficient in the open field. Just average foot speed. Will simply lacks strength to get off blocks, especially in tight quarters and get pushed around/sealed when unable to shed. Exhibits short-area quickness and some agility. Playmaker in part to scheme, let him shoot gaps/run blitz. Made him look good. Limited edge rusher, no moves, nothing inspiring. Dropped into coverage 2-3 times.

11-9-13 at Arizona: “Zum(rhymes with sum) walt.” Slight frame but height offer room to grow and ability to add weight/muscle. Currently lacks it in his arms/upper body. Lanky, Flashes a quick first step, explosive off the ball. Reliable tackler. Smart, finds the ball and rallies to it in a hurry. Versatile, played mostly strongside OLB and some snaps in the middle in a 3-3-5. Occassionally shows quick hands to shed. Speed deficient in the open field. Can shed tight ends but times where he gets stuck by OTs. Time where he’ll turn his shoulder and duck out instead of staying square to his blocks. Only dropped into coverage once. Couple of splash plays stemmed from shooting gap than true playmaking.

12-31-13 vs Virginia Tech (Bowl): Monster game, ideal way to go out. Co-MVP, 10 tackles and 1 INT. Vicious tackler, knockout blow time and time again. Throws his body weight around. Knocked out VT QB Logan Thomas for the game with a head injury. Physicality and tenacity in spades. Reliable tackler with a nose for the ball. 43 yard INT, took advantage of a poor throw. Instinctive, locates the ball and always around it. Some short-area quickness. Slow in the open field and gets exposed. Kept pretty clean and didn’t have to wade through the trash. Mostly MIKE ‘backer. Average athlete. Dropped a few times into coverage, especially late as UCLA was up by a lot.