– Plus size and looks the part

– Plays with large catch radius, gets arms extended away from his body

– Large size creates mismatches, difficult to bring down and able to drag defenders, makes them earn their tackles

– Nasty demeanor and looks to finish his blocks

– Versatile, lined up all over the offense

– Experienced and a leader

– Not a top notch athlete, won’t “wow” you or blow past any defenders

– Needs refinement as a blocker

– Doesn’t carry lower half well, leading self to get overextended and falling off his blocks

– Strength is just ok, not terrible but not great

– Medical issues, missed a lot of 2013 with injuries

– Injuries hindered conditioning, causing him to wear down late in games

– Slightly older than the typical prospect

– At least four starts, 18 catches, and one touchdown in every season

Like I pointed out in my scouting report on Shaquille Richardson, I wasn’t able to get the most complete view on Blanchflower. Only watched two full games. Attempted to watch a third against Buffalo but Blanchflower left after halftime, ostensibly due to injury. Part of that limited look is due to that – the injuries, coupled with the fact footage from a 1-11 team isn’t too common. Alabama, UMass is not. It’s a school that has only had three players drafted since the turn of the century.

While he can frustrate you, his hands and ability to pluck the football is still one of his best traits. Doesn’t body catch, getting his arms extended and increasing his catch radius. 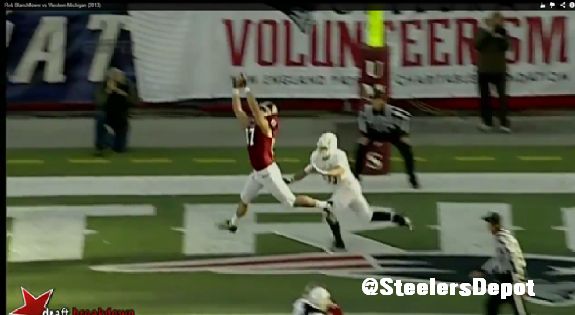 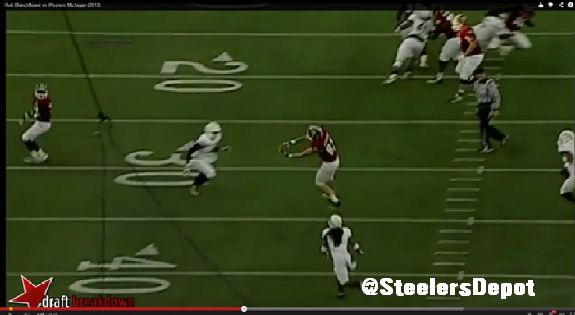 Love receivers that play bigger than their frame. And Blanchflower is already plenty big to begin with. Based off their bios, he’s already twelve pounds heavier than David Paulson.

Size is his best asset after the catch. Defenders had a tough time bringing him down and he typically had to be gang-tackled. Makes the defense earn their tackles.

Blanchflower is to the short side of the field with his hand down. Wore #87 for the Minutemen.

That’s the type of big play you want from your top weapon. Down by seven late in the fourth quarter, make that big effort play on 3rd and 3 to move the sticks.

Remember what I said about making defenders pay? Yeah, that’s what I mean.

But that doesn’t mean Blanchflower is completely devoid of speed. Sneaky athlete. Takes this middle screen, shakes the defensive lineman, and then momentarily outruns a defensive back until he runs out of gas and is brought down shy of the goalline.

Showed concentration and ability to track the ball off this deflection against Miami (OH). Walks in for a score.

Luckily, the two full games I watched were Blanchflower’s best. Seven grabs for 131 and a score against Western Michigan and five catches for 98 yards and another touchdown against Miami (OH).

Needs to be refined as a run blocker but I admire his demeanor. Doesn’t shy away from it and has a mean streak. Might not look like much but watch him run the DB out of the frame after initially putting him into the ground. Didn’t have to do that. The back had reached the edge and Blanchflower had done his job. Exhibits his tenancity. He’s to the wide side of the field, lined up off the line in a two point stance.

When you’re a team that has struggled as much as the Minutemen, 2-22 since making the leap to the FBS level, the details and little things are critical. A realization that was not lost on Blanchflower and it shows up on tape.

As you may have already noticed, UMass lined him up all over the place. Over the span of two drives against Western Michigan, Blanchflower was lined up in the backfield, off the line in a two point, as a traditional “Y” in-line tight end, and out wide. 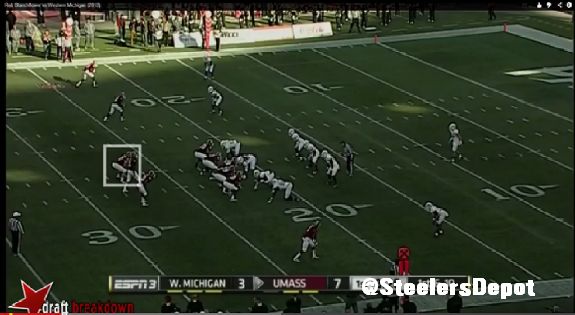 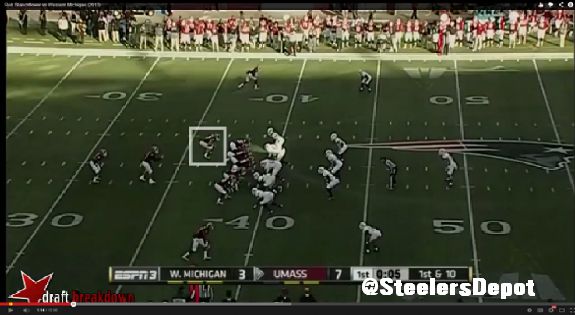 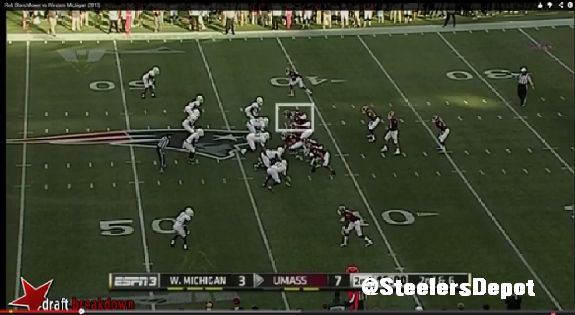 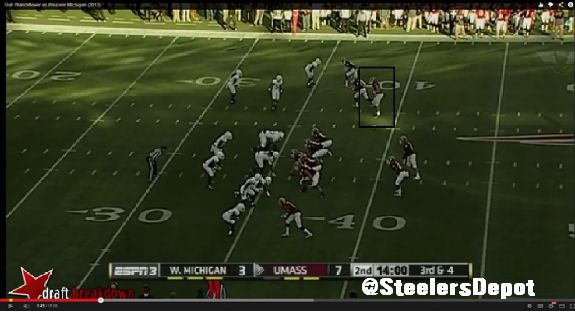 By all accounts, Blanchflower was the unquestioned leader of the team. Then head football coach Charley Molnar said that Blanchflower was voted captain of the team “in a landslide.” High character guy and haven’t seen a bad thing said about him. Guy that just wants to get a chance and go to work.

As noted, became Massachusetts’ all-time leader in receiving yards at tight end. And he did so under less than ideal conditions. In the last two seasons, UMass quarterback’s threw 37 interceptions to just 19 touchdowns and completed only 52.9% of their passes. Watching pass after pass being airmailed was frustrating for me to watch. Can only imagine how Blanchflower felt. He did well in a bad situation.

While I called him a “sneaky athlete,” by no means is he a great one. Isn’t going to run away from many guys at the next level and not elusive after the catch. Won’t make many miss and doesn’t have that short-area quickness. Doesn’t exactly lumber either. It’s somewhere in-between.

Against Miami (OH), he had three blatant drops and you could arguably charge him with another one.

Gives good effort as a run blocker and has some tools to possibly excel there but currently raw. At times, looked lost and ended up being in no-man’s land. Pulling to the wide side of the field in the clip below.

Won’t always carry his lower half, gets flatback, and loses his power and ability to seal. Must improve there. Just comes down to repetition. 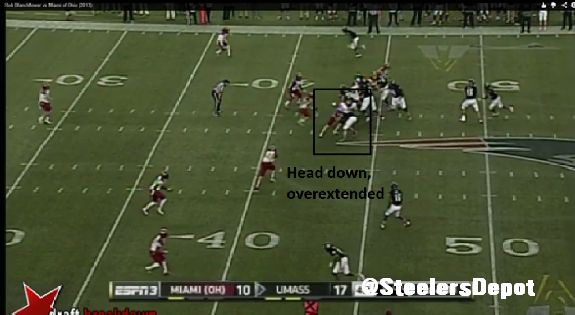 Because of the injuries, his conditioning was tested. Wore down late against the Redhawks when UMass went into their four minute offense to preserve the lead. Got pushed around and couldn’t stick to his blocks. Even got reverse pancaked. But not a talent issue. Stemmed from the medical.

Which unfortunately, is pretty extensive and undoubtedly a reason why he fell in the draft. Was unable to workout at the Combine or his Pro Day, scheduling a private workout a month later.

His senior year got off to a rocky start after missing the first three games due to two separate injuries, at least one of which was a groin tear. He failed to finish the Buffalo game and then missed the entire contest against Northern Illinois.

Underwent surgery performed by Dr. William Meyers in Philadelphia for the groin tear/hernia. Was one of the Combine medical rechecks and according to the tight end at least, was on track, although he admitted he was not fully back in “football shape.”

I didn’t evaluate many tight ends before the draft, but in a sense, I compare him to a poor man’s Jace Amaro. It’s a much better selection on virtually every front than David Paulson. Give his poor play and what I see in Blanchflower, I expect the latter to be able to snag a roster spot away come training camp. He’s good value and I’m excited to see what he can do when fully healthy.

Games Watched: vs Miami (OH), at Buffalo (Half), vs Western Michigan

10-12-13 vs Miami (OH): Big target that uses size to his advantage and tough to bring down. One nasty stiff arm against DB. Shows some fluidity in his cuts. TD catch off defensive deflection, great concentration and tracking of the football. Runs good routes. Versatile, similar assignments as he did vs W. Michigan. Some strength and shows good effort as a run blocker. Catches away from his body. Three true drops and could count a fourth. Flatback as a run blocker, gets overextended and fails to cover his lower half. Causes him to fall off his blocks. Seemed to wear down late in the game with UMass running the ball with the lead. Lost strength, could barely stick, and looked much more ineffective. By product of injury, missed time, lack of conditioning. Had poor QB play.

10-19-13 at Buffalo (Half): Only played first half, ostensibly left to due to injury. Limited look, did not catch a pass. Targeted twice, dropped a diving catch. Fluid athlete that isn’t tight. Lacks blazing speed and won’t outrun many. Just average long speed. Looked lost on one run block, let Mack in on a tackle. In-line and slot. Good effort, chasedown on Buffalo INT return.

10-26-13 vs Western Michigan: Impressive game. Positive size, fills out his frame well. Already bigger than Paulson. Reliable receiver. Soft hands and catches the ball away from his body. Large catch radius and natural plucker. Size makes him difficult to be brought down. Not particularly quick but a proper route runner who doesn’t round his cuts. Strength and can make catches that are contested. Wins vs DBs as a receiver and generally, as a blocker. Some strength and arm extension lets him get a decent push. Nasty demeanor and finishes his blocks. Very versatile. Lined up all over. Regular in-line, off LOS in two point, in the backfield, H-Back, slot. Ran the route tree – dig, seam, flat, out. Huge day. 7/131/1. Sneaky athlete but not tremendous and normally won’t “wow” you. May get overextended as a run blocker. Sometimes looks unsure of who to block, will look lost or whiff. May need some technical refinement as a blocker, staying square.