– Shows proper frame off his kickslide, gets knees bent

– Not particularly long arms but excellent job of getting them extended, keeps DL at bay in both phases

– Coordinated player who carries lower half well, sticks to his blocks

– Balanced and rarely on the ground

– Some nasty to his game and looks to finish his blocks

– Can set his hips and get square to his blocker, even on scoop/reaches

– Burst off the ball out of a three point stance and shows some athleticism, capable of getting to the second level

– As much starting experience as you can hope for

– Uninspiring frame and looks to be close to being maxed out

– Opens the gate too early, prone to getting beat to the inside and overall, struggles to mirror

– Will lose his base when attempting to mirror, doubles over

– No particularly impressive trait physically, not elite in pass pro or run blocking

– Occasionally will get self overextended and fall off blocks

– 51 career starts, most in school history

The best thing about Johnson is how sound he is technically. Gets every inch out of his average arm length by getting his arms fully extended. Lets him get into the pads of defensive lineman and put himself in control. 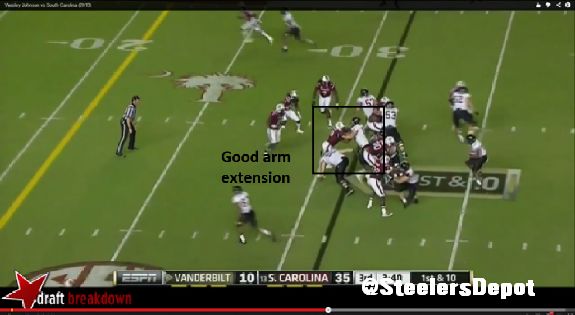 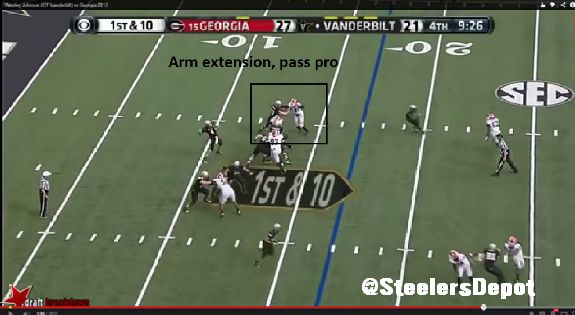 As noted, plays with proper pad level and hand placement while keeping his legs churning and his lower half underneath him.

When it all comes together, as it usually does, Johnson is able to generate a good push. His natural strength is only a little above average but when the technique is factored in, he’s proficient. Background in wrestling likely aided that. Staying on your feet and leverage are critical components.

Johnson is the left tackle, #67 in the clips.

Liked his ability to work in space and get to the second level. Can chip, reach the linebacker, engaged, and stick/drive. Don’t like guys that are limited to playing at just the LOS. Gotta be able to move and Johnson can, even though he’s not a special athlete.

While there were times he looked bad against him, he held his own against South Carolina’s Jadeveon Clowney. I came away impressed. And he didn’t receive a ton of help either.

Here’s Johnson showing the strength to anchor against a Clowney bull rush. It isn’t the prettiest sight but he avoids getting walked into the pocket.

Onto the negatives. Point blank, he won’t be anything more than a spot-start left tackle. Can’t play there long-term in the NFL. While Clowney didn’t get a lot of pressure against Johnson, Missouri’s Kony Ealy abused him. Johnson struggles to keep his feet moving while attempting to seal the edge and gets called for holding.

Nothing special below. Dip move and Johnson never gets engaged.

Occurred multiple times against Georgia, too. Again, called for holding after failing to push the end up the arc.

Happens again on the very next play.

Worth noting that Johnson was rarely called for holding. Don’t want to paint him as someone constantly flagged. During the game, the announcer referenced that was only the third time in his career he was called for holding. All in all, he’s a clean player and speaks to the technician he is.

Will attempt to overcompensate by anticipating a speed rush and opening the gate. Leads him to getting beat back to the inside. Seen here against Missouri. 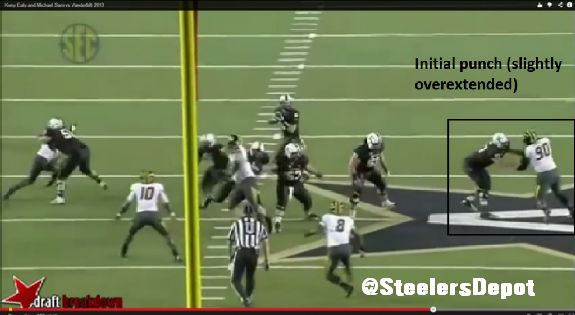 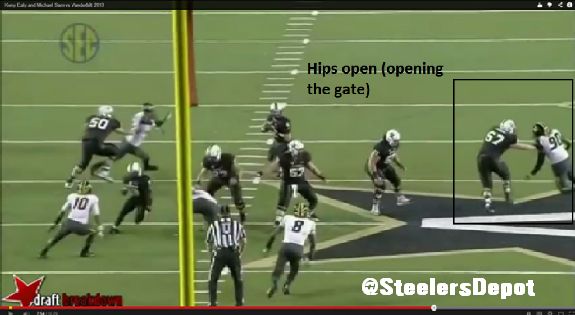 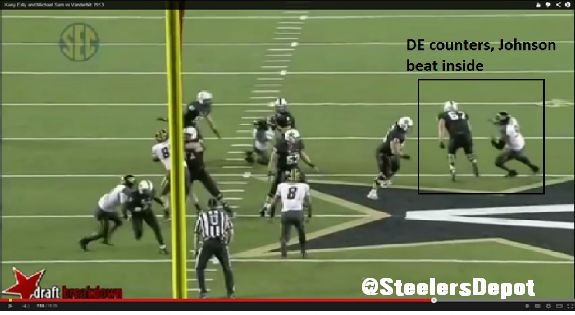 In general, he struggles to mirror. Times he tries to do so, he tends to fall off his base, get heavy-hipped, and double over.

He can still grow as a player but that upside is close to being maxed out. His frame is “meh” and he can’t add much more weight. He’s always played light. 250 as a high school senior. He reportedly came into his senior year at 287. Never been a big guy and it isn’t wise to ask him to add too much more weight. Wish he could add more but the reality is he’ll always be an undersized tackle.

Other element, and the more important one, is there isn’t a ton of room to grow as a player. After 51 starts, you get a pretty good feel for where his talent is at. This isn’t a true junior still learning his craft the way Ryan Shazier or Martavis Bryant are. What you see is what you get with Johnson. Only going to grow so much at the next level. He has the technical side down but the physical side is nearly maxed out.  Where’s the growth come from?

You have to admire the guy for being a throwback lineman who has probably always been underrated, overlooked, and internally played with a chip on his shoulder. Did what he was asked and was successful. Being an almost 40 game starter at left tackle in the SEC is no small feat. Coaches loved him at Vandy. His offensive lineman coach said he was the “model for what we look for in a player.” Versatility endears himself to a team like the Steelers that requires it from their backups.

But I don’t envision him as a starter. Talent is just going to overwhelm him at the next level. Will make the move to playing the interior line, likely at guard. A rich man’s Doug Legursky if you want to put a name to compare it to.
I recognize the importance of that but it can be a little difficult to get excited about.

Games Watched: at South Carolina, vs Missouri, vs Georgia

As always with these post-selection reports, my individual game notes.

9-14-13 at South Carolina: Uninspiring frame, needs to add sand to his pants. Not a bad showing vs Clowney overall. Didn’t allow a sack and only one pressure. Technically sound, good base off his kickslide – gets his butt down. Good arm extension even if he doesn’t have super arm longs and plays with proper hand placement/leverage. Core strength to anchor, encouraging for a player under three bills. Absorbed Clowney’s bull rush, even if it wasn’t pretty. Good upper body strength and generates a push. Able to get his hips set. Some nasty to his game, finishes his blocks. Bit of athleticism, enough to get to the second level even though not an explosive player. Overall, sticks to his blocks. Did look silly by Clowney a few times with quick burst/inside swim. Obviously, looked better when not facing him. Will lose base and get overextended while trying to mirror but showed just enough lateral movement to seal the edge. Occasionally fell off blocks. Whiffed on cut block in open field. Just a tick above average laterally and not a special athlete.

10-5-13 vs Missouri: More of the same. Does real nice job getting his arms extended and keeps DL at bay in both phases. Pretty good base off his kickslide. Proper pad level and leverage. Strength to anchor in pass pro. Decent burst off the line in run blocking, gets to the second level. Good run blocker with strength and can get a push. Struggles laterally and beat multiple times by Kony Ealy. Allowed one sack. Opens gate too early trying to protect himself and prone to getting beat inside, trouble mirroring. Nothing special physically. Sticks to his blocks well. Couple of snaps at TE in Heavy package.

10-19-13 vs Georgia: Ok game. Technically sound. Plays with proper bend with knee bend. Gets his arms extended and plays with proper pad level. Generates a decent push. Will show some athleticism to work to 2nd level and in space. Lower half coordinated with upper half, doesn’t get overextended. Does a nice job staying on his feet, shows balance. Just average laterally and can get beat around the edge, held once as a result and then allowed pressure on the next play. Struggles to mirror and not a particularly powerful run blocker. LT but a few snaps at TE in Heavy package.