A Pittsburgh Steelers player by player recap, grouped by position, reviewing the 2013 season. This round, a look at the tight end position.

Heath Miller: There are two schools of thought when it comes to evaluating Miller.

1. It was unreasonable for him to look the same only a little over eight months removed from tearing his ACL.

2. Heath Miller is 31 years old and will never fully be the same player he once was.

It was likely a combination of the two. But the fact is it will be a battle just to plateau, not decline for the rest of his career.

Miller was certainly never a vertical threat but set a career low in yards per catch at 10.2. He found the end zone just once, coming on a shovel pass vs the Baltimore Ravens.

His longest gains of the year tended to come on playaction where he didn’t truly gain separation himself. A 31 yarder against the Miami Dolphins stemmed from playaction on 4th down with the defense biting hard, leaving Heath wide open for an easy catch.

Oddly, with the return of glorified lineman Matt Spaeth to take on some of the blocking duties, Miller’s targets sank. He averaged just 3.5 looks per game following Spaeth’s return off the injured reserve to return list. Granted, that can be partially explained by the team passing less.

He’s still sure-handed but is really going to struggle to get open as a receiver. There just isn’t any separation in his game.

Having him return as a blocker was clearly a welcomed addition after seeing David Paulson bumble his way to a seat on the bench. Yet, it wasn’t as impressive as it had been and he fell off blocks more often than he has before. Example versus the Cleveland Browns where he couldn’t stick to D’Qwell Jackson, preventing Le’Veon Bell from picking up a first down on third down. 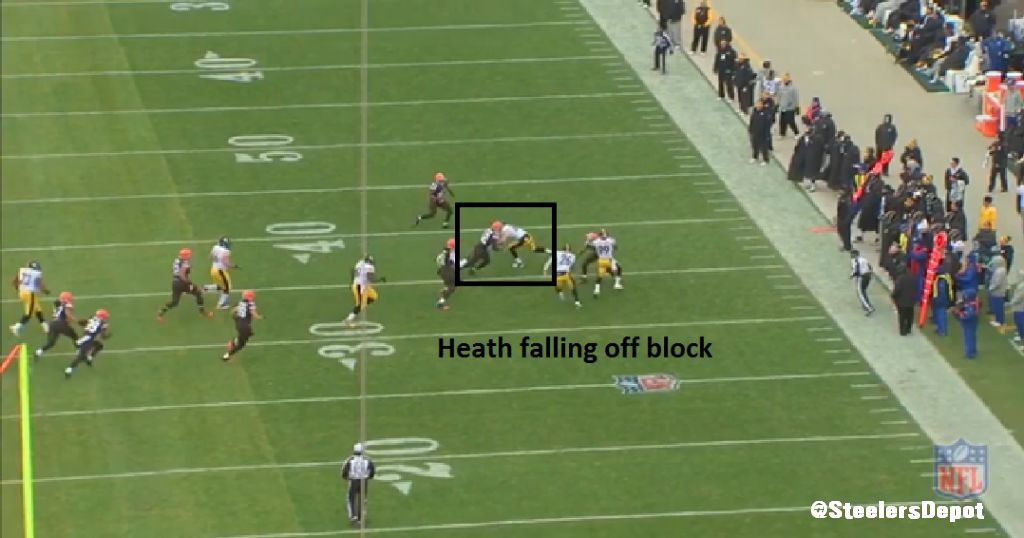 And against the Chicago Bears, albeit his first week back, a false step that allows Lance Briggs to knife through and make the tackle.

He still had his moments and on the whole, is an above average run blocker and an asset in that department.

Combing through my game notes, Miller just didn’t stick out. Part of that is his nature; he has never been the flashy player that jumps out on film.

He’s a workhorse, the junkyard dog that does the dirty work coaches love. That’s why he’s beloved in Pittsburgh. There were no “Waaaallce” chants. Only “Heeeath” chants for the best tight end in franchise history.

But the quality of the tape just isn’t as good as it once was.

This all sounds blasphemous. Feel like I have to go to Confession for writing this. But we’re not too far away from Miller being a glorified blocker with limited skill as a receiver.

It’s quite possible this is Miller’s final year in Pittsburgh. He’s a free agent after 2014. Heck, if there was a more viable #2 option on the roster, Miller could have been discussed as a cap casualty this offseason. It’d save four million to cut the tight end.

That won’t happen because there is no other talent on the roster. I’d love for the team to bring in a big, athletic tight end in this year’s draft similar to Cleveland’s Jordan Cameron or San Diego’s Ladarius Green. It’s a threat the team lacks.

If the team wants to use more 12 personnel going forward, as they showed once Spaeth returned, you can have one strong blocker and one receiving threat. Spaeth can be kept and mixed and match with the athletic tight end.

The athletic tight end can be flexed out into the slot with Miller serving as an in-line blocker. The possibilities are endless. Give yourself formation flexibility.

Matt Spaeth: Spaeth served as a sixth lineman once he returned from a foot injury in Week 14. He was a serviceable blocker, taking advantage of his 6’7 frame. But he was nothing special in that department, either not sticking to his block like on this goalline block against Nick Perry, who sheds and fills the lane. 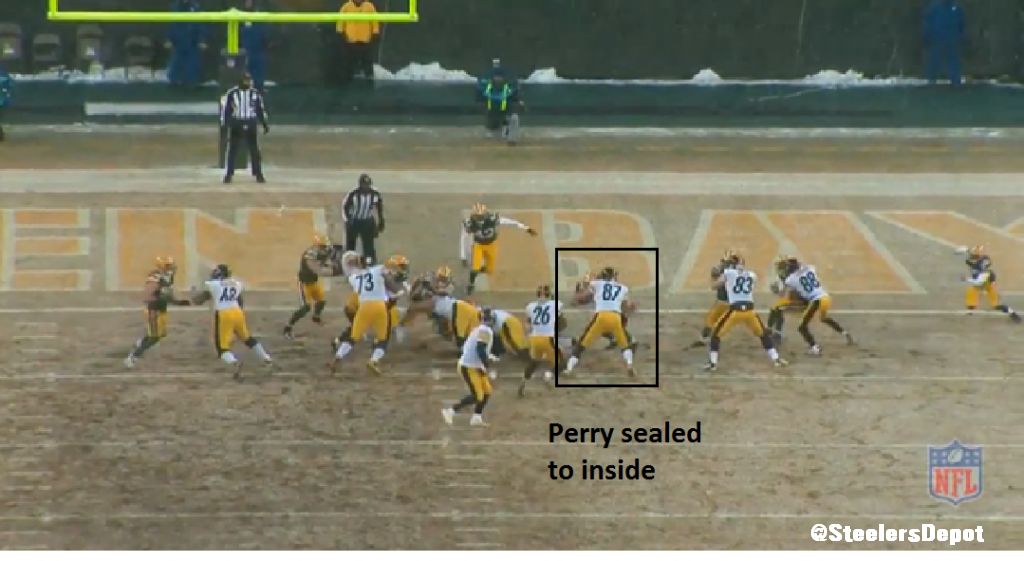 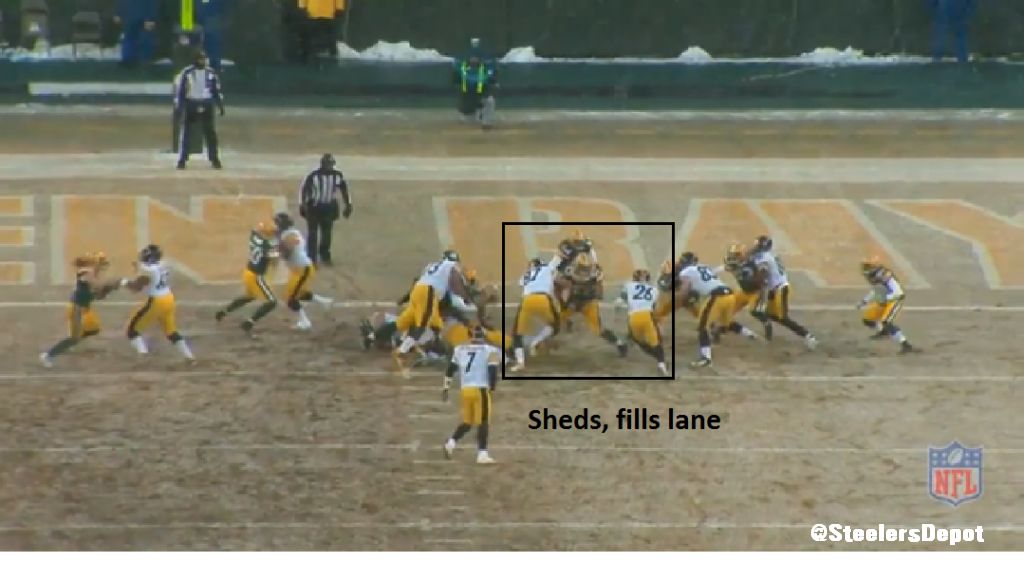 Or the team trusting him too much, like being asked to base block Carlos Dunlap and the end shedding with ease. 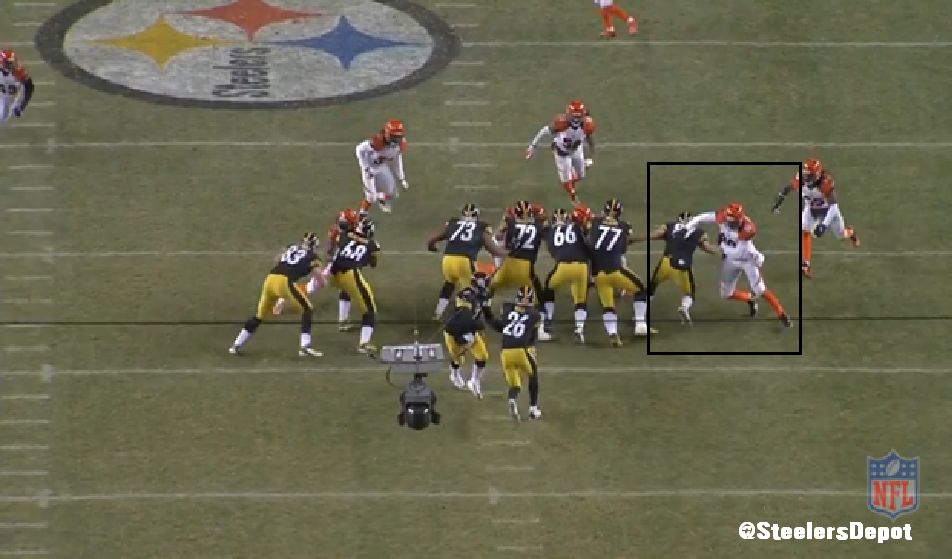 It wasn’t all bad. From the same game against the Cincinnati Bengals, he perfected a combination block to spring Bell into the end zone. 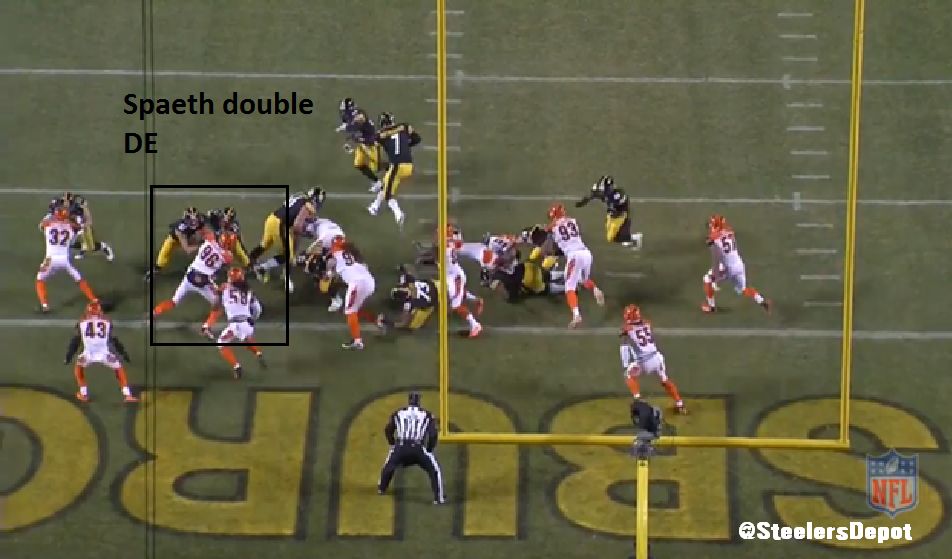 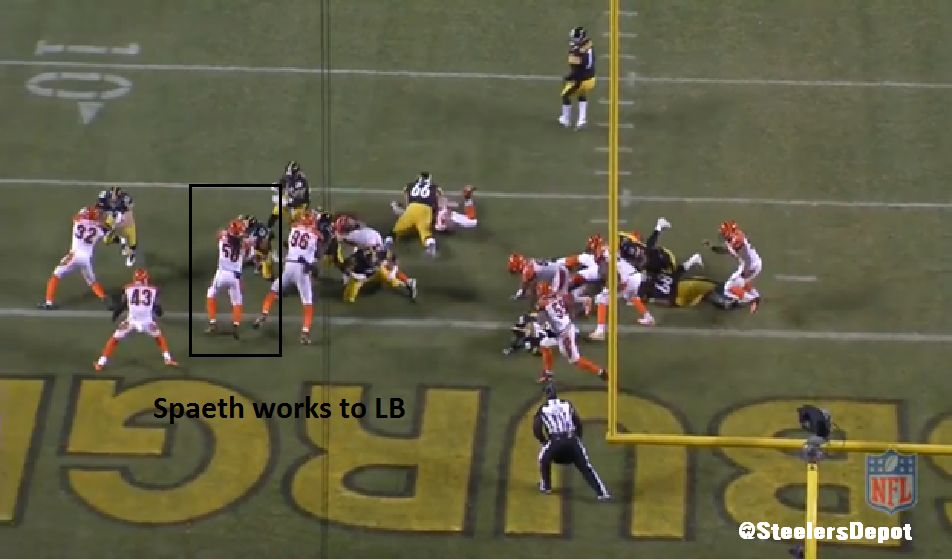 It comes to no shock as Steelers’ fans that Spaeth is a lumbering and little used receiver. He secured just one catch, an 11 yard touchdown against the Green Bay Packers.

Spaeth’s cap hit will be just a tick over 1 million next year. It’s almost certain he will be back and likely he break camp with the team in 2014 because of his run blocking.

But start he did the first two weeks. That’s where the majority of his playing time on offense came from, logging 55% of his offensive snaps over that span. Heath Miller returned and the team switched to a lot of 11 personnel or tackle eligible personnel.

The Titans game went without much of a hitch. But the Bengals game was brutal for Paulson, who fumbled after a 34 yard reception.

Then came his blocking attempt against safety Reggie Nelson.

A picture is worth 1000 words but I’ll add another. Terrible.

His contributions came on special teams, wearing hats on the kick return, punt coverage and return, and field goal units throughout the entire season.

The former 7th round pick still has two years remaining on his rookie deal but it would come as no surprise for him to be cut in training camp.

Late in the year, he surpassed Paulson on the depth chart, being used in some goalline packages. Palmer is set to become a free agent and though he could re-up on a one year deal to be the #3 TE, his abilities are a dime a dozen.

David Johnson: The former 7th round selection hurt his wrist in Week 6, landing on injured reserve. It marked the second straight season he was placed on IR after tearing his ACL the year prior.

I’ll admit Johnson has been one of my favorites as a solid run blocker. But that isn’t an asset that will separate you from others and the injuries are mounting. He is also set to hit the open market in March. Odds are better Palmer gets resigned than Johnson.