There is still a lot of discussion about whether or not the hit made by Pittsburgh Steelers linebacker Terence Garvin on Cincinnati Bengals punter Kevin Huber during the first quarter punt return for a touchdown by wide receiver Antonio Brown was legal or not.

As I stated early this morning, I believe that Garvin should have been penalized on the play for the hit and I expect him to be fined this week as well. I have reprinted the rule on defenseless players from the NFL rule book below and have bolded the sections that apply to this hit. I also have included the animated gif of the hit along with the exact frame that Garvin initially makes contact with Huber.

This is as cut and dry as it gets.

Article 7: Players in a Defenseless Posture. It is a foul if a player initiates unnecessary contact against a player who is in a defenseless posture.

(a) Players in a defenseless posture are:

(1) A player in the act of or just after throwing a pass;

(2) A receiver attempting to catch a pass; or who has completed a catch and has not had time to protect himself or has not clearly become a runner. If the receiver/runner is capable of avoiding or warding off the impending contact of an opponent, he is no longer a defenseless player;

(3) A runner already in the grasp of a tackler and whose forward progress has been stopped;

(4) A kickoff or punt returner attempting to field a kick in the air;

(8) A player who receives a ―blindside‖ block when the offensive blocker is moving toward or parallel to his own end line and approaches the opponent from behind or from the side, and

(9) A player who is protected from an illegal crackback block (see Article 2);

(10) The offensive player who attempts a snap during a Field Goal attempt or a Try Kick.

(b) Prohibited contact against a player who is in a defenseless posture is:

(1) Forcibly hitting the defenseless player’s head or neck area with the helmet, facemask, forearm, or shoulder, even if the initial contact of the defender’s helmet or facemask is lower than the passer’s neck, and regardless of whether the defensive player also uses his arms to tackle the defenseless player by encircling or grasping him; or

(2) Lowering the head and making forcible contact with the top/crown or forehead/‖hairline‖ parts of the helmet against any part of the defenseless player’s body; or

(3) Illegally launching into a defenseless opponent. It is an illegal launch if a player (i) leaves both feet prior to contact to spring forward and upward into his opponent, and (ii) uses any part of his helmet (including the top/crown and forehead/‖hairline‖ parts) to initiate forcible contact against any part of his opponent’s body. Note: This does not apply to contact against a runner, unless the runner is still considered to be a defenseless player, as defined in Article 7 above.

Note1: The provisions of (2) do not prohibit incidental contact by the mask or helmet in the course of a conventional tackle or block on an opponent.

Note 2: A player who initiates contact against a defenseless opponent is responsible for avoiding an illegal act. This includes illegal contact that may occur during the process of attempting to dislodge the ball from an opponent. A standard of strict liability applies for any contact against a defenseless opponent, even if the opponent is an airborne player who is returning to the ground or whose body position is otherwise in motion, and irrespective of any acts by the defenseless opponent, such as ducking his head or curling up his body in anticipation of contact.

Penalty: For unnecessary roughness: Loss of 15 yards and an automatic first down. The player may be disqualified if the action is judged by the official(s) to be flagrant. 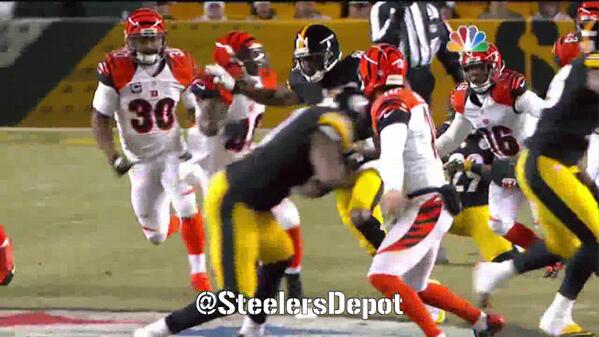