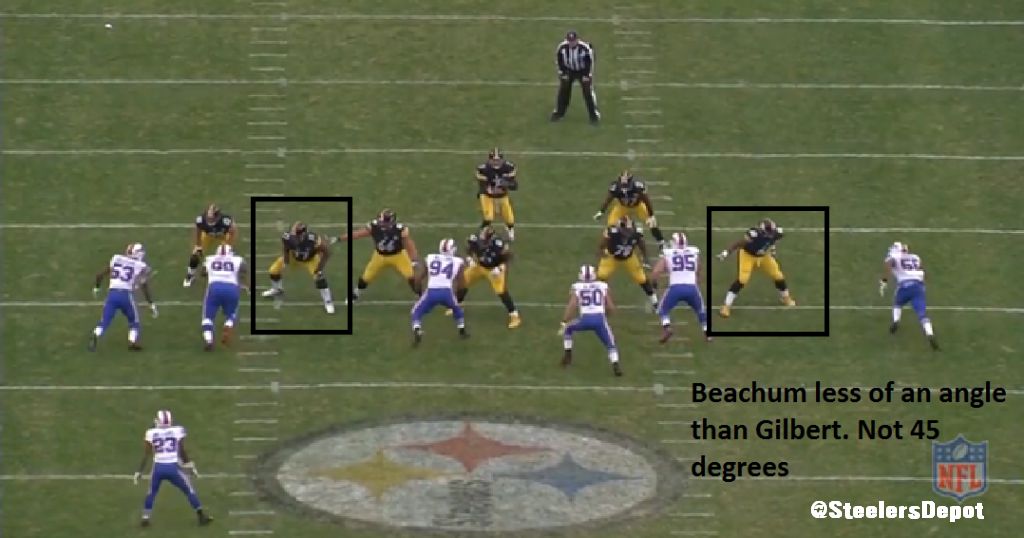 Breakdown of the four sacks the Pittsburgh Steelers allowed in Sunday’s win (rejoice Steelers Depot readers!) over the Buffalo Bills.

1. 3rd and 7, 9:29 2nd. Shotgun, 11 personnel. Five blocking vs a four man rush. Tackle/end stunt vs David DeCastro and Guy Whimper. End loops to the inside and the DT takes on the RT. Whimper overpowered by Kyle Willliams, knocking the offensive lineman off balance and sheds him. 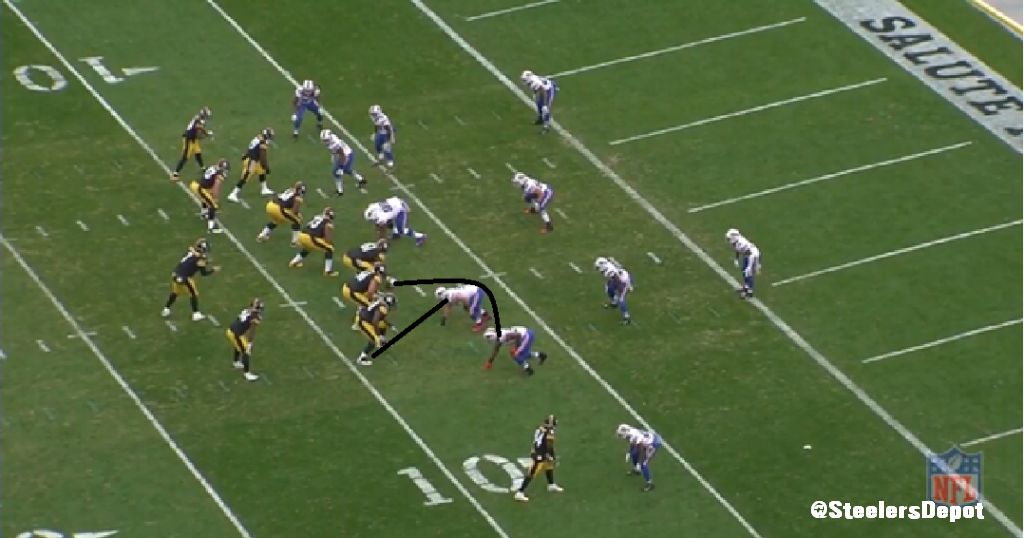 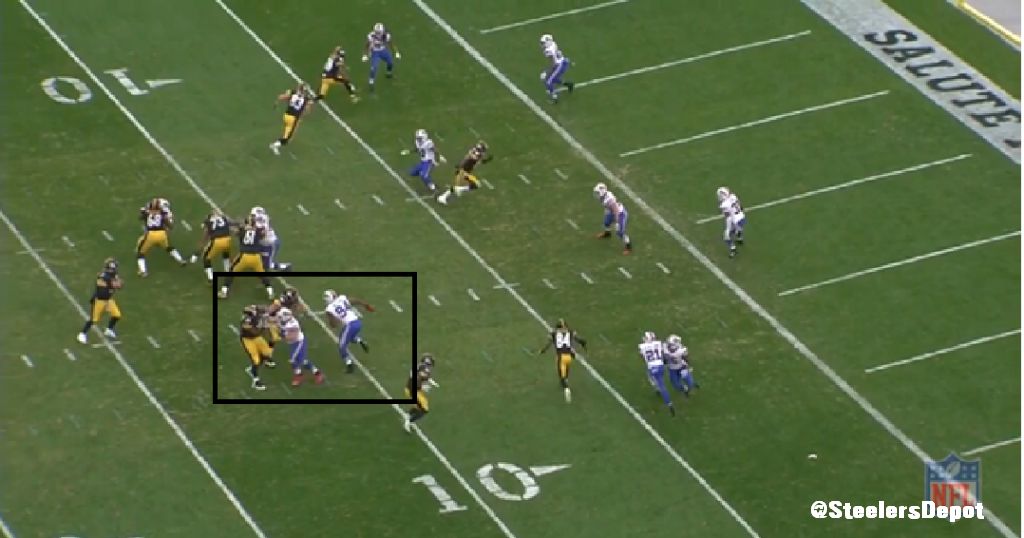 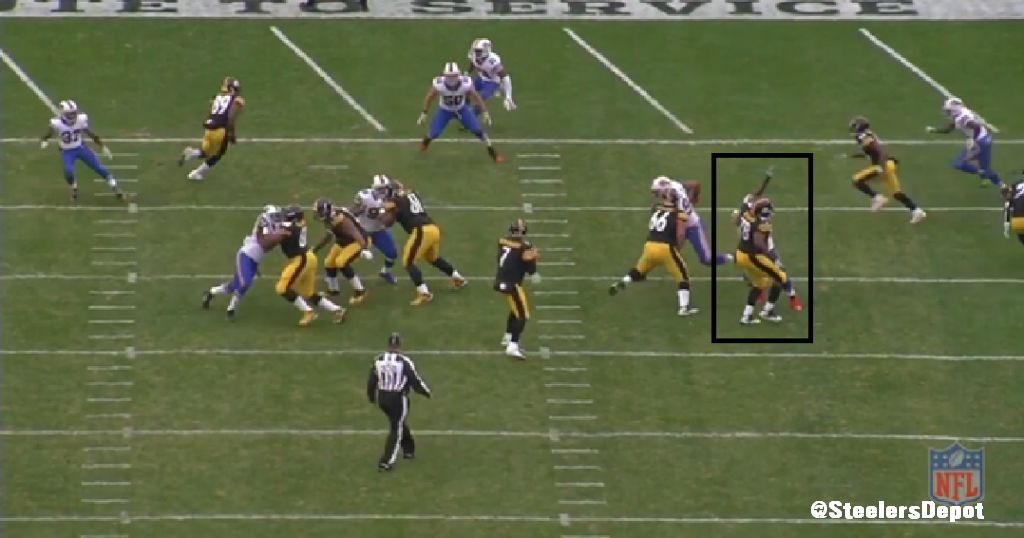 Whimper didn’t look ready for the stunt when he should have anticipated it. Bills were stunting when they showed a wide split with their DTs (under and nose lined up as three techs) in passing situations. Snapshot of Williams stunting from the left side on 3rd and 13 with 5:36 left in the first quarter. 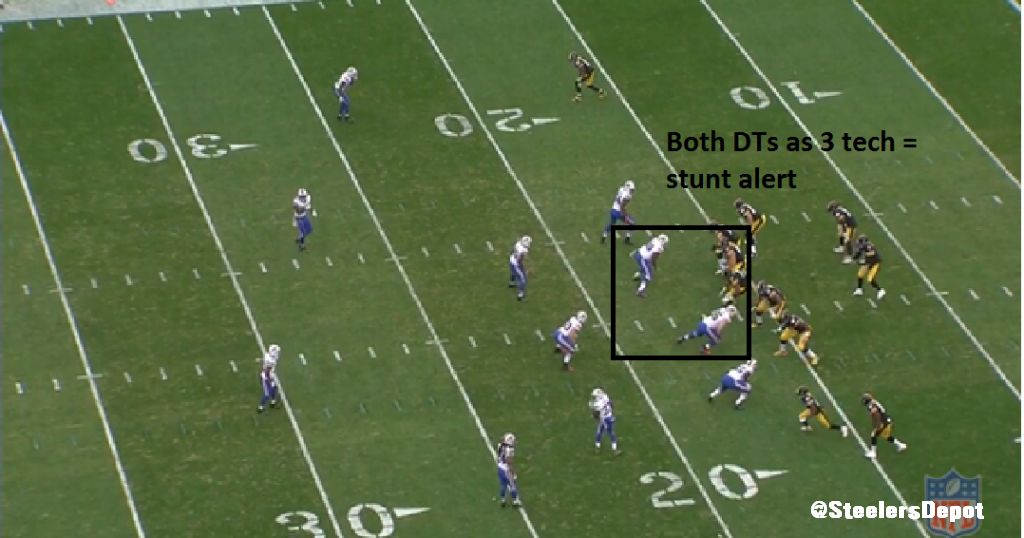 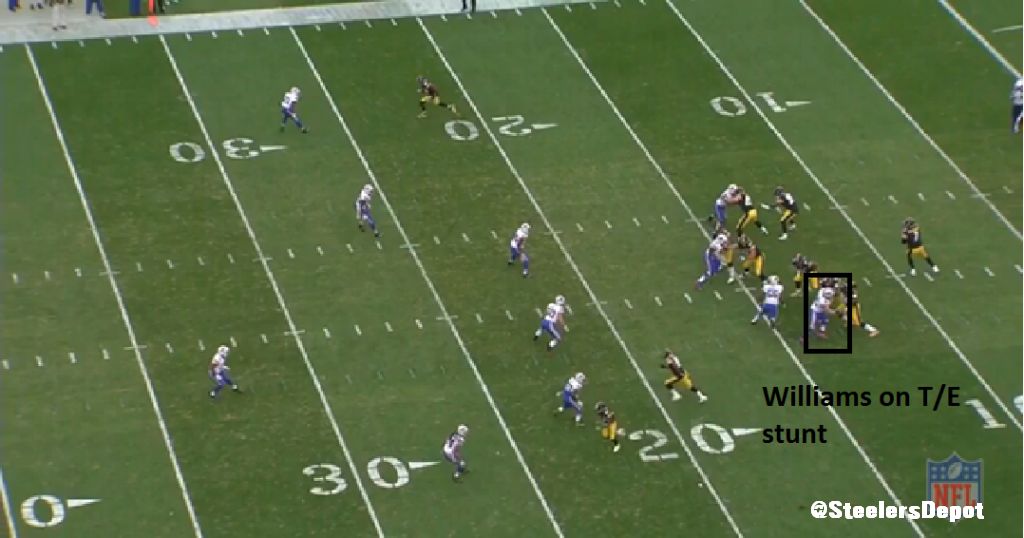 These are things that the line needs to be aware of when they go over series on the sidelines. And I’m guessing this is something the Bills have shown this tendency on tape. Which does fall back on coaching but because it’s impossible to say if the issue is player or coach issue (was Ramon Foster prepared and just screwed up or was he not coached up?) you’re forced to assume the player.

Williams is one of the stronger and better DTs in the AFC but if Whimper would’ve recognized it quicker, he could’ve anchored and absorbed the rush.

So the blame falls on Whimper for the lack of recognition and just flat out getting pushed around by Williams.

Steelers keep in six vs a four man rush. Team does get heavy pre-snap blitz look which screws up assignments when defenders drop. 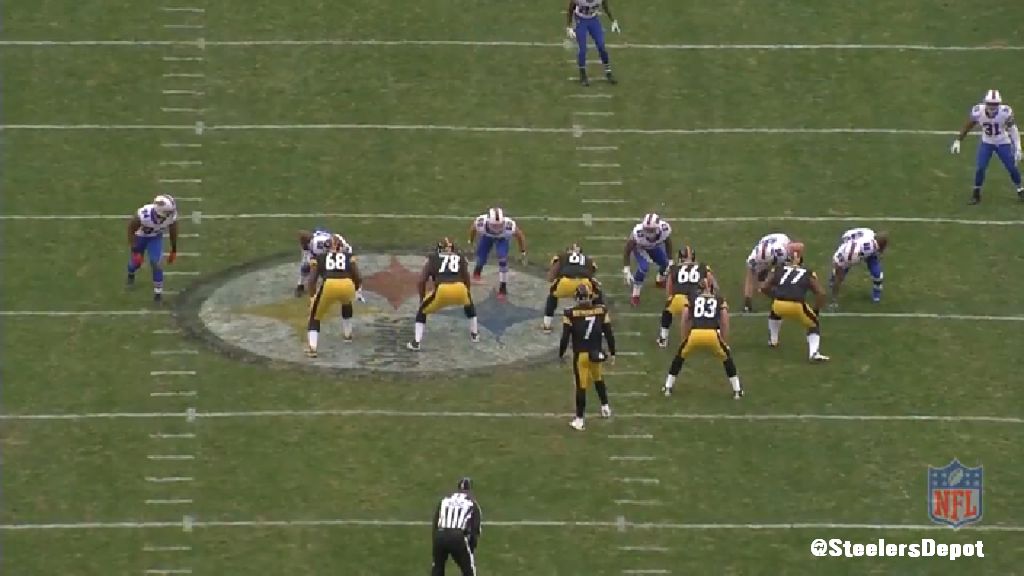 Effectively, with the LG and C not doubling anyone, you’re left with four blockers on four rushers. Problem one.

Aside from that, Marcus Gilbert gets beat by Marcell Dareus around the edge. Odd considering Dareus’ narrow alignment away from Gilbert and the fact Dareus is a 331 pound tackle. 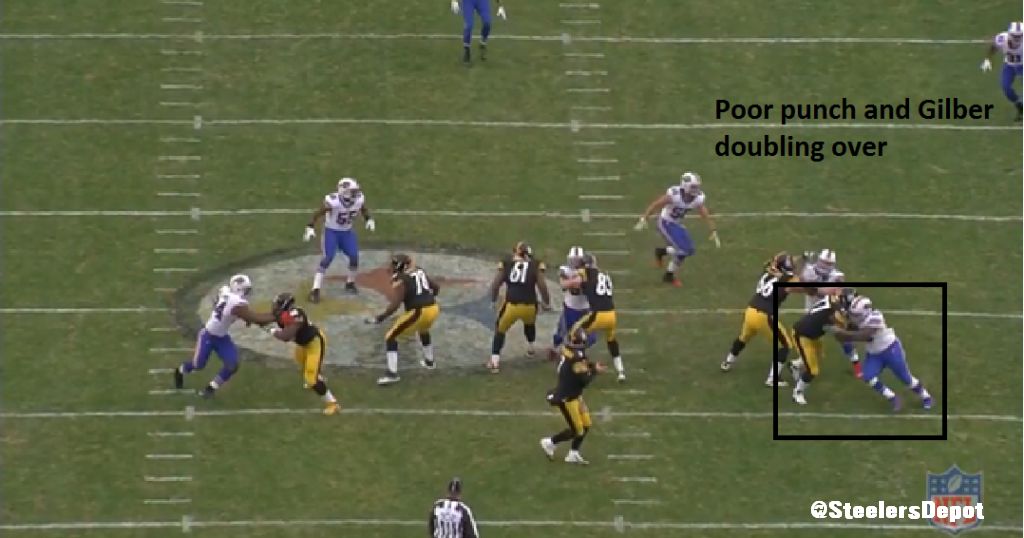 Poor foundation (top heavy, doubling over) and doesn’t get a good punch, hitting him in the shoulder. Dareus too strong to be slowed by that. He knocks the ball out of Ben’s hand but Roethlisberger able to fall on it.

Two elements at play that cause the sack. One, Ben should’ve attempted to hit a hot read. Have Jerricho Cotchery on the slant at the bottom of the screen, winning inside against the corner (as soon as Cotch crosses the CBs face, he’s won the route).

Instead, Ben drops his eyes and essentially just takes the sack. 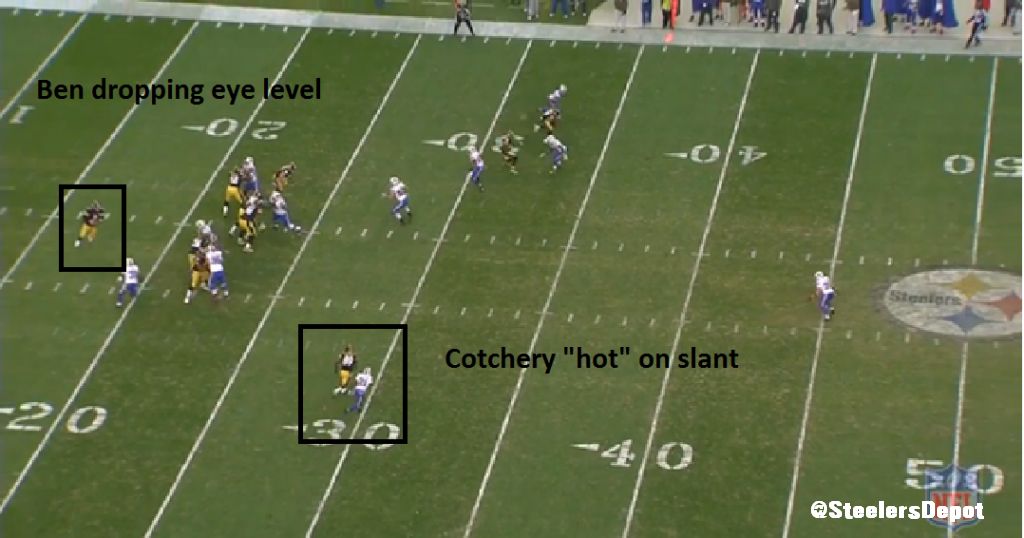 The other side of it entails the offensive line failing to pick up the blitz. Not only does the safety rush but the Bills stunt the LB to weakside “B” gap. DeCastro doubles the end. And can’t get move laterally in time to pick up the linebacker. Sees it at the last second and has no chance to cut the ‘backer off. 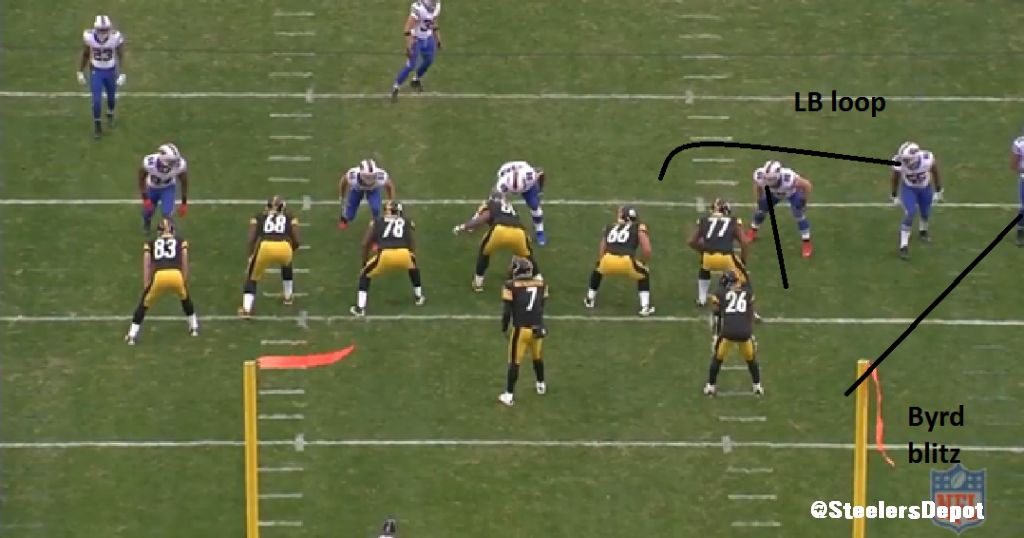 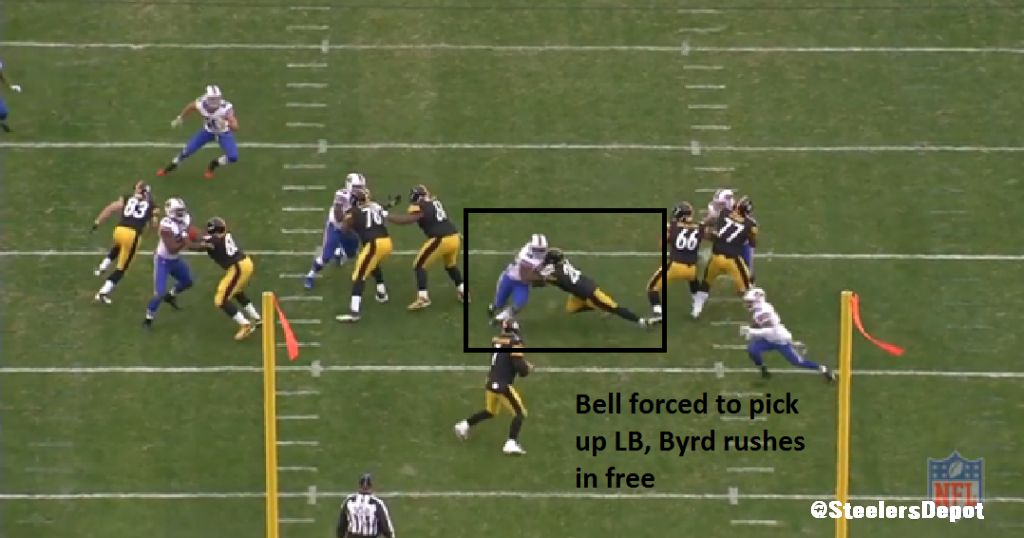 The last line of defense is Le’Veon Bell who initially was working towards picking up Byrd. But with the LB coming in free up the middle, Bell makes the smart decision to make him the top priority and push him out of the way. Work inside out and hope Ben can shrug off the smaller safety on an angle than the linebacker coming up the middle.

Ideally, DeCastro picks up the LB and Bell the safety and Ben has a clean pocket to work with. But unsurprisingly, the offensive line play (especially regarding simple stunt recognition) has been less than ideal.

*One other side thought. Could possibly be on Fernando Velasco because there were instances where he picked up the looping rusher (ex: the picture from the first quarter showing the stunt with wide split). But considering DeCastro’s reaction to the LB, trying to reach back at the last second, have to think it’s on him.

Blame: Ben Roethlisberger for not attempting to hit his hot and David DeCastro for missing the stunt and creating the domino effect that led to the sack.

4. 3rd and 11, 10:27 4th. Shotgun, 11. Seven blocking vs six man rush. Jerry Hughes lined up far outside of Kelvin Beachum (Wide 9). Beachum is decent off the snap (more on that later) but completely loses his foundation and bend when he goes to punch, bending at the waist. 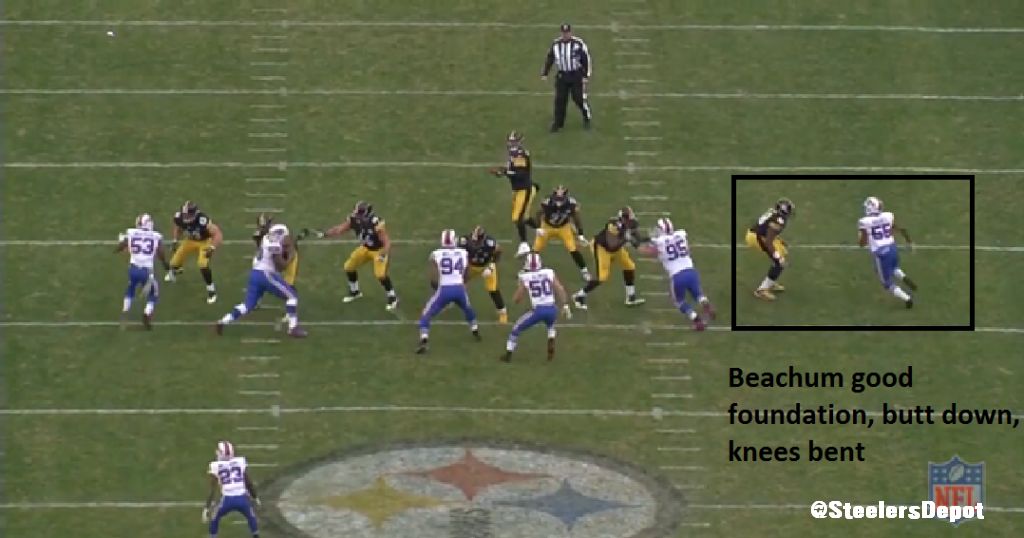 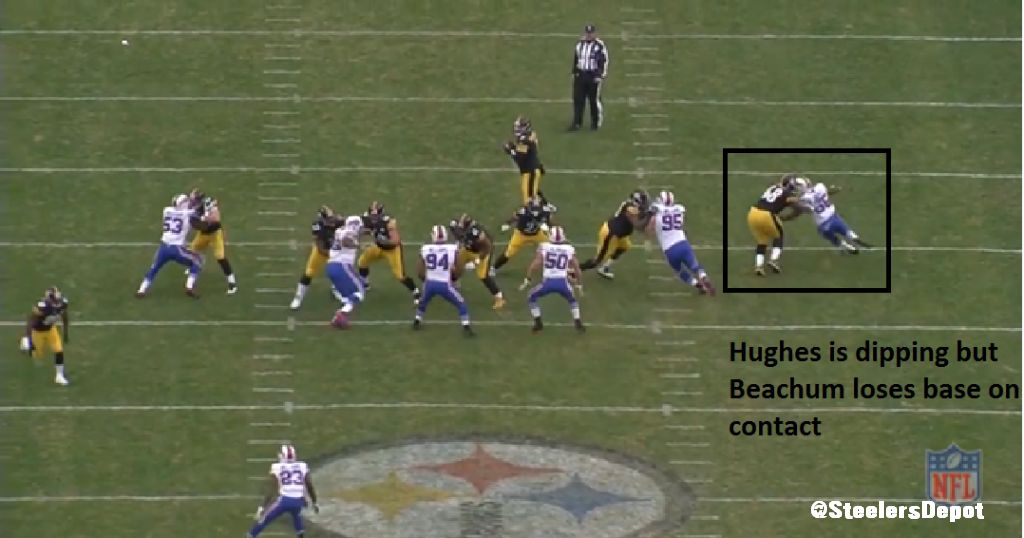 Tough assignment vs the athletic Hughes (has been a bust but still a great athlete) on such an angle but as a lineman, your base can’t dissolve as soon as you make contact.

Maybe I’m overanalyzing it too much but I’m seeing some flaws in Beachum’s kickslide off the ball. His angle is too harsh and it’s not letting him get enough depth to counter speed rushers. Because you’re not going to move as quicker as the defender in a straight line.

Compare Beachum’s left foot with Gilbert’s right. Gilbert is at a 45 degree angle like you’re taught. Beachum looks to be less than that.

It’s minor and better than what we’ve seen from some of the team’s tackles (Guy Whimper opening the gate preseason and Mike Adams doing it in the regular season) but could be tweaked. Something I’m going to monitor in my full game recap.