My full breakdown of Pittsburgh Steelers center Kelvin Beachum versus the Tennessee Titans.

– 1st and 10, 14:51 1st. TE eligible with David Paulson to his right. Pass protection with Paulson releasing. Loses balance, fails to stay square vs inside spin from Derrick Morgan. But a nice job getting back into position, getting in front of the DE and containing him. Athletic recovery.

– 1st and 10, 13:18. TE eligible. David Johnson and Paulson to his right, basically 13 personnel. Run. Base blocks five tech. Falls off at the end and the defensive end makes the tackle.

– 3rd and 8, 10:36. In at center following Maurkice Pouncey’s injury. LB blitz, picked up and passed off well between Ramon Foster and Beachum. Beachum takes the tackle who turns his back to him (just looks like terrible technique) so an easy block here for the second year man.

– 1st and 10, 9:52. Zone blocking. David DeCastro and Beachum double one tech before DeCastro works to second level. Play is off tackle to the left so a little weird to see the backside guard work to second level. Usually job of playside lineman.

– 2nd and 10, 9:09. Snap is high and to the right (picture below). Four man rush, DE loops in and Beachum picks him up. Knocked off balance a little bit, his knees lock up, but acts as a buffer to keep the pocket clean. 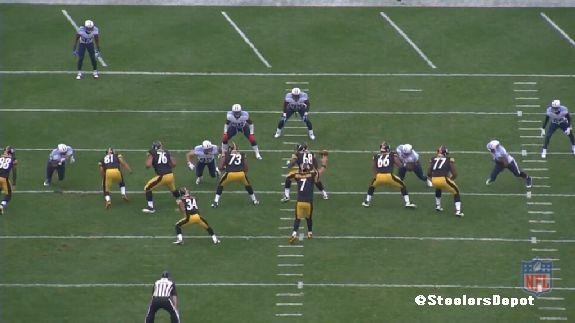 – 1st and Goal, 8:22. Was supposed to base one tech. Redman fumble, play blown up immediately.

– 2nd and 2, 2:49. Pass protection vs the DT. Good arm extension. Hand placement is a little high but gets into the DL’s pads regardless.

– 1st and 10, 2:31. Loses leverage, walked into pocket a bit by the NT (still maintains base though which is good, sacrifices a little ground which is smart). DeCastro helps him out and knocks the tackle away.

– 3rd and 15, :50. Pass pro vs DT. Keeps him at bay though it appears he may have playing more contain vs Ben Roethlisberger on 3rd and long. Loses his block though and the DT helps chip in on the sack when Ben steps up and scrambles though no official credit given on the stat sheet.

3rd and 8, 12:44. Pass protection. DT able to dip under Beachum, who doesn’t bring his feet and doubles over. Not able to generate power that way.

– 1st and 10, 12:03. Interesting wrinkle. Fake zone run and Beachum pivots back around to try and pick up the backside OLB. Able to lunge and get just enough to get in the way and give Ben enough time to hit David Johnson for a first down.

– 1st and 10, 11:20. Power O. Doubles closed side nose tackle. At least, that’s the design (RT to MIKE, pulling guard kicks out WILL). But Jurrell Casey (who may very well be an emerging stud at DT, for the record) lined up in “B” gap and able to shoot it.

Blows Beachum back, causing penetration and getting in the way of David Johnson’s (backside TE pulling) path, effectively taking him out of the play. Blows the play up and Redman ends up fumbling. Hard to pin it on Beachum though, just a real good play from Casey.

– 2nd and 16, 10:39. Double teams Karl Klug. DT gets under him and able to push Beachum down the line towards the RB. Doesn’t affect LaRod Stephens-Howling’s path, however.

– 1st and 10, 7:39 2nd. DTs cross stunt. Beachum doesn’t pass off with Foster properly and Beachum tries to carry the DT slanting towards Foster the whole way. Probably would have been beat if the stunt wasn’t executed so slowly. Have to pass off there. Pass intercepted.

– 1st and 10, :44 2nd. Four man rush. Casey hives him an inside step then outside and 68 has trouble mirroring. DeCastro is uncovered and able to help out. Bu Casey still able to get pressure and part of the reason why ben was flushed. Sacked by Derrick Morgan, allowed by Marcus Gilbert.

– 1st and 10, 15:00 3rd. Chips both DTs to help guards. At the last second before Ben’s throw, sees DE loop inside and in position to pick him up though ball out before they meet.

– 1st and 10, 12:24 3rd. Run off right guard. Good job at POA. Gets a chip from DeCastro but Beachum shows good leverage and wins vs Casey. Nice play.

– 3rd and 3, 11:02. Hard to say what should have happened on this play. Moise Fokou shows “A” gap pressure which Beachum has to respect (work inside/out) but he bails on the snap. Should Foster and Beachum try and slide down so LSH isn’t solo on the LB or isn’t there enough time? Beachum ultimately picks no one up and Ben sacked by LB Zach Brown.

– 1st and 10, 4:23 3rd. Screen. Smooth in getting to the flats but ineffective cut vs ultra-athletic Zach Brown. Barely phases him and he makes the tackle.

– 2nd and 3, 3:41. Heady play, helps pick up T/E stunt with Morgan again looping inside. Not the hardest stunt in the world to recognize, Morgan comes to him, but sill good to see.

– 3rd and 3, 3:35. Really low snap. May have been anxious with Fokou lined head up over him (pic below). Looks unsure of who to block, looking right/left/right. Seemed confused from start to finish. 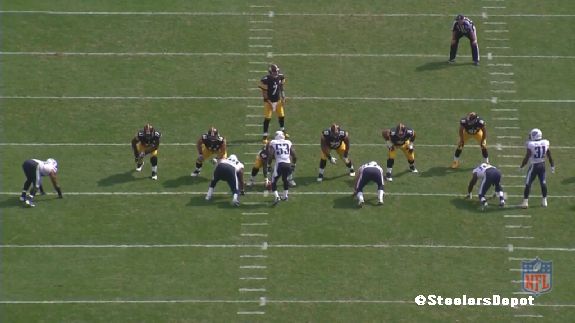 – 2nd and 10, 13:15. Initial double with Foster. Beachum stumbles trying to work to second level and can’t get to the LB.

– 1st and 10, 3:04. Blitz look pre-snap. Rush five. Slant NT down a gap and run the MIKE ‘backer into the “A” gap. SAM shoot through “B” gap. Another instance in which Foster and Beachum need to pass off and fail to. Linebacker comes in free and pressures Ben who is able to complete the pass.

– 1st and 10, 2:34. Doubles nose with DeCastro before Ben quickly gets ball out due to Gilbert allowing pressure.

– 4th and Goal, 1:26. Titans loop Wimbley from open side end to the “B” gap. Beachum there in position but two never engage with Ben hitting Jerricho Cotchery on a TD.

Obviously, it was a difficult circumstance for Beachum to be thrown into Week One. This is still a player with very little game experience at center and it’s a good thing he at least got to play the second half of the last preseason game there. So to an extent, you have to grade on a curve.

Most troubling yet understandable was Beachum looking lost and hesitant at times of who to block and what the pass protection was. He did a fine job picking up the big looping tackle/end stunts Tennessee threw at him all day but had trouble when having to do it within a confined space and help actually pass off a player to the guard.

It was hard to gauge Beachum’s run blocking with only 13 run plays. He flashed some strength and some positives in the leverage game. However, it was disappointing to see a pretty athletic lineman fail in his few chances in space, missing cut blocks or being unable to stick to his block at the second level.

Pass protection was up and down. Sometimes all on the same play (see his very first snap). If he starts at center, Beachum will get his hardest test all year Monday night vs Geno Atkins. He must be able to anchor and absorb and maintain his base or Atkins will eat him up.