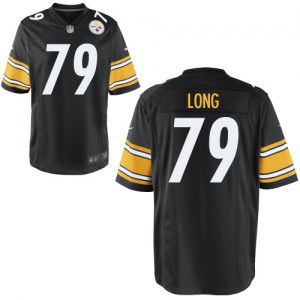 It\’s no secret that the Pittsburgh Steelers have question marks surrounding their depth at the tackle position heading into training camp, but one player who\’s trying to prove he\’s capable of filling a backup tackle role during the OTA sessions is Joe Long.

Long was originally signed by St. Louis Rams in 2012 as an undrafted free agent out of Wayne State where he started a school-record 49 straight games, all at left tackle. However, he was released by the Rams prior to the start of the season and stayed unemployed until the Steelers signed him to their practice squad in late November, where he stayed for the remainder of the season.

Long, whose older brother, Jake Long, played left tackle at Michigan and was the No. 1 overall pick in the 2008 NFL Draft by the Miami Dolphins, impressed the Steelers enough during his short time on the practice squad that the team decided to sign him to a futures contract following the conclusion of the 2012 season.

Through the first three weeks of the Steelers OTA sessions, Long has been given the opportunity to compete against Guy Whimper, who the Steelers signed to the roster several weeks ago, and he talked about the work he\’s getting in practice earlier in the week with David Todd of ESPN 970 Radio.

“I\’ve been getting reps with twos – playing both the left and right side,” Long told Todd. “Me and Guy Whimper, we\’ve been flipping every series – going with the left, first series – right – left. So just kind of flip-flopping on the second string.”

Being as Long was with the team late last season, he was asked if it makes things easier for him coming into this year now that he has a little familiarity.

“Oh, its huge,” said Long. “Coming in last year and getting to know the guys, the organization, everybody here and also getting familiar with the plays and everybody. So it definitely makes you more comfortable, and you have little more sense of confidence coming in this next year.”

While Long might not be new to the Steelers, his offensive coach is. Jack Bicknell Jr. was hired during the offseason to replace Sean Kugler, who left to become the head coach at his alma mater UTEP. Bicknell is implementing more of the outside zone blocking scheme this offseason and Long said that he\’s a fan of both his new position coach and the zone scheme.

“In college we were a big zone team,” said Long, who was named a first-team All-America selection and the winner of the Gene Upshaw Award as the top Division II lineman in 2011. “I like running zone and I love coach Bick. He\’s doing a great job meshing with players and things like that, and we\’re just working hard every day trying to master our technique and things like that.”

While Long might have been considered a “long shot” to make the Steelers 53 man roster a few months ago, his odds seem to have shortened now thanks to the Steelers deciding not to re-sign veteran Max Starks during the offseason. While Whimper might have 67 games worth of NFL experience under his belt, his play at right tackle the last two seasons with the Jacksonville Jaguars was down right awful, and he certainly isn\’t left tackle capable.

When the Steelers preseason games get underway in August, Long figures to get a lot of playing time at both tackle spots, and it will be easy to see if he has what it takes to be the fourth tackle on the team behind Marcus Gilbert, Mike Adams and Kelvin Beachum. At worst, he might wind up on the practice squad once again, but that\’s a “long” way away from where he wants to be.

So what did Long have to say to Todd when asked how his first nine OTA practices have gone for him? His “short” answer was straight and to the point.