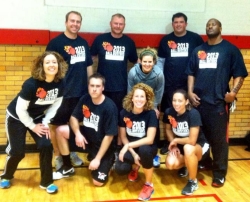 According to Alan Robinson of the Pittsburgh Tribune-Review, Pittsburgh Steelers linebacker James Harrison and his agent have yet to be asked to restructure his contract or take a pay cut with less than four weeks to go until the new league starts.

“There is nothing going on,” said Harrison\’s agent, Bill Parise, via the report by Robinson. “(If there\’s anything) it will be down the road.”

Parise had said earlier in the week that he didn\’t think Harrison should be asked to cut his $6.57 million salary.

So what is Harrison doing in the meantime? He\’s playing dodgeball. Harrison toyed with fans on his Facebook page Wednesday night when making that announcement.

“Signed a one year deal earlier today and its not with the Steelers,” Harrison posted. “I\’ll be playing with a new team starting tonight!”

This is not the first time that we have heard of Harrison partaking in the sport either as he played last offseason as well.

As far as the salary cap situation with the Steelers goes, nothing has changed recently as no players have been released and no contract restructures have been announced. That figures to change very soon and general manager Kevin Colbert reiterated that on Wednesday to Albert Breer of NFL.com.

“We\’ve always tried to do things that made sense for the current year, but also do things that wouldn\’t strangle you financially in the future,” Colbert said. “It\’s no different this time. We\’re getting in compliance. We\’re gonna have to have some terminations, some extensions, some restructurings. Figuring out the combination of all that, that\’s what we\’re doing now. We don\’t have to be compliant until March 12, so we have some time.”

While the bulk of the yearly offseason business changes will take place soon, Colbert made it known that they don\’t plan on gutting the team.

“Last year, we let go of significant players,” Colbert said Wednesday, via the report by Breer. “This year, that may or may not be the case. We never want to be in a position where we have to gut the team. We want to compete every year. And this year, we weren\’t able to. We didn\’t get in the playoffs. And that was a failure.

“But we want to avoid being in a position where we make that one-year, all-in run, then disappear.”

This is the second time that Colbert has mentioned terminations are likely since the season ended and it would be hard not to see any made between now and the first part of March. Until the contract situation with of Harrison is resolved, he remains at the top of the list of potential terminations. We should also expect an extension or two to be announced real soon along with the restructures. It is pretty shocking that word hasn\’t leaked out on a few of them already.

Harrison can dodge a ball and we will know soon enough if he dodged a pay cut and the turk.