The Pittsburgh Steelers dropped to 6-4 on the season following their 13-10 loss to the Baltimore Ravens Sunday night but they still remain in pretty good shape as far the AFC playoff picture goes with six games remaining on the schedule.

The Steelers currently hold the final AFC Wild Card spot heading into week 12 as the Indianapolis Colts hold the 5th spot by virtue of having the better conference record.

The Colts lost to the New England Patriots on Sunday and they still have to play the Houston Texans twice in their remaining six games. The second of those two meetings is in week 17 and it is yet to be known if the Texans will have anything left to play for in regard to home field advantage at that point and time.

The surging Cincinnati Bengals are one game behind both the Colts and the Steelers currently, but they will face the Steelers and Ravens in the final two weeks of the season. Hopefully the Steelers will have quarterback Ben Roethlisberger back by then, as that game could loom to be very important.

The San Diego Chargers and Tennessee Titans are holding on for dear life and neither can afford another loss the rest of the season. The Colts play the Titans in a few more weeks and the Steelers can put the Chargers out of their misery in just a few more weeks when the two teams face off at Heinz Field.

The Steelers face the Cleveland Browns this coming Sunday in Cleveland and it is a game that they must win. They also will close out the regular season against the Browns in Pittsburgh and that game could also be a must have depending on what happens over the course of the next several weeks. 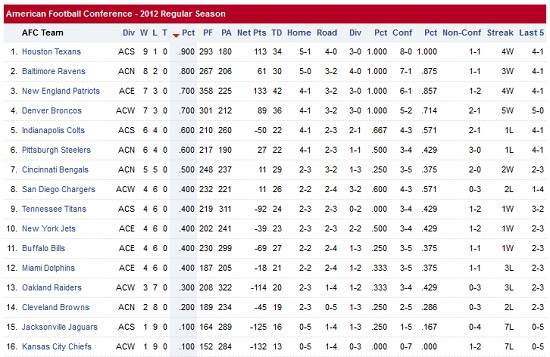