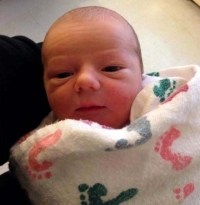 The caption of the photo reads, “Ben\’s favorite photo so far … and dad\’s new screen saver for his phone!”

The first child of Roethlisberger and wife Ashley was born Wednesday night and weighed in at 7 pounds, 1 ounce while measuring just over 19 inches.

The Steelers take on the Cleveland Browns Sunday in Cleveland, but will do so without Roethlisberger, who is out because of dislocated rib suffered in the win over the Kansas City Chiefs. Veteran Charlie Batch will start and will be backed up by the newly signed Brian Hoyer with Byron Leftwich also sidelined with a rib injury.

So do you think the baby looks like Ben? Where is his Terrible Towel at?