Below are the offensive personnel packages, play counts and participation chart for the Pittsburgh Steelers week 2 preseason game win Sunday night against the Indianapolis Colts.

Quarterback Ben Roethlisberger, guard Willie Colon and center Maurkice Pouncey were out of the game after 19 plays. As promised, Marcus Gilbert and Ramon Foster flipped over to their normal positions when the second team came in. Despite suffering a sprained knee last week, Mike Adams logged 36 snaps after at left tackle after Gilbert started there. David DeCastro received extended playing time as he logged 31 offensive snaps before calling it a night.

Kelvin Beachum played both left guard and left tackle once again, while Trai Essex only played right tackle this week.

The Steelers used fullbacks Will Johnson and Jamie McCoy on 20 plays total in the game and only 3 plays in total did neither line up in the backfield. On every play there was at least 1 tight end on the field.

Once again the offense never had 4 or more wide receivers on the field at one time, but there a handful of plays that either Chris Rainey or Baron Batch lined up in the slot. 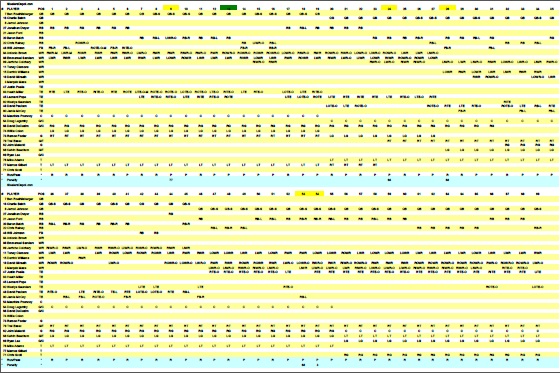