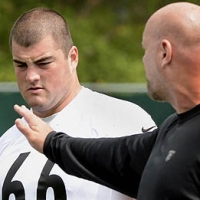 Quarterback Ben Roethlisberger was quoted as saying this week that his rookie guard, who will start Thursday night in the Steelers first preseason game against the Philadelphia Eagles, told him that he is struggling the most with the physical part of the game early in training camp, when asked to give a self assessment.

Tim Benz of 105.9 The X asked Kugler on Tuesday specifically how DeCastro was doing with the raw physical strength portion of his game. “David is a physical player and again, its not just about brute strength or anything,” said Kugler. “It\’s technique and leverage and those types things. He\’s been caught in different positions where he\’s been beat and you know its our job to explain it to him how to defeat that. And he works at it and I think David\’s the type of guy that if he makes a mistake, he\’s not going to make it twice.”

Also on Tuesday, my podcast co-host David Todd talked to Kugler for ESPN 970 Radio and asked him about the reports stating that DeCastro has been unimpressive so far.

“Well, I think he is doing fine,” said Kugler. “You know he hasn\’t played in one game yet. He\’s gotten better each day. The thing with him and Mike (Adams), they both missed OTA\’s so they were playing catch up as far as learning the system. He\’s gotten better these last four or five days. He\’s improved dramatically everyday, so I\’ve been pleased with both those young guys.”

Todd also asked Kugler about right tackle Marcus Gilbert, who has flown way under the radar in his second training camp with both of the rookies garnering all of the attention.

“We\’re expecting big things from Marcus, said Kugler. “Marcus was thrown into the fire last year unexpectedly with Willie\’s (Colon) injury and that\’s going to benefit him now. He\’s got 15 games under his belt, he knows what it\’s like to start in this league and prepare. So Marcus Gilbert, even though he\’s in his second year, we\’re counting on.”

In addition to DeCastro and Adams, the Steelers also added a third offensive lineman via the draft in the form of Kelvin Beachum. Beachum, who was drafted in the seventh round, was reportedly kicked inside to left guard early on, but is still taking some reps at left tackle, the position he played at SMU.

Todd asked Kugler which position Beachum would play Thursday night. “He\’s going to play both in the game,” said Kugler, who will coincidently turn 46 on Thursday. “He\’s a guy we want to evaluate at two positions. So he\’s going to play some left guard and left tackle and looking forward to seeing him. He\’s done an excellent job so far this training camp.”