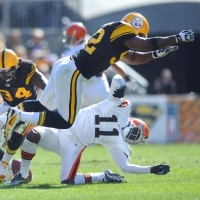 Pittsburgh Steelers linebacker James Harrison hasn\’t delivered one hit on the practice field since arriving to Latrobe for training camp, but that hasn\’t kept him from talking to the media on Tuesday and delivering a hit via a quote that is sure to rattle the fans of the Cleveland Browns.

According to Tom Reed of The Cleveland Plain Dealer, Harrison, who continues to rehab a bad knee on the Active PUP list, was asked Tuesday if it was a coincidence that he\’s knocked out three Browns players over the course of the last two seasons. After reportedly pausing, Harrison said, “I don\’t know. Maybe they need to get [their] helmets checked.”

Mohamed Massaquoi, Josh Cribbs and Colt McCoy are of course the three Browns players being referred to that Harrison knocked out the last two seasons. The Massaquoi and Cribbs hits came in week 6 game of the 2010 season, while the hit on McCoy, that resulted in a one game suspension for Harrison, took place in week 14 last year.

Harrison, who will now be highly scrutinized for every hard hit and tackle that he makes going forward, was reportedly asked if he\’s surprised that players for the Browns haven\’t challenged him more for his injurious hits on their teammates.

“Challenge me, what, to a fight?” Harrison said via Reed. “What does pushing do? It gets you a 15-yard penalty. That\’s stupid.”

Fellow outside linebacker LaMarr Woodley was asked to give his thoughts on the Harrison hits that have resulted in knocking players out.

“Not saying he\’s playing dirty, he\’s going out there making hits and guys just happen not to get up,” Woodley said, according to Reed.

While the comments that Harrison made Tuesday were not the most sensitive in the world, especially in light of all the concussion lawsuits that the league is facing, they are just what you would expect them to be coming out of his mouth.

Late last month the Kent State product was listed as recidivist violator in a concussion lawsuit led by former Oakland Raiders quarterback Ken Stabler. That lawsuit pointed to the fact that the league’s Super Bowl XLVI commercial regarding decades of changes to the rules failed to mention how repeat violators such as Harrison haven\’t been booted from the league permanently.

When asked specifically to comment about the Stabler lawsuit, Harrison said, “Who is – Ken who?” When it was explained further to him that Stabler was a former quarterback for the Raider, Harrison replied, “Never heard of him. His opinion doesn’t matter to me.”

As far as any future hits go, it might be a while until Harrison delivers any. The Steelers hope that he can make it back by the third preseason game against the Buffalo Bills, but that is far from guaranteed to happen right now. When the linebacker was asked Tuesday if, at this point, he had any concern that he won\’t be ready for the regular season opener in Denver, Harrison replied, “No. None.”

Now knowing that, the Denver Broncos should have plenty of time to get their helmets checked in preparation.