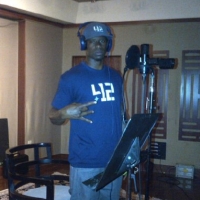 Pittsburgh Steelers cornerback Ike Taylor will reportedly unveil his singing talents for all to hear this coming summer as singer, songwriter and producer Jenna Garcia announced today on her blog that Taylor was busy in a New York studio this past offseason laying down vocals for two singles.

Garcia writes about Taylor and his musical endeavor, “Ike is giving us a chance to hear his style, his perspective, and his effortless Louisiana flow.”

Singing over tracks is evidently nothing new for the Steelers cornerback, who his entering his 10th season since being selected in the fourth round of the 2003 draft out of Louisiana-Lafayette. Garcia wrote, “Up until now, only close friends in his circle had the opportunity to hear Ike vibe on a track or flow over somethin’ on the radio, while training or on the road, but it was time to change that.”

Taylor can be heard every Tuesday on The Ike Taylor Show along with co-host John Harris of the Pittsburgh Tribune-Review which is broadcast live on Trib Live Radio.