It\’s another week in June, and in this edition of \’Steelers Rewind\’ we\’re going all out on tight ends.  Happy Father\’s Day!

Tight ends \’tall\’ in Arians\’ new offense, but what happened to Jon Dekker and Cody Boyd?

It was June, 2007, and Bruce Arians had replaced Ken Whisenhunt as the Steelers\’ offensive coordinator.  His plan was to start using two tight end packages.  Arians felt that the tight ends, especially Heath Miller, had been underutilized the previous year (34 catches and five touchdowns).  On the other side, Jerame Tuman only had seven catches and a single touchdowns.  Shockingly, that was nearly half as many touchdown catches as the Steelers\’ top four receivers, according to Chuck Finder for the Pittsburgh Post-Gazette.

Arians no longer wanted his tight ends to run decoy routes, so he increased the size and got away from the mindset of using tight ends as tackles (like they did often in the 1970s) – see Larry Brown.  Those five (mentioned above) were only undersized in height standing next to Max Starks (6\’8″) and Jason Capizzi (6\’9″), who were offensive tackles.

“You like tall guys that can run and block,” Arians said. “These guys are tall, but they all bend real well. They can block at the point of attack. They\’re good receivers. So they\’re nice complements.  It\’s a heck of a group.  Maybe the best group I\’ve ever been around. They give us great versatility.”

Arian\’s idea caught on in the AFC, especially the AFC North.  The Cleveland Browns brought in Kellen Winslow Jr., and the Baltimore Ravens added Todd Heap.  With his ideal “package of three”, Arians felt the Steelers were set at the position to gain more receptions in addition to blocking potential.  But what happened to Dekker and Boyd?

Heath Miller had already redefined the position for the Steelers.  He had 73 receptions and 11 touchdowns in his first two seasons (he was drafted in the first round – 30th overall pick – in 2005).  He was named the Steelers Rookie of the Year.  In the 2006 opening game for Pittsburgh, Miller caught three passes for 101 yards, including an 87-yard touchdown reception.  It was the longest catch by a tight end in a regular season game since 1974 (even though instant replay showed he was out of bounds at the one, but the officials didn\’t get a challenge from Miami Dolphins coach Nick Saban in time to overrule the touchdown).  It was the longest catch ever recorded (at the time) at Heinz Field.  2007 saw Miller setting new career-high touchdowns, receptions and receiving yards.  After helping win Super Bowl XLIII, Miller had his second Super Bowl ring.  Miller continues to be a favorite target for Ben Roethlisberger and is one of the most beloved Steelers in history.  Can anyone say “Heeeeeeeeeeeeeeeeath” any louder?

Tuman was the Steelers\’ fifth-round pick in the 1999 NFL Draft.  Although he was primarily used as the second-string tight end, he was used often during two tight end sets and on special teams.  2000 was Tuman\’s first real season with the Steelers after only playing in seven games in 1999.  In 120 games for the Steelers, Tuman caught 46 receptions for 541 yards and seven touchdowns.  He was released by the Steelers in February of 2008 and quickly snatched up by Whisenhunt, the head coach at Arizona.  After appearing in only three games for the Cardinals, Tuman was released in December only to be re-signed for the playoffs after Cardinals tight end Stephen Spach tore an ACL.  Tuman retired after the 2008 season.

Spaeth was the other go-to man in 2007.  He\’d been picked up during the third round (77th overall pick) in that year\’s draft. Spaeth took over when Tuman was placed on injured reserve that year.  During his first season, Spaeth caught five passes for 34 yards and three touchdowns.  Spaeth increased his value the following season by adding 17 catches for 136 yards during the regular season and a trip with the Steelers to the Super Bowl.

Spaeth went on to sign a contract with the Chicago Bears as a replacement for Brandon Manumaleuna and a book-end to Kellen Davis.

Spaeth was always considered more of a blocker in the run game rather than a receiver.

Dekker was a Princeton man when the Steelers brought him into training camp in 2006 as a rookie free agent.  He spent the rest of the season on the practice squad.  In 2007, Dekker played in only three games for the Steelers.  Although Dekker was part of the Super Bowl XLIII team, he was on the waived/injured list in August of 2008 due to injured knee.

In January of 2009, Decker was arrested in Old Town Alexandria, Virginia, after police responded to a complaint at 3:30 a.m.  Dekker fled police, but was apprehended and bailed out for $1000.  Dekker was acquitted of an obstruction of justice charge for using a false name.  Dekker had faced up to a year in jail and a $2500 fine.  Dekker told the judge that he fled because the arresting officer told him he was being arrested for being drunk in public and Dekker didn\’t want to distract the Steelers organization or team just days before the Super Bowl.

Dekker ended up going to the United Football League (UFL) to play with the Florida Tuskers (who later became the Virginia Destroyers).  He is no longer listed on their roster. 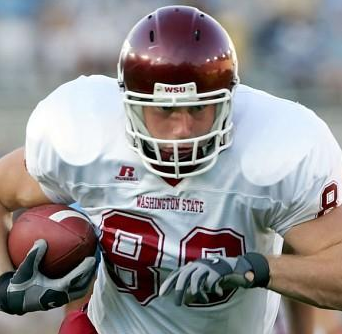 That brings us to Boyd.  Boyd was a football, track and basketball star in high school.  At Washington State University, Boyd was a redshirt freshman (2003-04).  He spent time on special teams as well as tight end, blocking two field goals against Idaho in his first collegiate game and later another against New Mexico.  He played basketball after the football season and injured his shoulder while lifting weights after playing only two games.

During the 2004-05 season, Boyd had seven starts as a red-shirt sophomore and began to see action in WSU\’s two-tight end sets.  His longest pass of his career was against Arizona for 38 yards.  He missed four games due to another shoulder injury.

As a junior, Boyd again was consider a red-shirt.  He had nine starts but continued to see more action on special teams than at tight end.  He missed the first two games of the season due to a badly sprained ankle and contributed five receptions for 65 yards.

Almost half of his career 35 receptions (446 yards) were garnered during his freshman season and was named to The Sporting News all-Pac-10 freshman team.

Signed as an undrafted free agent in 2007, the Steelers released him prior to the start of the 2007 season and Boyd spent part of the remainder of that year with the Washington Redskins (splitting time between the active roster and practice squad).  The Steelers once again brought Boyd into training camp in 2008, only to see him injured in practice and needing shoulder surgery.  The Steelers waived him the following day.  In 2009, Boyd had a tryout with the New York Giants, but did not make the squad.  Boyd never played a single snap in a regular season game in the NFL.

In the end, Arians\’ statement of using three tight-ends must have stuck.  Lee Vickers ended up coming to the Steelers as well during the 2006 season, but was waived before the regular season.  Vickers moved on to the Philadelphia Eagles, spending a brief time on their active roster but never saw any playing time before being waived.  Vickers\’ next move was to Baltimore as a free agent in 2007, where he played in nine games and made two receptions for four yards.  On August 16, 2008, the Steelers again signed Vickers only to release him 16 days later.  The New York Giants showed interest in him and he was signed on March 4, 2009, only to be waived on September 1.  In what must have been a frustrating time for Vickers, the Washington Redskins signed him to a reserve/future contract in 2010 but he ended up being signed by the Omaha Nighthawks of the UFL, where he currently remains on the roster (2012).

Lyons has the size and was in Steelers camp last year. On March 21, he was re-signed by the Steelers but appears to be a long shot to make a final roster position.

McCoy was waived by the St. Louis Rams after they thought he may make a fullback.  On January 18, 2012, the Steelers signed him to a future/reserve contract, but no word has come from the organization on where they think he\’ll fit into their scheme.

On April 10, 2012, the Steelers signed Pope to a one-year contract.  Some say it is because he spent time with new offensive coordinator Todd Haley in Arizona and Kansas City the past six years.  Pope has yet to clear 250 yards in those seasons, but Wes Saunders is suspended for four games and the Steelers may be looking at Pope to give them depth as a veteran.

After being picked up in the 2012 NFL Draft, the former University of Oregon H-back, Paulson was signed by the Steelers to a four-year contract after being selected in the seventh round.  Scouted as having soft hands and an ability to exploit the weaknesses of defensive backs, he may battle for that number three spot during training camp.