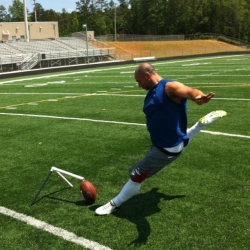 Former Pittsburgh Steelers kicker Jeff Reed is not ready to hang up his kicking shoes just yet. The eccentric player known for his spiked hair, and at times colorful lifestyle, continues to train under the watchful eye of a personal trainer in North Carolina.

Reed, who just wrapped up coaching at a kicking camp this past week at Queens University in Charlotte, said Thursday that he trains every morning for about two and half hours starting at 6:00 a.m. and kicks religiously on Sundays at 1:00 p.m. to simulate game times.

Reed, who spent his first eight plus seasons in Pittsburgh, was released by the Steelers in 2010 following the 39-26 loss to the New England Patriots in week 9. In that game he missed a 26-yard field goal that he claimed was a result of the turf moving when he planted his foot. The miss made Reed 15 of 22 on the season in field goal attempts and it led to him being bombarded with questions following the loss. Some of the answers to those questions that Reed gave were interpreted by many as shots at the fan base and the organization.

Following his release, Reed landed with San Francisco 49ers where he finished out the season by hitting 9 of 10 field goal attempts. Following the lockout last year he spent the preseason with the Seattle Seahawks before ultimately being released prior to the start of the regular season. Reed did not kick at all in 2011.

On Thursday Reed made it known that he has no hard feelings toward the Steelers organization or the fan base. I asked him about the comments he made following the Patriots game concerning the fans. “When I look back, I just want people to know, the fans, it was nothing on them. The only reason they were negative toward me is because they know what I am capable of doing and I understand that,” said Reed. “I know what I\’m capable of doing. If I had a bad game it\’s frustrating to me and I don\’t have anything wrong with the fans. I think the fans are great.”

During that same post game interview Reed also talked about the grass moving during his chip shot miss and said that he had mentioned to the organization several times that he had problems with the field. I asked Reed to clarify those remarks on Thursday and he let me know that he just thought that too many games were being played on Heinz Field between sod replacements. Heinz Field of course host home games of the Pitt Panthers, and several high school games are played there during the season in addition. Being as Reed was a team captain, it was his duty to inform them of that, he said.

Reed does not hide his want to return to Pittsburgh. “There\’s nothing better than playing for the Pittsburgh Steelers. Do I want another shot? Heck yes, man I wish I was in Pittsburgh, but it\’s not on me,” said Reed. “I know my talent can take me to greater heights and I could be the number one scorer in Steelers history and I could have the number one percentage in Steelers history. I could do all of that, but it\’s not up to me. Its all about timing and they\’ve moved on.”

Because the Steelers have moved on for now does not mean that Reed has fallen out of touch with the organization. “I had a good conversation with Kevin Colbert a month ago on the phone, over 30, 45 minutes,” said Reed. “I have no hard feelings toward the organization, I just want another chance.” Reed continued on to say, “I miss the team, I miss the organization, I miss the Rooney\’s, I miss Coach Tomlin. I just know that I have plenty left in the tank and that\’s what bothers me. It\’s not that I\’m bothered by the organization at all.”

The Steelers currently have kickers Shaun Suisham and Danny Hrapmann on their 90 man roster as they head towards training camp, but anything can happen between now and then. Hrapmann was really not the Steelers first choice to bring in as a camp leg to challenge Suisham as Grant Ressel was signed following the draft. Ressel did not last long as he was released following the rookie camp.

Bringing back Reed to challenge Suisham in training camp would not be a bad idea in my opinion. Assuming that Reed would accept a qualifying contract for the veteran minimum, it would present a great training camp battle. Suisham, who signed a four-year deal prior to the start of the 2011 season, is scheduled to count almost $1.69 million against the 2012 salary cap. Should he be released prior to the start of the regular season, he would count just $337,500 in dead money in 2012 and $675,000 in dead money in 2013. The cap cost for Reed on a one-year qualifying contract would be $540,000 if no signing bonus was given.

Reed is resigned to the fact that rosters are full at this time of the year, but said that his agent stays in touch with every team. “I don\’t think there are too many spots open right now to be honest with you, but injuries happen, mis-hits happen.” Reed said Thursday. “I can\’t really say that I\’m going to be in a training camp. I hope so. All I can do is pray everyday that God lets me know my next step and that\’s just the way it is.”

In the meantime Reed said that he will continue to work his tail off as he knows that a call could come at any given moment. He said he nailed a kick last week from 60 yards with no wind and that his kick-offs, something that was a knock on him, have improved and that he has good hang time and distance.

Reed ended the talk I had with him by saying, “I\’m just hoping that I get another chance.” Will the Steelers give him that chance? I think they should.

You can hear my 25 plus minute interview with Jeff on the Friday edition of the Terrible Podcast.