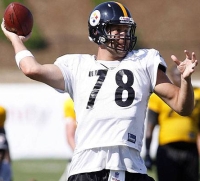 Is it homage or is it want? It is likely both as Pittsburgh Steelers quarterback Ben Roethlisberger was spotted wearing the No. 78 jersey by Ed Bouchette of the Pittsburgh Post Gazette today during the teams\’ final OTA session of the 2012 off-season Thursday at Heinz Field.

Of course that number belonged to his good friend and former teammate, Max Starks, who is currently a free agent and still recovering from surgery to repair a torn ACL that suffered against the Denver Broncos in the AFC Wild Card game last year.

Roethlisberger in no stranger to wearing the No. 78 though, as he also was spotted wearing it last year during training camp. Following that first practice wearing it, Roethlisberger was asked about it. “We were the last two of our draft class (2004), and Max\’s locker was next to mine for seven-eight years now. So I saw (his jersey), I grabbed it and wore it in honor of Max,” said Roethlisberger. The quarterback continued by saying, “First and foremost, he was a very good friend,” said Roethlisberger. “Like I said, our lockers were next to each other. So we spent a lot of time together, everything from hearing him snore [during naps] to us complaining about things to just all the things we\’ve gone through. A very good friend, good teammate and I\’m not going to [rule] out the possibility that he might come back. Who knows?”

Starks had been released just prior to training camp last year, and while he was not signed back before the start of the regular season, the Steelers did bring him back on a one-year deal following their loss to the Houston Texans in week four after both Jonathan Scott and Trai Essex failed to prove worthy of starting at left tackle. Luckily Starks still had a firm understanding of the offense and was able to get up to speed quickly to start week five against the Tennessee Titans. He played well in his return and claimed that the adrenaline of being back helped power him through that game. Starks ended up starting the rest of the year at left tackle and he stabilized the Steelers offensive line that seemed like a merry-go-round due to all the injuries and combinations that were used.

That same left tackle spot remains up in the air currently as the Steelers head towards mini-camp next week. Second round draft pick Mike Adams will finally be on the field after missing all of the OTA sessions due to school requirements. Adams will be given every opportunity to win the left tackle spot, according to offensive line coach Sean Kugler on Wednesday. Kugler said that Adams and first round draft pick, right guard David DeCastro, will both get plenty of reps with both the first and second team units next week in an effort for them to show on the field what they have digested thus far from the playbook.

With Adams not participating since the rookie mini-camp, that was held right after the draft, the Steelers have worked Scott, Essex and second year tackle Marcus Gilbert all on the left side. It seems pretty obvious though that Kugler really wants Gilbert to stay on the right side, where he started most of his rookie season after Willie Colon suffered his triceps injury against the Baltimore Ravens in week one. Gilbert is getting reps on the left just in case Adams can\’t win the job it would seem and Kugler said as much on Wednesday.

Starks, who was back in Pittsburgh for a charity golf tournament the weekend before the first OTA session started, was spotted at the Steelers facility that first week getting his knee checked out by the team doctors. That is normal practice even though Starks is currently unsigned and nothing can really be read into that. Starks had even stated that he had yet to have discussions with the organization about a possible return, but he said that he does still hope that very thing comes to fruition as he has not given up playing somewhere in 2012.

Starks recovery timetable is still sketchy, and it is likely that he will not be cleared medically by the time training camp gets started in Latrobe. About the time the Steelers break camp and get into their pre-season schedule is likely the more realistic time frame for Starks to be cleared to play. Should Adams not have a good showing in camp or pre-season, then and only then will the Steelers most likely consider turning to their former third round draft pick. So basically Thursday will most likely not be the last time you see Roethlisberger wearing the old No. 78, which just so happened to not be issued to any of the rookies or undrafted players this off-season. You think Roethlisberger had anything to do with that?

EDIT: Roethlisberger talked about Starks with the media today & I will update this post a bit later to reflect what he said.