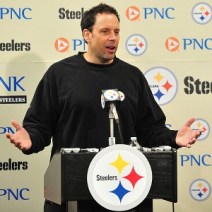 Pittsburgh Steelers quarterback Ben Roethlisberger graduated from Miami (Ohio) University this past week and now he and the rest of the Steelers offense will go to summer school in attempt to graduate from Todd Haley University.

Roethlisberger has not been shy about telling the media types in recent interviews that the offense that new offensive coordinator Todd Haley is installing is pretty foreign to him thus far. He has even made a few references to it as needing a Rosetta Stone book to understand it. Roethlisberger was recently quoted by Ed Bouchette in the Pittsburgh Post Gazette in regard to comparing classes he took to graduate to a recent one that Haley recently taught, “That one\’s a little harder than the Miami ones I was doing. I joke and say that my final paper for Miami on Tibet was a lot easier than the Rosetta Stone we\’re doing now here.” Roethlisberger also was asked how much change there is in the new offense versus what he had ran the last several years under former offensive coordinator Bruce Arians and he replied, “Everything, The similarities would be on a shorter list. Off the top of my head, from what I\’ve seen so far, there\’s a 90 percent change.”

Roethlisberger is not the only Steelers player on offense that seems somewhat overwhelmed by the changes Haley has made as third year wide receiver Emmanuel Sanders posted on Twitter, “This new playbook is something serious!!!!! Bout to go old-school and make some flashcards.” You can only imagine what the others on offense are thinking as well as they go through Rosetta Stone 101. Keep in mind that restricted free agent Mike Wallace has yet to sign his restricted tender and he likely will not be around until training camp begins at the earliest. It is unknown if he is even allowed to have his playbook yet being as he is not currently under contract, but even if he does have it, nothing beats putting it into action on the practice field.

Roethlisberger said right after Haley was hired that he hoped the offense wouldn\’t change too much as he was concerned about younger players being able to pick it up fast enough. He mostly was referring to his young group of receivers, who he said were just finally getting comfortable in the offense that Arians was running. He also stated though that he was not going to complain about moving forward at that time, and outside of his few “Rosetta Stone” jabs, he really hasn\’t. Bouchette quoted him saying this week, “I\’m just going to take it in stride and learn it and help us be the best we can be to win games.” That is a great attitude for a student to have and it only would be better if we found out he brings Haley an apple to every class.

The Steelers offense does have one thing on its side right now and that is time. Had this been last season there certainly would be a legitimate reason to be concerned as the lockout eliminated all of the mini-camps and OTA sessions. Trying to learn the offense in training camp alone would be tough, but this year there will be plenty of classroom and on the field time to get things ironed out before things get underway in Latrobe. In seasons past the starting offensive unit usually plays very sparingly during the preseason, so we might see a slight increase in playing time this year in the meaningless games. We shall see.

While the summer classes at THU will not be easy, the students seem smart enough and willing to learn. By the time the regular season rolls around we will know who passed and who failed summer school when we look at the final 53 man roster. Those that make the cut will have graduated and they will hopefully get their diplomas in the form of a jersey with their last name on it. Some will do it with honors, while others will just skate by. Like most graduations, there are always the gifts to look forward to and hopefully for the THU Class of 2012, one of those presents is belated and in the form of a Lombardi Trophy at the end of the season.

I sure hope Wallace gets the Cliff Notes and can take the classes online.