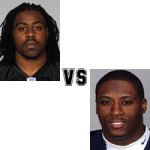 The Pittsburgh Steelers have completed their first two OTA practices of the 2012 season and quite a good bit of information has come out since the team has reassembled this week in Pittsburgh. The past few days we received confirmation on what we already knew heading into the week and that is that there are two fullbacks on the roster in the form of David Johnson and Will Johnson. Running back Jonathan Dwyer let us know this on our podcast just prior to this week and fellow running back Isaac Redman confirmed it to the media on Wednesday.

While training camp is still a good two months away from getting underway, it certainly seems that one of the battles setting up this far out is Johnson versus Johnson. David was a restricted free agent this offseason after his rookie contract was up and has since been tendered and re-signed. He was drafted in the 7th round of the 2009 draft and has played tight end, h-back and fullback for the Steelers over that span of time. He also has played on some special teams units in addition.

In three years David has caught 18 passes for 146 yards during the regular season to go along with 1 touchdown, which he scored last season against the Tennessee Titans. He also has nearly 870 offensive snaps under his belt over the course of the last three seasons that consist of a few great blocks to go along with a few missed blocks and assignments. While David is far from being a Pro Bowl caliber fullback type, and even farther away from being a Pro Bowl tight end, he did have four or five good cumulative games last season in the blocking department. He will never be the type of pass receiving option to run away from linebackers as either a fullback or a tight end and he is certainly not regarded as a special demon.

The other Johnson fullback currently attending running back meetings is Will, the 6 foot 2 converted WVU wide receiver who caught the eye of head coach Mike Tomlin at the Mountaineers pro day prior to the draft. This Johnson went undrafted in 2011 and was pretty much lost in laundry thanks to lockout last off-season. He worked three jobs this past year and continued to train in hopes of impressing scouts and coaches alike when he showed up at the aforementioned pro day back in March.

Although not part of the 2012 draft class, Will put up 225 pounds 30 times on the bench, which was more than anyone at that pro day, and one scout reportedly timed him at an unofficial 4.49 during his 40 yard dash. He played under the recently deceased Bill Stewart while at Morgantown, where he reportedly grew into his frame his final few seasons there. Stewart of course was responsible for giving Tomlin his first college coaching job many moons ago, so it would not be surprising to find out that Tomlin had already heard about Will prior to this past March.

The college tape of Will shows smooth route running and he plays fast on tape out of the backfield in addition. The only real question about him is if he can handle blocking at the NFL level. He played in 45 college games during his career at WVU and recorded 25 catches for 249 yards to go along with 4 touchdowns. Another pending question will be his ability to play on special teams. He is credited with 5 total tackles during his college career, 2 of which were solo.

While more and more tidbits continue to emerge as to what we can expect the new offense of Todd Haley to look like, it appears on the surface that a fullback could be included in certain packages. The only other player on the roster that appears to meet the criteria of a true fullback is Jamie McCoy, who spent a good part of the 2011 season on the Steelers practice squad. We have yet to hear the name of McCoy mentioned though in any of the fullback talk this off-season, so it figures that it could possibly come down to a Johnson versus Johnson training camp battle, if indeed the idea is to keep one of the two.

We will revisit this potential battle this closer to training camp getting underway as quite a bit can happen in the way of roster moves between now and then. If another true fullback type is added, hopefully his last name is not Johnson as well. I wonder if Ben Roethlisberger still thinks the team doesn\’t need a fullback.