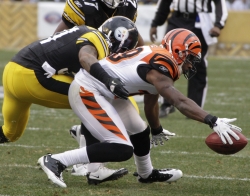 Pittsburgh Steelers cornerback Curtis Brown didn\’t see any snaps on the defensive side of the football as a rookie, but he did contribute quite a bit on special teams, a necessity for all young defensive players drafted by Pittsburgh.

Football Outsiders released their 2011 Special Teams Tackles Stats on Monday and Brown finished 11th on their list with 14 return tackles, of which 10 were regarded as stops. A stop, as defined by FO, is when a coverage player made it downfield to get a tackle (or assist) that stopped a return for less-than-average value. The stop rate for Brown was 71%.

Keep in mind that Brown only played in 12 games as a rookie as he was inactive week one against the Baltimore Ravens and he missed the remaining three games of the season last year due to a knee injury which eventually led to him being placed on injured reserve. That means that the rookie out of Texas averaged over one return tackle a game and nearly one stop a game. Had he played all 16 games, he likely would have finished in the top five easily.

Brown was regarded as a special teams demon while at Texas where he recorded 35 career special-teams tackles. He certainly has lived up to that billing thus far with the Steelers.

Not to be left out in the recent rankings is safety Ryan Mundy, who just made the list with 12 return tackles of which 6 were considered stops.

Brown had his meniscus repaired after being placed on injured reserve and by all reports is ready to pick up where he left off last season. He figures to compete for the starting nickel cornerback role this offseason and he will certainly be a fixture on special teams once again.