If one could make alive again for other people some cobwebbed skein of old dead intrigues and breathe breath and character into dead names and stiff portraits. That is history to me!
– G. M. Trevelyan

It\’s draft week…and so, as part of our weekly series of “rewind” articles, we\’ll step back and look at some of the memorable moments of the NFL Draft for the Pittsburgh Steelers.  There are so many stories of great players emerging from an unexpected location, a steal of a deal and even draft “busts”.  In Part One, I\’ll be painting some portraits from the cobwebs of Pittsburgh\’s great organizational history and breathing life into players forgotten, loved and those who simply made a blip on the radar. 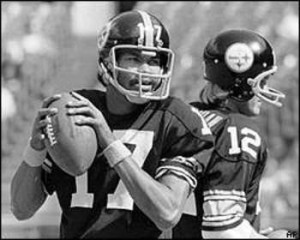 Joseph “Joe” Gilliam Jr., entered the NFL in a quiet way… a ripple that slowly grew into a large wave.  African-American quarterbacks were not well established in the National Football League, and many before “Jefferson Street Joe” saw themselves picked by teams only to be sat on the sidelines or dropped altogether.  Drafted by the Steelers in 1972 (11th round) after a stellar college career at Tennessee State University,  Gilliam was about to make history.  Coach Chuck Noll had seen the strength of Joe\’s arm and his competitive nature and needed someone to lead the team.  Gilliam and Terry Bradshaw competed for the starting position in 1974, and Joe initially won it.

Doug Williams met Gilliam in the early 1970s and the two were casual acquaintances, but had a tie neither would understand until Gilliam\’s sudden death in December of 2000.  Gilliam had earned himself a spot as one of the NFL\’s first black starting quarterbacks.  Williams was the first black quarterback to start and win a Super Bowl (Washington Redskins).

After Gilliam\’s funeral, Williams told the Pittsburgh Post-Gazette, “Joe made it all possible for every one of us black quarterbacks.  The struggles he went through eased the struggles we had to endure.  That\’s why I had to be here today. I wouldn\’t have been comfortable with myself had I not come here to pay respect to Joe for all he did to help the rest of us.”

Gilliam eventually lost his starting position to Bradshaw and was out of the NFL by the end of 1975.  It was a short run.  The news that Joe had hit hard times, even living homeless for up to two years, was shocking to some and sad to most.  Gilliam did return to football in 1981, playing for the semi-professional New Orleans Blue Knights of the Dixie Football League.  Two years later he tried professional football in the United States Football League (now defunct) with the Washington Federals.  His retirement from football altogether was made in 1986.

Today, fans would find it unthinkable to not see at least one African-American quarterback or player taken in the NFL Draft.  Times were different then, but Joe Gilliam helped change perception of what black quarterbacks could do in professional football.  It all started that day in 1972 when the Pittsburgh Steelers selected him.

DO YOU REMEMBER KEITH GARY? 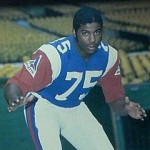 Some of you may be saying, “Who in the world is Keith Gary.  I\’ve never heard of the guy.”  Well, in 1981, the Steelers picked the 6-3, 250 pound defensive lineman out of Oklahoma in the first round (17th overall).  Gary was considered to be one of the top defensive lineman in the draft and was called one of Oklahoma\’s “most physical” defensive lineman since Lee Roy Selmon.  You\’d think you\’d really know who this guy was…

What is interesting is that after the Steelers drafted Gary, he didn\’t sign with the team.  Instead, he went North – all the way to Canada.  Gary spent two seasons with the Montreal Alouettes of the CFL before returning in 1983 to play with the Steelers.  Wearing number “92”, Gary stayed with the Steelers until 1988, amassing 25.0 sacks during that time (tackle stats were not recorded before 2001).

The idea behind selecting Gary in the first place was because the Steelers saw their QB sack total fall from 49 in 1979 to an NFL-low 18 in 1980.  For a defense that was known for its tenacity, that wasn\’t going to do.  According the the Sports Illustrated \’vault\’, Gary was brought into mini-camp.  When Gary vertically leaped all the way to Montreal, the Steelers were forced to look to their bench for defensive help.  They were forced to rely on John Goodman and Bob Kohrs to come off of the IR list.  In 1980, the Steelers gave up the most points they had allowed in 11 years (313).  Although Gary never was one of the Steelers\’ most well-known players, it was partly due to the decade (1980s).  The Steelers were struggling.  The team\’s press guide in 1981 actually said:

Only 17 players remain from the first Super Bowl team.

The fact that they had that many was far better than any other team could cheer about over the same eight-year span.  Gary was a part of an aging Steelers team that had seen a dynasty born in the 1970s and fall short in the 1980s.  The “great draft” of \’74 would always be remembered; Jack Lambert, Mike Webster, Lynn Swann, John Stallworth.

THAT LEADS US TO MALONE 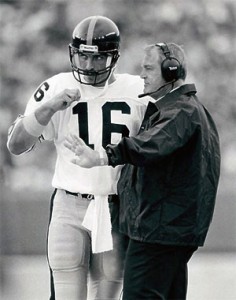 It took the Steelers a decade to pick a quarterback in the first round of the NFL Draft.  The Steelers grabbed Mark Malone of Arizona State University in 1980.  Malone was one the the nation\’s most highly recruited quarterbacks in 1975 where he played at El Cajon Valley High School outside of San Diego, California.  A possible decathlete for the 1980 Olympics, Malone became the 1980 Senior Bowl MVP before entering the NFL.

Behind Cliff Stoudt and Terry Bradshaw, Malone\’s 6-4, 233 pound frame made him an imposing player.  At the time, Bradshaw said of Malone, “He\’s unreal.  I keep telling him his days as a quarterback are numbered.  Nobody who plays quarterback should be that big, that fast and that good.  He\’s scary.”

In the eight seasons (1980-87) with the Steelers, Malone became the fourth-ranked quarterback in franchise history with 8,583 yards.  In 1984, he led the Steelers to the AFC Championship Game.  For his career, Malone passed for 10, 175 yards and 60 touchdowns.  He rushed the ball 159 times for 628 yards and 19 TDs.  Malone had the fortune to catch one reception for a 90-yard touchdown that stood as a Steelers record until Mike Wallace broke it last season (vs. Arizona Cardinals, 2011).

On August 9 of 1980, Malone got his first NFL start due to an ailing Bradshaw (flu) against the New York Giants.  Stoudt had been leading the offense, but the Steelers led 10-0 early in the fourth quarter.  In the first series, Malone found tight end Tom Graves for a 19-yard completion.  That led to two QB keepers and finally a bootleg around the right end for a 21-yard score.  It was nullified due to Graves lining up off-sides.  After the game, Malone said the play was his “impersonation of a running back.”

Malone said, “I\’m glad to be with Pittsburgh…I didn\’t want to go to a team that would use me at another position or become an instant starter because that would hurt me.”  He went on to say of Bradshaw, “I have a lot to learn and having Terry, the best in the business, is an advantage.  We have a good relationship and he has been teaching me quite a bit.”

Malone missed the entire 1982 season after being injured in a game against the Chicago Bears in which the Steelers used him as a wide receiver.  Some of his more memorable moments with the Steelers were:

In Part Two of this series, we\’ll take a look back at some of the most successful drafts in Steelers history, including the players that made them so.