Histories are as perfect as the Historian is wise, and is gifted with an eye and a soul.   —Thomas Carlyle

Often the history of the Pittsburgh Steelers is riddled with imperfections, and those who write about it just as flawed.  Last week we had a small error in one of our photos (and it was corrected, thank you).  Like they say, “Don\’t shoot the messenger.”  The great part about covering the history of the Steelers is that with our eyes we look back into the soul of an organization, and that is something special.

The Sporting News, a St. Louis publication, named owner and then-President of the Pittsburgh Steelers Dan Rooney as the top NFL executive.   Mr. Rooney also won the award in 1972, as did his father, Art Rooney Sr. (1974).  The award had previously been given to George Young, while he was with the New York Giants and an NFL executive, five times.  Young received the honor of having the Sporting News\’ award named after him in 2002, one year following his death.  Steelers Director of Football Operations, Kevin Colbert, came in tied for third-place for the award with the St. Louis Rams\’ General Manager, Charley Armey. 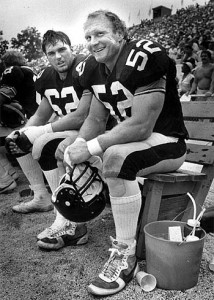 The Vindicator reported that All-Pro Steelers Center and Hall-0f-Famer, Mike Webster, was investigated and faced charges relating to forging prescriptions in order to obtain Ritalin.  The prescriptions were filled in Rochester and Center Township outside of Pittsburgh.  In Center Township alone, Webster was able to get the drug 18 times.  Webster reportedly announced in a press conference that he was taking the medication due to brain injuries sustained while playing professional football in the NFL.

It wasn\’t the first time that Webster had illegally obtained medications, and his story of drug addiction and desperate times is one that continues to sadden Steelers fans.  His untimely death at 50 years of age was not only shocking, but disturbing.  Nicknamed “Iron Mike”, Webster\’s post-football life was a tragic story of traumatic brain injury and its results.  He was often delusional, forgetful and sometimes paranoid.  Eventually, before his death, Webster found himself living in a vehicle, homeless.

Bob Fitzsimmons, an attorney who tried to help Webster clean up his legal woes was convinced that Webster had suffered closed-head injury due to multiple concussions received playing on the offensive line.  The now infamous disability claim filed with the NFL – the one in which Webster was awarded the lowest level (partial) for around $3,000 a month – has long been spoken of with disgust towards the league.

On a Saturday in September 2002, Bennet Omalu arrived at the Allegheny County coroner’s office to perform what he thought would be a routine autopsy.  Mike Webster\’s body was on the table.  Over the course of time, Omalu would end up fighting with the NFL and their doctors over whether or not he\’d proven that Webster had what University of Pittsburgh scientists and Omalu himself called “CTE”, chronic traumatic encephalopathy.  Even though his paper, “Chronic Traumatic Encephalopathy in a National Football League Player” was published in the prestigious science journal Neurosurgery, three scientists on the NFL \’payroll\’ wanted his article retracted.

It was when Julian Bailes, a neurosurgeon who had worked as a Steelers team doctor for nearly a decade, called Omalu, that the validation occurred.   The complete story is so remarkable that I can only suggest that you read the rest of the story.

In a new deal with the Steelers, head coach Bill Cowher signed a two-year contract extension to stay in Pittsburgh.  Cowher had succeeded Chuck Noll on Jan. 21, 1992.  His extension was a God-send for the Steelers when, at the age of 38, Cowher became the youngest coach to lead his team to a Super Bowl (1995).  In 15 seasons under Cowher, the Steelers won eight division titles, earned ten post-season playoff berths and played in 21 playoff games.  The team advanced to six AFC Championship games and appeared in two Super Bowls.  Cowher left the Steelers on January 5, 2007, after 15 great years.

Do you have memories of this week in Steelers history?  Share them with us in the comments section.