History with its flickering lamp stumbles along the trail of the past, trying to reconstruct its scenes, to revive its echoes, and kindle with pale gleams the passion of former days.  ~Winston Churchill

As you may have noticed, we\’ve begun a weekly series that takes a step back into Pittsburgh Steelers history.  The many greats we\’ve lost, the players forgotten and beloved and the defeats erased by many grand victories.  This week we\’ll stumble with our lamp on the path to this week (March 17-23) throughout the great annals of the Steelers\’ past. 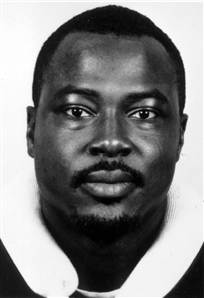 David Lamar Little, Sr., (known as David Little) began his career with the Steelers in 1981 as the seventh round pick(183rd pick overall) of that year\’s NFL Draft.  He played middle linebacker for the team until 1992 and earned a Pro-Bowl nod after the 1990 season.  Little played in 179 games, starting 125 of them.

On March 17, 2005, Little died of accidental causes.  Having heart disease, the Associated Press reported at the time that Little experienced a “cardiac flutter” which resulted in him dropping 250 pounds of weights he was bench-pressing onto his neck.  The result was asphyxia, according to the coroner\’s report.  He was 46 years old. 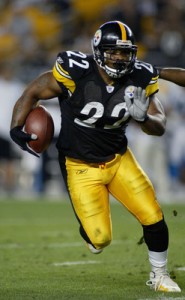 Bob Smizik wrote a rather scathing article about the state of the free agent search by Kevin Colbert, especially about the signing of Philadelphia Eagles running back Duce Staley to the Steelers roster.

Like 2012\’s pre-season free agency and salary cap conundrum, 2004 was another year to worry about the cap. The Steelers were looking for a necessary upgrade to their roster.

“The fanfare surrounding the signing of Staley was a bit much considering that his best season was in 1999, that he has run for 1,000 yards once in the past four years, that he has averaged less than 4 yards per carry three times in the past five years.”

Further mention of  a deal that was made with Jerome Bettis (in the same article) drew interest by fans concerned that Bettis would be under-valued once Staley started getting the call at running back.

Although  Sports Blog Archive nearly tore Smizik apart in their post, Smizik correctly predicted that the Steelers would go after a quarterback in the 2004 NFL Draft to be groomed by Tommy Maddox.  That quarterback ended up being Ben Roethlisberger. 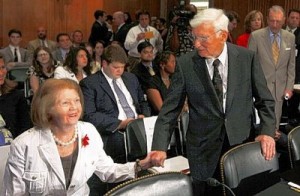 Dan Rooney and his wife, Pat, held a Hawaii family reunion of sorts to celebrate Palm Sunday.  The entire clan of children, spouses, grandchildren, etc. attended.  Even their own priest was present.

Even though the family was basically on a special retreat, Dan\’s eldest son, Art Rooney II, was candid with reporters on how he felt about the religion of Pittsburgh football fans – that it was time for another Lombardi Trophy to be added to the already growing collection.

Interestingly enough, Art Rooney II was eerily on target.  The Steelers faced the Seattle Seahawks at the end of the 2005 season, winning Super Bowl XL in Detroit;  21-10. 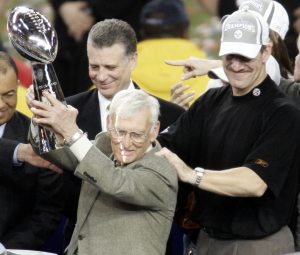 Share your memories from this week in Steelers history in the comments section below.  And feel free to share with your Steelers friends (show them how smart you are about Steelers history).