Pittsburgh Steelers Hall of Fame wide receiver Lynn Swann took to Facebook to give Steeler Nation his thoughts on the release of wide receiver Hines Ward after 14 years with the team. The 2 minute and 45 second clip comes off as a State of the Union address and Swann has never been shy about letting his opinions known about Steelers players. Most recently Swann chimed in with his thoughts on Ben Roethlisberger during the week leading up to the Super Bowl. Swann has backed the organization and the Rooney family publicly for some time now and there certainly is nothing wrong with that. You can only imagine the backlash the team is receiving from fans right now that do not understand why Ward had to be let go. It makes you wonder if Swann may have been prodded by the organization to record this as to help ease the pain to many of the fan base. I am in agreement with everything that Swann says in the video statement, but I am struggling with him feeling the need to have it shot in front of that self portrait, as it has somewhat of a Kenny Powers feel to it. In case you can\’t view the address on Facebook, I have transcribed it below. 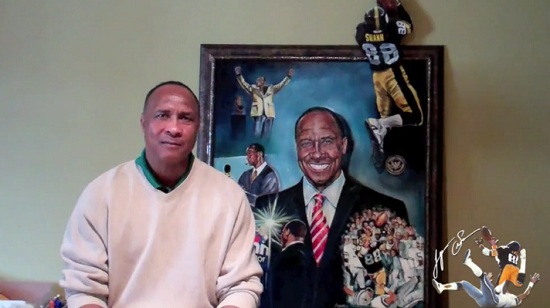 For all of those Steeler fans that are concerned about Hines Ward, I think Hines Ward is a future Hall of Famer. I believe that his dedication, his work ethic, his success, on the football field speaks volumes about the kind of person he is and what football meant to him and what playing for the Steelers meant to him. I wish him nothing but success with whatever path he chooses. Many of the past great players for the Steelers have left for different reasons. Some were injured and left before their time. Some went on to other careers and others were released because there was not a balance between what they wanted to do, their contract, and building the team for the future. The Steelers have been very successful as an organization. You can\’t argue with the success of the Rooney\’s and their coaches have had since the 70\’s. The founder, Art Rooney, his son Dan, and Dan\’s son, Art II, have been phenomenal at choosing the right coaches to make us competitive and making the tough decisions to make sure that we can win championships. Have a chance to win championships every single season. These things are not easy, and again, you can\’t argue with that success. As a fan, it\’s always hard for us to see our favorite players decide to leave the game or have to make a move to go elsewhere. Hines Ward will always be in my book, a Pittsburgh Steeler, for what he gave this team and what the team meant to him. So I think we should all give Hines our support. We should always give the Rooney\’s and Coach Tomlin our support because they are making these tough decisions to make sure we maintain our competitive edge and we can compete in the future to bring more Super Bowls to the city of Pittsburgh. Success is never easy. When you take your children to games, when you take your family to games and you think about the years, and maybe the road trips that you went on to Cleveland, or to Super Bowls, and watch the guys play, and that player is no longer there. Emotionally it always hurts. Emotionally that can\’t be replaced and you wish that it could always be the same, but in order for us to continue to grow and be the best we can, whether we are talking about the Pittsburgh Power or the Pittsburgh Steelers, we need to make some tough decisions. So the Steeler Nation should always stand behind those players that they love and respect, and have been great for this ball club, like Hines Ward, but also stay true and close to the people that are making the hard decisions to make sure that we are competitive down the road. Thank you.