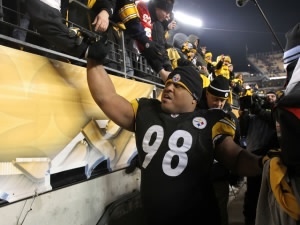 It was 2001. The Pittsburgh Steelers had drafted two wide receivers in the first round the previous two years (Troy Edwards and Plaxico Burress). The Steelers were targeting defensive linemen, and for the first time since 1990, they ended up doing something they very seldom ever do; trading down. The result was that the man they wanted – Marcus Stroud out of Georgia – was picked by the Jacksonville Jaguars 13th overall. At the time, Coach Bill Cowher said, “If you don\’t get Dan Morgan, you\’ve got the next best player down the middle.” Cowher was talking about Casey Hampton.

The Steelers were so convinced they could get Hampton (Texas) that they traded the 16th pick to the New York Jets for the 19th pick, plus fourth- and sixth-round picks. Not having a third-round pick due to punishment for a salary cap violation involving Will Wolford (a former offensive lineman), the Steelers then traded up with the New England Patriots and grabbed Kendrell Bell (Georgia) at inside linebacker. In a draft sensation, the Steelers ended up with Hampton, Bell and former St. Louis linebacker Mike Jones (who replaced Levon Kirkland) and were able to create a revived interior defense in less than 24 hours. Dan Morgan went to the Carolina Panthers with the 11th pick of the draft.

The most interesting part of the tale is what happened after the draft.

During the 2001 season, Dan Morgan started 11 games at weakside and strongside linebacker, posting 75 tackles, one sack, an interception and a fumble recovery. During his second season, Morgan helped re-define a Panthers defense that had struggled since the team\’s inception and led the team to Super Bowl XXXVIII. In 2007, Morgan was placed on injured reserve due to an ankle injury and then released after the season. The New Orleans Saints signed Morgan to their 2008 roster, however, Morgan retired, stating that his recovery after a partially torn Achilles tendon wasn\’t going as planned. Although Morgan filed reinstatement papers with the NFL for the 2009 season with the Saints, Morgan once again called it quits after a strained calf muscle in minicamp. He never played another down in the NFL.

Marcus Stroud gave the Jacksonville Jaguars a twin to already powerful John Henderson. The pair was considered to be one of the most dominant defensive tackle duos in the NFL. Stroud was selected to the Pro Bowl following the 2003, 2004 and 2005 NFL seasons.  In 2005, Stroud was involved in a traffic accident when his SUV rolled on Interstate 10 outside of Jacksonville, Florida. Losing a step or two on and off the field, Stroud was suspended in 2007 for four games for violation of the league\’s policy on anabolic steroids and related substances. Jacksonville traded Stroud to the Buffalo Bills in 2008 for third- and fifth-round picks in that year\’s draft. After signing with the Bills, Stroud spent a mere two seasons with the team and was released on Feb. 16, 2011. In March of that year, the New England Patriots signed Stroud to a two-year contract, but released him on July 28.

In retrospect, the Steelers ended up with a more consistent player in Hampton. Some could argue the best of the three Bill Cowher and Kevin Colbert looked at that day in 2001. Then defensive line coach John Mitchell said of Hampton, “There\’s three things I like about him. He\’s a no-nonsense guy, and football is important to him. He\’s been well coached. And he stays on his feet, and you can\’t make plays in the NFL without staying on your feet.”

It didn\’t take Hampton long to step into the middle of the defensive line for the Steelers. As a rookie, Hampton started the final 11 games of the regular season plus two postseason games for the Steelers, replacing Kimo von Oelhoffen (who moved to defensive end). Hampton finished his rookie season with 33 total tackles, one sack and a fumble recovery.

Hampton soon proved that he could be highly disruptive in the middle of the pack, and it earned him a trip to the Pro Bowl for the first time in 2003. Hampton missed most of the 2004 season due to a right knee (anterior cruciate ligament) injury. In 2005, Hampton was named the Steelers\’ co-MVP (with Hines Ward), finishing the season with 43 tackles. He helped propel the Steelers defense to the rank of first in the AFC in total defense and third in the NFL in rushing yards allowed per game. In Super Bowl XL that season, Hampton recorded four solo tackles and his first ever career post-season sack for a loss against Seattle Seahawks quarterback Matt Hasselbeck. His sack sealed the win for the Steelers.

Since 2001, Casey Hampton has become a premier defensive lineman in the NFL. He has earned five trips to the Pro Bowl (2004, 06, 07, 08, 09). During the 2007 season, Hampton was named to the Steelers\’ 75th Season All-Time Team. On Feb. 25, 2010, Hampton signed a three-year contract with the Steelers. Although Hampton will spend most, if not all, of the 2012 season on the PUP list, it is easy to see why the Steelers and Kevin Colbert expect Hampton to return to the roster in 2012. He has become an anchor to their defense.

In 2001, Bill Cowher said, “He\’s a Pittsburgh Steeler. He\’s our guy. We\’re happy to have him.” Draft expert Mel Kiper said, “Cat-quick. He\’s strong and gains an immediate leverage advantage… [he] never stops until the whistle blows.” Kiper had Hampton ranked as the 8th best defensive tackle in the NFL Draft that year.

Casey “Big Snack” Hampton was worth the wait in 2001. For the Steelers, it may be worth waiting for him to heal rather than letting him go. When Kevin Colbert was asked about the 2012 season, he said that the Steelers “need to re-tool.” Perhaps Colbert and Head Coach Mike Tomlin will find a way to repeat similar success in the 2012 NFL Draft that brought Hampton to Pittsburgh over Morgan and Stroud on 2001.