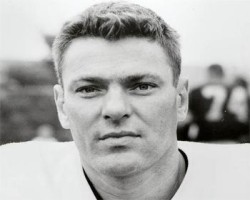 Jack Butler was one of four former Steelers players to make the final list of possible inductees into the Pro Football Hall of Fame in Canton, Ohio; class of 2012.  The fact that it has taken so long for one of the NFL and Steelers\’ best defensive backs to do so has been somewhat of an enigma.  That he should join those players already enshrined is an understatement.

John B. “Jack” Butler was born on Nov. 12, 1927 in Oakland (PA), but grew up in Pittsburgh.  Although most die-hard NFL and Steelers fans have heard his name over the years, most cannot recall ever seeing him play.  His is a bygone era; sadly, one that might have been forgotten had the HOF Selection Committee not made a decision that Jack should join the ranks of professional football elites.

Butler grew up near Forbes Field in Pittsburgh.  He may have ended up just another local boy that went to a Catholic prep school, but he didn\’t.  Butler\’s father sent his son to Mt. Carmel College High School in Niagara Falls, Ontario, to study the seminary.  Studying at Catholic school wasn\’t an unusual thing for kids his age in the region.  Butler\’s best friend was his neighbor Frank Thomas.  Jack Butler wasn\’t there to play football.  After graduation, Butler and Thomas both moved closer to their boyhood homes and entered  St. Bonaventure to continue their studies.  Both young men decided that the life of a priest wasn\’t their calling, and both chose professional sports; Butler football and Thomas baseball (for the Pittsburgh Pirates).  Before entering St. Bonaventure, Butler had never played in an organized football game in his life.

Interestingly enough, Butler had a talent for the game regardless of his lack of formal training.  In the end, Butler was only one of twelve players from St. Bonaventure to make it into the ranks of professional football.  Under head coach Joe Bach, Butler played mostly at defensive end and on the offensive line.  His size wasn\’t necessarily a good fit for either position, but he was tenacious.  Father Dan Rooney, known as Father Silas, was the St. Bonaventure athletic director, and he took notice of Butler\’s abilities.

Butler\’s father was a Pittsburgh native and a friend of Art “The Chief” Rooney, brother of Father Silas.  Although there may be some dispute as to who influenced Jack the most to try out for the Steelers, his father played a role as did Fran Fogarty and his sandlot games with the two oldest boys of The Chief.  In his book Ruanaidh, Arthur J. Rooney, Jr. said as much.  Father Silas brought Butler\’s name up to Art Sr., and suggested that the Steelers allow the young man to attend tryouts.  Bob Davis quickly saw that Butler had better skills as a defensive back at training camp.  While the ever stubborn head coach of the Steelers of the day, John Michelosen, allowed Butler to practice, he had his eyes on a player from Pitt.  AJR, never one to meddle in the affairs of his head coaches to much extent, allowed Michelosen to make his decision.  Butler\’s brother was told that those who wanted to remain with the team should stand out, so Jack started lining up for the first spot in training drills.

Butler himself gives credit to Fogarty for his leaving college to try professional football in the first place.  Butler was quoted as saying,

I fully intended to go back to school. [Fogarty] called from the Steelers and asked me if I wanted to try out for the team.  I thought, \’Hey, this is a terrific way to spend my summer.  I wont make the team, but it will be a great way to pass the time.\’  I never went back to school.

The Pitt player that Micheloson loved so much ended up being drafted into the military.  Butler, who had an ailing mother that needed his care, received a deferment.  Going undrafted in 1951, Butler joined the Steelers as a defensive back.

Butler\’s relatively short career (1951-1959, only 103 games) was the makings of a fantastic highlight reel.  During his time with the Steelers, Butler made 52 interceptions and trailed only Emlen Tunnel and \’Night Train\’ Lane in numbers.

Butler\’s best game came against the Washington Redskins on Dec. 13, 1952.  He recorded four interceptions, one of which resulted in a 35-yard return for a touchdown to seal the win for Pittsburgh 14-13.  Against the Giants in New York, Butler had been moved to offense to help with receiving duties.  Jim Finks found Butler open for a late touchdown.  After scoring, Butler then kicked the point after.  It wasn\’t unusual to see Butler on both sides of the ball.  His athletic ability, durability and power tackling was a much needed asset for the Steelers in the 1950s.

Butler\’s professional football career as a player tragically ended on a play that went wrong.  While he was not the cover man, he still managed to have his knee traumatically injured when Philadelphia Eagles tight end Pete Retzlaff went down on top of him.

Butler went on to continue working with the Steelers organization; this time as a scout/manager.  He worked 44 years in that position close to Art Rooney Jr. , who headed the Steelers\’ player personnel department.  When Butler retired in 2007, Rob Kisiel was hired to replace him, but his influenced had reached far into the NFL.  Butler was a key component to BLESTO; the brainchild of Buddy Parker (Steelers),  Russ Thomas (Lions) and Vince McNally (Eagles).  Art Rooney Jr. was there in the beginning as well.  The BLESTO plan was to help the Steelers, Lions and Eagles collaborate college scouting efforts, and Butler was one of the best.  In 1965, one year after its beginnings, the Chicago Bears jumped into the loop, as did the Vikings a bit later.  Changed to BLESTO V, it is the only other college scouting combine in existence today other than the National.

Statistically it is difficult to argue that Butler wasn\’t one of the NFL\’s all-time great defensive backs and players.  His 52 interceptions placed him at number two on the All-Time list at the time of his retirement as a player.  He set the Game-Highest All-Time record for forced turnovers with 60.2 percent.  A five-time Pro-Bowl selection, Butler played in four Pro Bowls.  In 1957, Butler led the NFL in interceptions with ten.  Among his many awards, Butler was named to the NFL Team of the Decade – 1950\’s, NFL 50th Anniversary All-Time Team and selected by the Steelers for their 50th and 75th Anniversary teams.

Amazingly, Jack Butler scouted and evaluated over 75,000 college athletes.  His combine scouting process is still in use today.

As his health is fading, Jack Butler is due for a Hall of Fame induction.  He deserves a spot among the elite because he was elite.  He set standards in the NFL that many players and coaches still look for in their athletes.  He set standards in scouting that coaches and general managers still emulate.  While Butler may not see his induction as the greatest day of his life, many will.