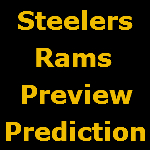 It seems like the Pittsburgh Steelers just returned back from blacked out San Francisco and now they must turn around quickly, lick their wounds and host the 2-12 St. Louis Rams today at Heinz Field. Starting quarterback Ben Roethlisberger will not start this game due to his bad left ankle, but could be in uniform just in case of emergency. The Rams are a very depleted squad and that certainly will be just what the Steelers need on a short week. As I do every week, here are my 7 things to look for against the Rams as the Steelers look to move to 11-4 on the season along with my score prediction.

No Action Jackson – The Rams offensive attack will undoubtedly run through running back Steven Jackson, who needs just 34 more rushing yards to become the seventh player in NFL history to gain 1,000 yards in seven or more consecutive seasons. Jackson has been productive this season behind an offensive line that has seen a lot of shuffling and he runs down hard and violent. Not only will Jackson be used to carry the ball, he will likely also be used as a safety valve in the passing game for quarterback Kellen Clemens, who will make his second straight start since being signed off of the street three weeks ago. Jackson caught 9 passes for 72 yards against the Cincinnati Bengals last week in the Rams 20-13 loss. He is averaging 4.4 yards per carry this year heading into the game and the Steelers defense will need to key on Jackson on early downs and spy him out of the backfield in addition.

Seeing More Red? – Steelers running back Mewelde Moore is out this week with an MCL knee sprain, so Isaac Redman could see extended work as the third down back Saturday in his place. Starter Rashard Mendenhall was also was dinged up last week against the San Francisco 49ers with sore ribs, so Redman could very well dip into a few of his carries as well. Redman has earned the extra playing time and has managed a 4.2 yards per carry average on just 83 carries thus far this season. He has also chipped in 14 receptions in addition. Mendenhall was not on the injury report this week, but it makes sense not to over work him in the final two games as to make sure he is 100% for the playoffs.

Long Day For Long – Left defensive end Chris Long is easily the Rams best player on defense and has recorded 13 sacks and unofficially, 10 quarterback hits to go along with 49 pressures. Long of course is the son of Oakland Raiders great Howie Long and you can tell that the pedigree is there. Steelers rookie right tackle Marcus Gilbert will have his hands full in pass protection with Long and must keep him away from old man Charlie Batch, who will get the start in place of Roethlisberger. The Steelers figure to run more on Saturday than normal and that is not a part of the game that Long has mastered yet. Look for them to test him early and this will be a fun match-up to watch.

Secondary Concern – The Rams secondary has been ravaged by injuries this season and with Justin King unlikely to play, that leaves Roderick Hood, Josh Gordy, Chris Smith and Nate Ness as the only available cornerbacks. Gordy is not 100 % either, so if the Steelers offensive line can give Batch some time, Mike Wallace and Antonio Brown should have no problem getting open. Batch only threw two passes when he mopped up the first half against the Cleveland Browns after Roethlisberger left injured and he looked rusty. It is hard to give him a true assessment with just a few snaps, but we should know early on in this game if Batch was deserving of the backup job he has owned all regular season.

Lights On For Deebo – Steelers right outside linebacker James Harrison will be back this week after serving his one game suspension, and although he was missed dearly Monday night against the 49ers, the rest certainly had to do him good. He needs just two sacks to reach 10 on the season and would become the first Steelers player since sacks became an official statistic in 1982 to record four consecutive years with at least 10 sacks. Harrison will be going up against Rams left tackle Adam Goldberg, who has surrendered just 6 sacks all season. Look for Harrison to try to turn the lights out on the Rams passing game.

Getting Ziggy With It – Steelers left defensive end Ziggy Hood has not been right since the win against the Arizona Cardinals and only has 2 quarterback pressures since then. Playing defensive end in the Dick LeBeau system usually means maintaining gap control and letting the linebackers reap the rewards, but Hood has had his problems in the second half of the season and has been non-existent getting a consistent push. Rams right guard Bryan Mattison should be just what Ziggy needs. Mattison was claimed off waivers from the Baltimore Ravens at the end of November and has not been overly impressive in his last two games. If Hood struggles in this game, it may be time to worry about the Steelers 2009 1st round pick. Ziggy has been battling a little groin pull as of late, but the standard is the standard when he plays.

Reward Ward – Hopefully the Steelers can mix in a few early passes to Hines Ward in the scripted plays and get a big enough lead in the fourth to feed him a few more easy catches as he closes in on a 1000 for his career. 9 catches will be tough for him to get Saturday, but 4 or 5 are obtainable if things go right. Ward said on Thursday that he has no plans to retire after this season, and that if he does not play for the Steelers in 2012, it will not be his choice. You never know how things will play out though in the end and it would be nice if he could hit the 1000 catch milestone this season. look for him to get quite a few more snaps this week.

Steelers Rams Prediction – The Steelers have an uncanny ability to play down to their competition at times and it may take a quarter or so for Batch to knock the rust off. The Rams two strongest assets are their running game and their defensive line, but both are very containable for the Steelers in this game. The Steelers are heavy favorites, but it would not surprise me if they did not cover. They should get the win, but it might not be heavy on style points.