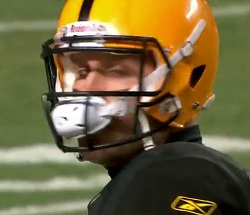 Pittsburgh Steelers head coach Mike Tomlin had a great line last week when asked about Cleveland Browns wide receiver/return man Josh Cribbs when he said, “We\’ve been dead Indians in his cowboy movie enough.” While this post has nothing to do with Cribbs, that quote immediately circled back through my head upon seeing Steelers quarterback Ben Roethlisberger limp back out on the field to start the second half. It looked like something out of an old western movie, like a cowboy that had been shot in the leg, or ankle in this case, and continued to walk towards the next fight.

We all can admit how bad the injury looked, after the NFL Network showed it to us 15 times, as the ankle of Roethlisberger was trapped and twisted under the pile of bodies lead by Scott Paxson. Paxson of all people and a former Steeler. Go figure. The way Ben needed to be helped off the field and into the lockerroom surely made you think he would not return for the rest of the game. Although I had my doubts about him returning, the good news at the half was that the X-rays were at least negative. I thought to myself at least that is some encouraging news, but we will have to find a way to win this game without him.

When Roethlisberger came out to warm up for the second half by taking snaps on the sideline from Doug Legursky, I thought that my eyes were fooling me. It did not take me long though to sober up and face the fact that it was just Ben being Ben. You have to cut the head off the snake if you want to kill it. You have to see the cowboy in a pine box until you believe he is dead.

As much as I and others have been aggravated by Roethlisberger in the past for his off the field stupidity, or alleged stupidity, there is no denying that he is one tough SOB. We all have made the drama queen remarks about him in the past, as it is easy to do considering he loves to talk about all of his injuries both minor and major. He also likes to let the world see and know that he plays through them. It was obvious that he feels he still doesn\’t get his due as an elite NFL quarterback after all of these years during his sit down interview with Michael Irvin. He has a right to have a chip on his shoulder though as many of the experts still fail to rank him any higher than 6th or 7th in the league at the position despite his three Super Bowl appearances and two championships.

It will never be pretty all the time with Roethlisberger, it will however continue to be amazing. I said on Twitter last week after the re-watching the game against the Bengals that his pocket presence is truly amazing and a joy to watch. Preaching to the choir I know. While this coincides a little with his escapability, it still takes knowing how to sense the pressure and how and when to step right into the pocket, and sometimes the line of fire to make a great play. It was good to see Mike Mayock, who in my opinion is one of the best football analyst right now, mention this last night in the broadcast. Roethlisberger is not afraid to take a bullet. Just like a western movie cowboy.

While we still do not know if the Roethlisberger high ankle sprain will force him to miss the game next Monday night against the San Francisco 49ers, you have to remember that this is a national Monday night broadcast with an even larger viewing audience then there was Thursday night. Roethlisberger lives for these types of moments. He lives for them to talk the next several days about how tough he is and how this time it might be too severe of an injury for him to play in this game.

By the time kickoff against the 49ers rolls around, don\’t be surprised to see Roethlisberger saunter out onto the field with a well distinguished limp and hitch. That\’s what cowboys do, that\’s what Roethlisberger is.