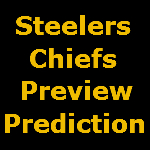 The bye week has come and gone and so begins the Steelers final stretch of 6 games that starts Sunday night on the road against the Kansas City Chiefs. With the Ravens winning Thursday night against 49ers, it is looking more and more likely that the black and gold will have to run the table and hope for a Raven slip up in order to win the AFC North. The Steelers have won their last three games coming out of a bye by an average of 21.3 points and this match-up certainly plays into another one of those big type wins.

Linebacker LaMarr Woodley will likely miss his third straight game due to his hamstring injury, but wide receiver Emmanuel Sanders will likely return to the lineup after missing the last two games following minor knee surgery.

As I do each and every week, here are my 7 things to watch for this week against the Chiefs as the Steelers look to move to 8-3 on the season. At the bottom is my score prediction for the game and I will have my week 12 NFL picks and predictions up for the other games later tonight or first thing in the morning along with my prediction of the inactives for Sunday night.

Lining Up For Pressures – Chiefs second round draft pick Rodney Hudson will make his first career start at left guard in place of the injured Ryan Lilja, who is out with a concussion. Both right tackle Barry Richardson and left tackle Branden Albert have not been good this year with Richardson being the worst of the two in pass protection. Outside linebackers James Harrison and Jason Worilds, who figures to make his third straight start in place of the injured Woodley, both should gave a field day getting after quarterback Tyler Palko. Should Palko try to hold the ball in the pocket, the Steelers front seven must make him pay.

Bronco Riding – Doug Legursky has fully recovered from his dislocated toe injury that he suffered against the Jaguars back in week 5 and will get the start at left guard over the recently demoted Chris Kemoeatu. In his only other two starts this season at left guard against both the Titans and the Jaguars, Legursky only allowed just 1 quarterback pressure in 41 pass blocking opportunities. Legursky must show he has not lost his short area quickness or mobility as the Steelers will look to run their Counter 34 Pike play quite a bit against the Chiefs 3-4 defensive front. That play requires Legursky to pull right and take out a linebacker to make the play work and it was the strongest part of Kemoeatu\’s game. The Steelers have been running well to the left as of late and that too must continue with Legursky back in as a starter.

Blowing Bubbles – The Steelers offense has been punishing defenses that choose to play off-coverage on the outside receivers this year by using the quick bubble screens to either side. It enables quarterback Ben Roethlisberger to get the ball out quickly and into the hands of his speedy receivers. Even when the play does not go for 5 or more yards, it can force tighter press coverage on future plays that will play into the hands of both Mike Wallace and Antonio Brown and their ability to beat the coverage over the top. Expect offensive coordinator Bruce Arians to run this until the Chiefs respect it Sunday night.

Thumbs Up – The talk this past few weeks has been all about the fractured thumb on the throwing hand of Roethlisberger after he injured it against the Bengals a few weeks ago. He has had the luxury of the bye week to rest it and get re-acclimated to the splint and glove he will be forced to wear Sunday night. The biggest concern will be if it affects his accuracy and if it will limit his ability to throw deep. His completion percentage in this game will be closely scrutinized should the Steelers somehow end up losing this game. Roethlisberger will have to play through the pain and comfortability factor and the Chiefs secondary is ripe for the picking if he can deal with both. This hasn\’t been a problem for Ben in the past and it should not be one against the Chiefs.

Turn Back Tamba – The Chiefs defense has only recorded 12 sacks on the season with 7 of them being provided by outside linebacker Tamba Hali. Hali seems to be back on course judging by his play against the Patriots this past Monday after being quieted the previous two weeks against the Dolphins and the Broncos. Much like Terrell Suggs of the Ravens, Hali will line up on either side and attack the open end, so tackles Max Starks and Marcus Gilbert will both have opportunities to go up against the Chiefs talented pass rusher. Gilbert has allowed 3 sacks in the last two games, but the welcomed bye week should have given him time to recharge and rest his troublesome shoulder.

Three Headed Running Back – The Chiefs three head rushing attack consisting of Dexter McCluster, Thomas Jones and Jackie Battle has been very productive the last 2 games as they have combined to rush for 227 yards on 44 carries for a very healthy 5.15 yards per carry average. The Chiefs will want to run early and often in an attempt to keep the Steelers offense on the sideline and take the pressure off of Palko in the passing game. The Steelers front 3 must do a good job at holding the point of attack and the linebackers must effectively shed their blocks and wrap up quickly. Getting Palko in obvious passing situations as many times as possible really tilts this game in the favor of the Steelers. Look for Lawrence Timmons to have a big day on the stat sheet in the tackle column.

Remember 2009 – We all remember what happened the last time the Steelers faced the Chiefs back in 2009 when Jamaal Charles took the opening kickoff back 97 yards for a touchdown. The Steelers offense scratched and clawed back to take a 17-7 lead at halftime, but could not put the Chiefs away in the second half and it resulted in a 27-24 overtime loss. The Steelers jumped out to a 14-0 lead against the Bengals before the bye, but could not put them away and had to rely on the defense to make a big play late in the game to preserve the win. Coming off the well needed bye week, they must put the Chiefs away early in this game and not allow the recently acquired Kyle Orton the opportunity to come off of the bench to be an unlikely hero.

Steelers Chiefs Prediction – There is absolutely no reason to think the Steelers will not take care of the Chiefs this week coming off of the bye. The Chiefs are also working on a short week after playing Monday night. For the Steelers to lose they would have to give up a few big special teams plays and turnover the ball 3 times like they did back in 2009. Palko is no better than an average back-up NFL quarterback and Orton has had just 2 days to get acclimated to his new team. Should the Steelers jump out early on the scoreboard and stop the run, it should result in an easy win. The Chiefs might get a late garbage touchdown in this one to make it look closer than what it actually was.