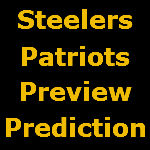 Week 8 is here and it is indeed Patriots week as the Steelers come back home to Heinz Field to host the New England Patriots. The Steelers will once again be without James Harrison, Doug Legursky and Chris Hoke this week, while Hines Ward and James Farrior are looking less likely to play by the hour. While not a must win game for the Steelers, it certainly will not hurt things if they were to win this week and settle the score next week against the Ravens. It would give them the inside track at winning the AFC North based on the remainder of the schedule. As I do each and every week, here are my 7 things to watch for this week against the Patriots as the Steelers look to move to 6-2 on the season. At the bottom is my score prediction for the game and I will have my week 8 picks and predictions up for the other games later tonight.

No YACing Allowed – Patriots wide receiver Wes Welker and tight end Rob Gronkowski have combined for 602 yards after catches this season which equates to 28% of the passing yards put up by Tom Brady this year. Brady is getting it done by throwing passes 20 yards or shorter in the air in addition. Around half of his passing yards have come on passes 10 yards or shorter. The Steelers defense must keep the Patriots receivers in front of them and wrap up quickly after the catch. They have been good at this through the first 7 games and it must continue on Sunday.

Don\’t Get Caught In Base – The Steelers defense will play quite a bit of dime defense this week with 6 defensive backs on the field. They have to be careful when they do go to base defense that Brady does not catch them in it and run his hurry up offense to better exploit match-ups and the two linebackers in the middle. Lawrence Timmons will be forced to start outside in place of Harrison again and Farrior is now likely to be out or extremely limited with a calf injury. That leaves Larry Foote and Stevenson Sylvester as the inside backers in base defense and Sylvester has yet to see a snap on defense this season. If caught in base long, Steve McLendon or Casey Hampton need to go down with cramps if you get my drift.

Explosive Bugatti Boys & A Former Jet – Regardless of Mike Tomlin trying to praise the Patriots defense on Tuesday, their secondary has been just as bad without big leads as they have been with them. They also surprisingly released cornerback Leigh Bodden on Friday so that means Devin McCourty and Kyle Arrington will start on the corners and Antwaun Molden should see time in the nickel. The Patriots will likely do their best to take away Mike Wallace deep, so Emmanuel Sanders and Antonio Brown should have very winnable battles. Despite Ward likely being down with an ankle injury, Jerricho Cotchery is more than capable of working the soft areas and could end up being a big X factor in this game. He also knows the Patriots well after playing them twice a year while with the Jets.

Wang Chung Don\’t Forget To Run – If strong safety Patrick Chung decides to play back and not help in run support, the Steelers might have some success running the ball. As much as they will want to go pass heavy, they can not totally abandon the run unless they get way behind early. Marcus Gilbert, Ramon Foster, Heath Miller and David Johnson need to be on their run blocking games Sunday and should have the numbers to their advantage most of the day. The Steelers do not have to run great in this game to win, just good enough to bring play action or the threat of run into play. It would not surprise me however if they break a few 20 yards or more. Running well also means time ticks off the clock more and that is less time Brady can be on the field as well. Should Chung be forced down in the box, it will up the deep ball down-field even more.

Dare Them To Run – The more the Patriots try to run, the better for the Steelers, assuming they are not able to break off big chunks of yardage in the process. Once again, running keeps the clock moving and the more the Steelers can do to shorten the game the better. Brett Keisel and Ziggy Hood will likely see extensive playing time once again and must force the runs inside to help.

Better Get Home On Blitzes – I do not expect the Steelers to blitz much Sunday, but when they do, they better come from up the middle and more importantly they better get home when they come. Brady is great at getting the ball out quickly so these need to be timed perfectly. Brady is also a master at getting defenses to declare early and show their cards. It might be better served to show blitz most of the day, but come just a few times when he is lulled into thinking it is just another bluff.

Finish Them – It goes without saying that finishing drives in the redzone is always important, but even more-so against an offense like the Patriots. Just ask the Cowboys about that, as a few weeks ago they did everything right for the most part in that game except for scoring touchdowns inside the redzone. Settling for 3 is a win every time for the Patriots in this game and redzone efficiency will be highly scrutinized if this is a close game and the Steelers end up losing.

Steelers Patriots Game Prediction – The Steelers have not had much success against the Patriots over the years and we really do not know just yet the true identity of the 2011 team. Last week was as of complete of game they have played all season, but it was far from perfect. The good news is that quarterback Ben Roethlisberger is in a good groove right now and the secondary has been very consistent in their play. Regardless, good quarterbacks have been patient over the years at picking them apart and taking what is given them. The injuries to Ward and Farrior are not as big of deal in this game as you would think they would be and the Steelers can win this game without both with the talent they will field on Sunday. I have a funny feeling that Dick LeBeau has something up his sleeve in this game and like the Steelers chances more than most. On the flip-side, this game can get out of hand real quick. In the end, I think it will be a close game and not as high scoring as most think. That being said, first one to 27 wins and it I see Roethlisberger pulling it out on a final drive. This one goes under by 1 point and the Steelers cover.