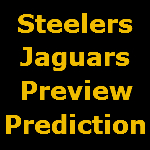 The Steelers are back at home for the second week in a row to host the 1-4 Jacksonville Jaguars. The Steelers injury list remains long, but they received solid play last week from the back-ups and put together their best all-around game this season, last week against the Titans. As I do each and every week, here are my 7 things to watch for this week against the Jaguars as the Steelers look to move to 4-2 on the season. At the bottom is my score prediction and I will have my week 6 picks and predictions up for the other games later tonight.

No Big MoJo – Despite the Jaguars 1-4 start, running back Maurice Jones-Drew has a stellar 5.0 yards per carry average and has already amassed 476 yards rushing, 3rd best in the AFC. He leads the league with 15 runs of more than 10 yards and remains a huge threat as a pass catcher out of the backfield. He can run both inside and outside as the Jaguars too like to run the stretch play that has given the Steelers defense fits up until last week. The main key to the Steelers winning this game is to stay gap sound against a very mediocre Jaguars offensive line and wrap Jones-Drew up on first contact. Getting the Jaguars into 3rd and long situations is where they will really have the advantage in this game.

Stopping On A Dime – Defensive coordinator Dick LeBeau broke out the DIME (big nickel) last week with James Harrison out and Lawrence Timmons shifting outside to replace him. Ryan Mundy came in at strong safety and Troy Polamalu dropped down in the box to utilize his speed and awareness. Polamalu was everywhere last week down low and LeBeau will once again use him to try to confuse rookie quarterback Blaine Gabbert with different looks. Polamalu not only helped against the short passing game last week as he also blew up a few run plays as well as screen from down in the box. LeBeau is 11-1 against rookie quarterbacks and has held them to a 47.5 passer rating in his time with the Steelers. Look for various blitzes and looks out of the DIME this week.

Make Their Linebackers Wear Two Helmets – The Jaguars defense has not been bad this season especially against the run. It is all because of the play of their linebackers flowing to the ball and fighting off blockers in the process. If the Steelers expect to run effectively, they will need to do so by getting an offensive lineman out in space or h-back through the hole to get a helmet on one of them. The Steelers will catch a break as Clint Session has been ruled out this week and Daryl Smith is getting over a head injury. That leaves Paul Posluszny inside as the only healthy starting linebacker. Look for the Steelers to attack Kyle Bosworth, who will likely play outside in place of Session.

Make That Guy Whimper – This could be a huge game for LaMarr Woodley as Jaguars right tackle Guy Whimper has allowed 3 sacks, 9 pressures and 3 quarterback hits through the first 5 games. He is slow to the edge and Woodley should dominate him. The Jaguars have not been great at providing their tackles help either in the form of a tight end or a running back. When Woodley drops into coverage, Ziggy Hood will be asked to provide some b-gap pressure against a very below average right side of the Jaguars offensive line.

Don\’t Be Scared Of Rashean – Jaguars cornerback Rashean Mathis has made a mini career against the Steelers in the past, but it is not enough to warrant staying away from him. Mathis has not been good in coverage this year and has allowed a passer rating of nearly 130 when he is thrown at. Mike Wallace and Antonio Brown could have big days if Ben Roethlisberger is given time to throw the ball. Starter Derek Cox will also likely be out this week for the Jaguars as well so William Middleton will likely start opposite Mathis.

Rashard Return – Rashard Mendenhall returns as the starter this week after sitting out with a bad hamstring against the Titans. Mendenhall did dress last week, but did not play. He watched Isaac Redman and Jonathan Dwyer combine to rush for 156 yards last week that included a 76-yard scamper by Dwyer through a huge hole. Watching that game last week likely opened the eyes of Mendenhall and all eyes will be on him this week to improve on that performance. He must slam runs inside much quicker and take his 3 yards instead of dancing around for 1 or negative yardage. I look for him to rebound this week against a pretty solid Jaguars defensive front.

Get The Kids Some Work – The Steelers hopefully will have this game in the bag by the 4th quarter so they can get players like Stevenson Sylvester, Chris Carter, Curtis Brown and Cortez Allen some well needed snaps. Carter and Allen are the only two on that list to see defensive snaps thus far this season and it hasn\’t been many at that.

Steelers Jaguars Game Prediction – I am not going to sugar coat this. There is no reason why this game should be close. The Jaguars are starting a rookie quarterback behind a below average offensive line with a very bland receiving core. Jones-Drew will be the main focus, but it is hard to see them scoring more than 10 points on offense. As long as the Steelers offense does not turn the ball over, this should be a romp. Anything less than a cover will be a huge disappointment.