Steelers head coach Mike Tomlin was asked today during his Tuesday press conference about the unnecessary roughness penalty early in the game on safety Ryan Clark after a false start was called on Titans tight end Craig Stevens. Tomlin replied, “Your guess is as good as mine. I\’m still trying to figure that out. I know that Byron Boston, who was on our bench, was blowing the whistle, but I don\’t know if any other whistles were being blown and that runner was running. It\’s unfortunate; we\’ve just got to do a better job of continuing to emphasize the whistle in the game of football in my opinion.” Tomlin was pushed further on the play and he replied, “My contention is that if we are vigilant about blowing the whistle, then those actions don\’t even occur.”

Tomlin has a great point and argument when you go back and re-watch and listen to how it unfolded. The play in question happened on a 3rd and 7 from the Titans 44 yard-line with 13:47 left in the first quarter. On the play, Titans quarterback Matt Hasselbeck hit Javon Ringer out of the backfield with a pass and Ringer ran up the far sidelined. On the broadcast replay you can faintly hear one whistle at the snap and the play continues on. Ringer gets hit in bounds by William Gay, James Farrior and finally Clark. The loud whistles are not heard until milliseconds before Clark makes contact with Ringer, who is lowering his head for contact as well. Ringer was very much still in bounds and the replay shows that nobody on defense heard the first whistle as they all are pursuing the ball.

The play cost the Steelers big time as the unnecessary roughness penalty overrode the false start. Instead of the Titans having a 3rd and 12, they had a 1st and 10 at the Steelers 41 yard-line and luckily the drive culminated in just a field goal.

It will be a sin if Clark is fined. I originally thought the hit was out of bounds and that was the reason for the flag. That was not the case and Clark should not be flagged for the referees not doing their job and better blowing the play dead.

Have a look at the screen caps below. 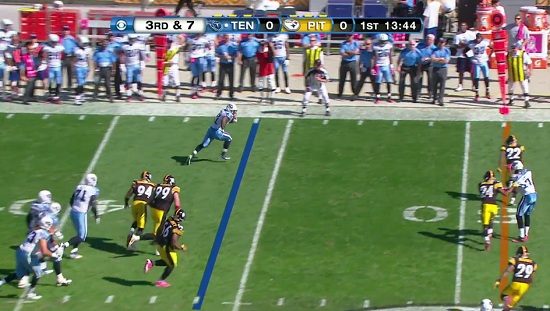 You can see it the first picture that Ringer is still running hard with the ball while several Steelers players pursue. Look at the referee in the middle of the picture as well. He is not blowing his whistle or waving off the play. He does not even know the play is dead. How can the players be sure? 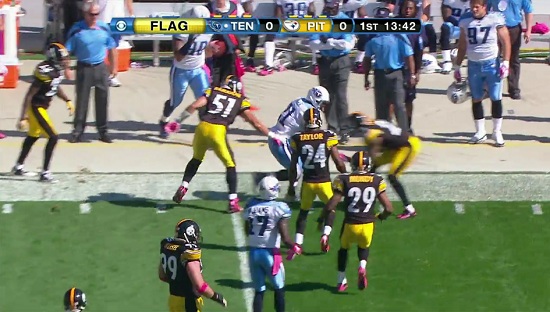 Whistles can start to be heard right about know in this frame as Ringer is still in bounds and both he and Clark are ready to make contact. There is no way either can pull off here in my opinion. 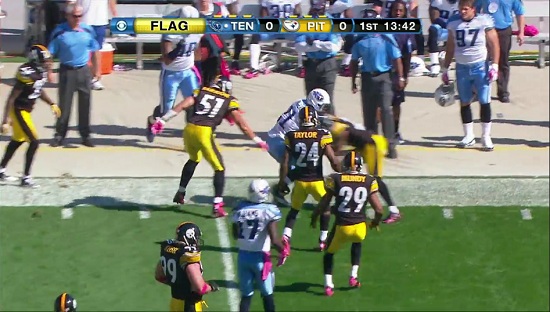 Pretty harmless contact here as Clark is trying to play through the whistle. Ringer is indeed still in bounds. 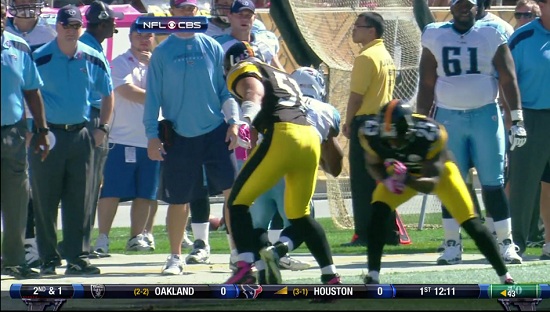