Below are the offensive personnel packages, play counts and participation chart for the Steelers week 1 loss to the Baltimore Ravens on Sunday. The Steelers used the 1 personnel grouping 14 times on Sunday that featured 1 tight end and 4 wide receivers on the field partly because of the hole they dug themselves on the scoreboard. I expected about half that number yesterday. Outside of that, nearly half of the 61 offensive plays saw the 11 personnel grouping of 1 running back, 1 tight end and 3 wide receivers.

Running back Isaac Redman saw 8 of his 13 snaps late in the game, so I would not read too much into that. Antonio Brown saw 20 more snaps than Emmanuel Sanders and that too is not surprising to start the season. Their numbers will be interesting to watch over the next few games. Rookie Wesyle Saunders only saw the field 4 times on offense in 3 tight end sets. Outside of that, nothing really sticks out from the game. 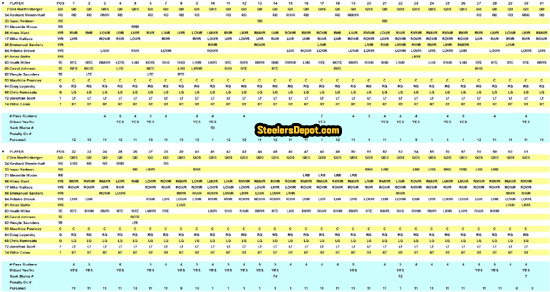