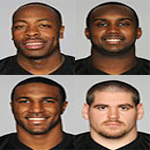 Last night I tweeted that everyone should keep in mind that the Steelers have (3) restricted free agent tenders and (1) exclusive rights free agent tender still pending with quarterback Dennis Dixon, tackle Tony Hills, safety Ryan Mundy and center Doug Legursky. I will now expand on that tweet and refresh your memory on what these exactly mean and the impact they might have on the rule of 51 salary cap total.

These tenders are exactly what they mean, tendered contracts to restricted free agents and took place prior to the start of the lockout.. It is easiest to start with exclusive rights tender to Legursky, who has no option but to sign his tender if he wants to play next season. He can\’t entertain offers from other teams and must accept the league minimum for his accrued years in the league. That amount will be in the neighborhood of $500,000 or so and of course is a one year deal. Once he signs it, it will barely move the rule 51 salary cap total as he will be near the bottom of the top 51 salary cap hits on the offseason roster.

Dixon, Hills and Mundy are all restricted, but not exclusive. Each can entertain offers from other teams once free agency opens and the Steelers have the choice to match any offer any of those players receive or receive a draft pick from the team that signs them that corresponds to the round each particular player was drafted in as compensation. Hills would cost a team a 4th round pick, Dixon a 5th and Mundy a 6th.

While there is a possibility that all three could get some attention from other teams, I see Hills and Mundy as the least likely of them. Dixon on the other hand is the most likeliest to garner some interest from teams looking for a number two quarterback. The 49ers, Bills, Vikings, Ravens, Bears, Titans and Eagles are a handful of teams that come to mind right away as ones that might be willing to give Dixon a modest contract and relinquish a 2012 5th round pick (if they have it) to sign him. Looking at the Eagles in particular, they look poised to deal Kevin Kolb once free agency starts and would have virtually nothing behind Michael Vick if they indeed did so. That is just one of the more obvious fits for Dixon among many others.

I am pretty convinced that the Steelers would not put up a fight to retain Dixon as they look prepared to let Byron Leftwich back-up Ben Roethlisberger once again and let Charlie Batch serve as the 3rd quarterback. Should Dixon not get any offers, his contract tender is for one year and would pay him around $1.2 million in 2011. Should he sign it, Dixon would add around $870,000 to the rule 51 salary cap total as he would bump one of the minimum salaries off the list. The same goes for Hills and Mundy should the sign their tenders of $1.2 million. Should all three indeed sign, that would mean another $2.61 million added to the rule 51 total along with another $170,000 differential that Legursky would create.

Being as training camp will start very soon after free agency opens, I suspect all this to go down very quick. It would not surprise me to see Dixon wearing another uniform very soon and I do not think it would surprise the Steelers front office either. Let me also remind you that the tender offers are not guaranteed and include no signing bonus. These players can be cut at anytime without hits to the salary cap.