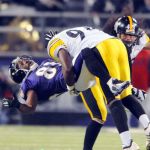 Baltimore Ravens wide receiver Derrick Mason is the latest to chime in on the Steelers-Ravens offseason smack talk when he tweeted in the direction of Steelers safety Ryan Clark yesterday. Mason tweeted, “I think Ryan Clark is cool ppl and a good player but RYAN let\’s keep the talking on the field. If the league wants to call this game a rival, Let them call it that! When we play each other it\’s good for football bc you know there will b a lot of hard hittin going on.”

Mason is of course referring to the comments Clark made this past Tuesday during his weekly appearance on 93.7 The Fan. Clark not only commented on the tweets made by Ravens running back Ray Rice about the Hines Ward DUI, but also inferred that the Ravens weren\’t the Steelers rival. During the interview Clark said, “I think for something to be a rivalry, both teams have to win equally.”

Mason seems to not be able to resist commenting on any words that come out of a Steelers player mouth this offesason thrown in the direction of the Ravens. The start of the smack talk this offseason can be traced back to the comments linebacker LaMarr Woodley made on NFL Total Access several weeks back when he was in studio as a guest analyst. Woodley stated at that time that quarterback Joe Flacco would not win a Super Bowl during his lifetime. Mason responded to those comments not long afterwards on ESPN First Take and said, “You can talk all you want during the offseason. No one plays the game, no one hits, during the offseason.” He also stood up for Flacco during that interview and called him the Ravens version of Michael Jordan.

Mason is right about one thing though as there will surely be a lot of hard hitting going on when the two teams meet in week 1 in Baltimore. There always is. I also doubt this is the last of the smack you hear between these two teams going forward. September is still a long ways away and Twitter never closes. Stay tuned.